3D printed character – ZBrush-Sculpteo competition winners give us their impressions

ZBrush France, in partnership with Sculpteo, held a competition on the theme “What if your favourite superhero was an animal?”

“Imagine a world where your favourite superheroes are animals: what if Batman was a fly? Or if a dog was hiding under Spiderman’s jumpsuit? Take an existing superhero and turn him into an animal!”

Participants had until December 5, 2010 to submit a 3D printed character model created with Pixologic’s ZBrush software and compatible with 3D printing.

You can view other participants’ models on the Zbrush France forum 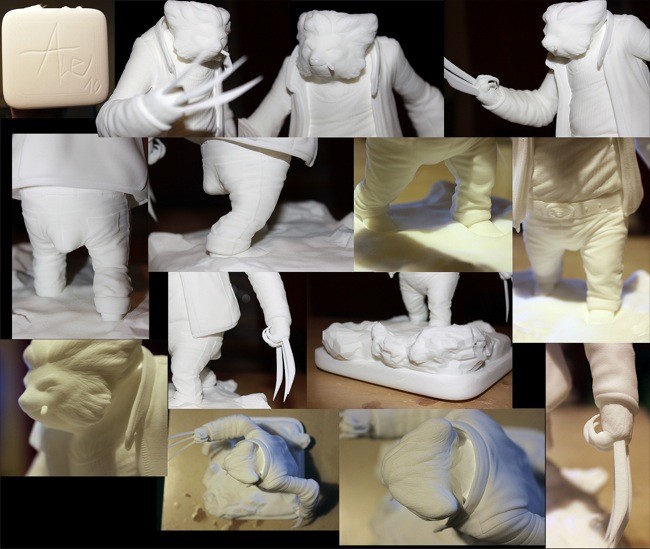 Could you briefly describe how you got the idea for your model, based on the proposed theme?

I initially intended to use Superman, my favourite hero, but Wolverine’s animal side seemed more appropriate for this competition…

I was about to go for a gorilla, but there was already an entry with that creature (Green Gorilla by Nephentes). I’m delighted that Kidd’s great Gorilla Wolverine is one of the winners.
After a while, I came up with the sloth, because of its long claws and the fact that it stands apart from its animal cousins with its very special character. The challenge was tougher than I expected, but with help from the zbrush.fr community and their valuable advice, I finished it in time.

You won a copy of your figurine produced through 3D printing. How did you feel when you first saw your design in the form of a real object?

My first feeling was pride; I felt lucky to be holding such a large figure of something I’d created with ZBrush – it was an old dream come true…

A 3D view is one thing, but having a real-life model of your design is a whole other world!

The next day, I took it to the studio to show colleagues. They were all impressed with the results, and some are now thinking of trying 3D printing themselves.

Do you plan to paint your model?

I wonder every day … I’m afraid of messing it up, so I’m trying to be patient and considering different options (maybe having it painted by professionals?)

For now, I’m keeping it as it is, and hopefully I’ll get a smaller, more modest 3D print that I can try to paint before I get down to my Sloth-Wolverine.

Now that you know a little more about 3D printing, have you thought of any other potential uses for it?

Using 3D printing as a means of validating a “look” during pre-production for art directors. Another idea would be to combine 3D printing with 3D scanning technology to obtain custom-made “busts”…

I think this is still a relatively new technology, but I believe improvements in 3D printers and more affordable prices for larger pieces such as mine could have revolutionary effects in the Arts world, for example, allowing people like me to fill their closets with their own creations. I’m already very impatient. 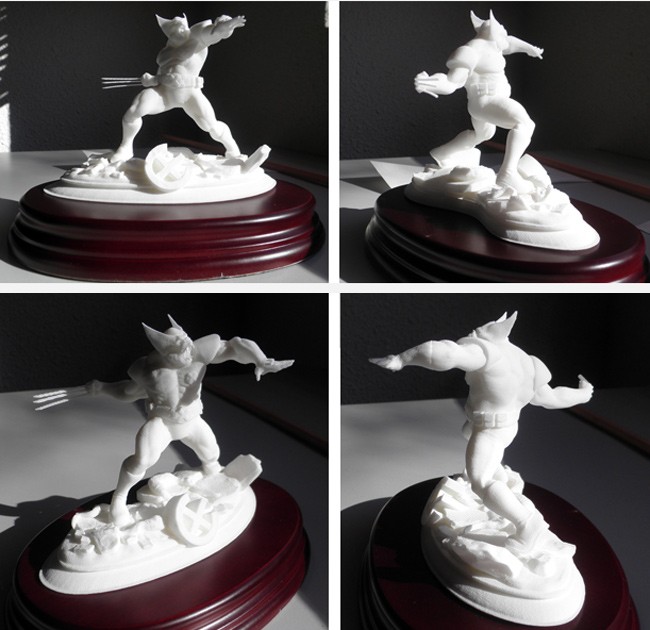 Kidd, who came 2nd in the competition with his Gorilla-Wolverine, also answered our questions.

Could you briefly describe how you got the idea for your model, based on the proposed theme?

I chose this superhero because he’s a character well-known and loved by all Marvel fans; I had made several attempts with other characters, but found that mixing a Gorilla and Wolverine was really dynamic and massive.

You won a copy of your figurine produced through 3D printing. How did you feel when you first saw your design in the form of a real object?

I was pretty sure the figure would reach me broken: I lost my bet because it got here undamaged, and all the details are still there.

Do you plan to paint your model?

I don’t yet know if I’m going to have my model painted: I’m personally not good enough but I know several figure painters who could do it.

Some figure stores (Warhammer, Games Workshop), have “pro” painters who can be paid to paint so-called “display figures”, those that are placed in the shop window to attract buyers.

Now that you know a little more about 3D printing, have you thought of any other potential uses for it?

I was familiar with 3D printing because I’m actually an amateur figure sculptor – I mean real sculpture – and have already made two or three models using a 3D printer that layers melted plastic wire through a nozzle. The result aren’t as good as your system, but I do believe it’s cheaper.