A low cost 3D Printer that use the same raw material as 2D printers : A4 paper 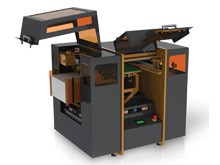 The Matrix 300 3D Printer from Mcor technologies use A4 paper as raw material, a hair-thin blade to cut single sheets of paper, and a water based adhesive to assemble them.

The idea goes back to 2003 when Conor MacCormack and his brother Fintan decided to build their own low cost 3D printer with low cost consumable.

“We thought that getting a 3D printer to work with A4 sheets of paper would be a brilliant idea.”