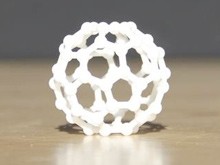 A Buckyball or buckminsterfullerene is a spherical C60 (Carbon-60) molecule. It was discovered in 1985 by Harold Kroto, Robert Curl and Richard Smalley at Rice University. They were awarded the 1996 Nobel Prize in Chemistry.

The name is an homage to Richard Buckminster Fuller, whose geodesic domes it resembles.

Buckminsterfullerene was the first fullerene molecule discovered and it is also the most common in terms of natural occurrence, as it can be found in small quantities in soot. It’s also the largest matter to have been shown to exhibit wave-particle duality

This 3D Printed Buckball was modeled by 3Diversity

You can find more about Buckyball on Wikipedia