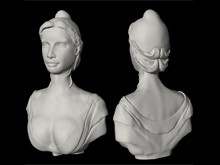 Marianne is a national emblem of France and an allegory of Liberty and Reason. She represents France as a state, and its values. She is displayed in many places in France and holds a place of honor in town halls and law courts.

In 1999, Laeticia Casta (famous French model) was ranked first in a national survey ordered by the “Association des Maires de France” to decide who should be the new model for the bust of Marianne. She became the model of Marianne for the year 2000.