Now you can 3D Print a Glacier! 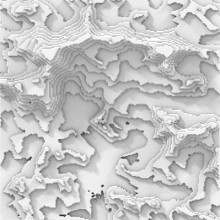 Cho Oyu is the sixth highest mountain in the world at 8,201 meters (26,906 ft) above sea level. Cho Oyu lies in the Himalayas and is 20 km west of Mount Everest, at the border between China and Nepal. The Nguzumpa glacier below Cho Oyu, at 36 kilometres (22 mi), is the longest glacier in the Himalayas.

Cho Oyu was first climbed on October 19, 1954, via the north-west ridge by Herbert Tichy, Joseph Jöchler and Sherpa Pasang Dawa Lama of an Austrian expedition. It was the fifth 8000 metre peak to be climbed, after Annapurna in June 1950, Mount Everest in May 1953, Nanga Parbat in July 1953 and K2 in July 1954.