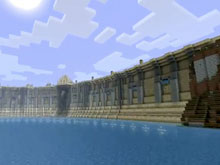 Matt, Phil and a lot of Minecraft players build structures that can take up to over 3 days to build.

On their blog, Matt and Phil explain:
“Having 20 people building in one timelapse video can become very crazy and you have no idea how to control those people but if you are a voice of reason and tell people that what they built is bad or good then it should progress pretty well; again as an example the floating island wasn’t planned, we were just building as we went and we couldn’t really argue about it because we were livestreaming it. On the flip side to that, The City of Arches had much more planning go into it, Phil and I both knew what we wanted to build and what style we wanted to go with, so we built to those aesthetic styling’s we had imagined… luckily enough they matched up when we amalgamated our ideas” 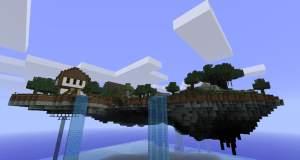 Watching these videos I was thinking about this collaborative 3D modeling process combined with the possibility to 3D-print the resulting 3D models using Minecraft.Print()