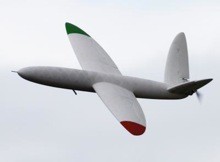 Engineers at the University of Southampton have designed and flown the world’s first ‘printed’ aircraft, which could revolutionise the economics of aircraft design.

SULSA (Southampton University Laser Sintered Aircraft) plane is an unmanned air vehicle (UAV) whose entire structure has been printed, including wings, integral control surfaces and access hatches. It was printed on an EOS EOSINT P730 nylon laser sintering machine, which fabricates plastic or metal objects, building up the item layer by layer.

No fasteners were used and all equipment was attached using ‘snap fit’ techniques so that the entire aircraft can be put together without tools in minutes.

The electric-powered aircraft, with a 2-metres wingspan, has a top speed of nearly 100 miles per hour [161 kilometers per hour], but when in cruise mode is almost silent. The aircraft is also equipped with a miniature autopilot developed by Dr Matt Bennett, one of the members of the team.

Laser sintering allows the designer to create shapes and structures that would normally involve costly traditional manufacturing techniques. This technology allows a highly-tailored aircraft to be developed from concept to first flight in days. Using conventional materials and manufacturing techniques, such as composites, this would normally take months. Furthermore, because no tooling is required for manufacture, radical changes to the shape and scale of the aircraft can be made with no extra cost.

This project has been led by Professors Andy Keane and Jim Scanlan from the University’s Computational Engineering and Design Research group.

Professor Scanlon says: “The flexibility of the laser sintering process allows the design team to re-visit historical techniques and ideas that would have been prohibitively expensive using conventional manufacturing. One of these ideas involves the use of a Geodetic structure. This type of structure was initially developed by Barnes Wallis and famously used on the Vickers Wellington bomber which first flew in 1936. This form of structure is very stiff and lightweight, but very complex. If it was manufactured conventionally it would require a large number of individually tailored parts that would have to be bonded or fastened at great expense.”

Professor Keane adds: “Another design benefit that laser sintering provides is the use of an elliptical wing planform. Aerodynamicists have, for decades, known that elliptical wings offer drag benefits. The Spitfire wing was recognised as an extremely efficient design but it was notoriously difficult and expensive to manufacture. Again laser sintering removes the manufacturing constraint associated with shape complexity and in the SULSA aircraft there is no cost penalty in using an elliptical shape.”