3D modeling and 3D Printing of the Olympic 2012 Stadium 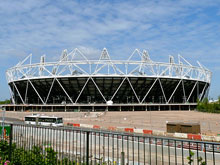 At 4:13 the model is 3D Printed using the FDM technology