The different technologies behind 3D Printing 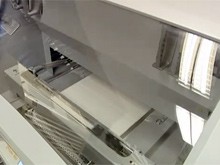 What we call “3D Printing” includes different fabrication methods. It would be more accurate to call it “Additive Manufacturing”. Only one technology works like printing and worth to be called 3D Printing: it’s 3DP.

– Stereo Lithography Apparatus (SLA) use a vat of liquid UV-curable photopolymer “resin” and a UV laser. Exposure to the UV laser light cures, solidifies the pattern traced on the resin. It was developed by Chuck W. Hull (co-founder of 3D Systems) in 1986

– PolyJet inkjet technology works by jetting photopolymer materials in thin layers onto a build tray layer. Each photopolymer layer is cured by UV light immediately after it is jetted. It was developed by Objet Geometries in early 2000

– Selective Laser Sintering (SLS) uses a high power laser to fuse small particles of plastic, metal (direct metal laser sintering), ceramic, or glass powders. It was developed and patented by Dr. Carl Deckard at the University of Texas at Austin in the mid-1980s, under sponsorship of DARPA

– 3 Dimensional Printing (3DP) uses an inkjet printing system to deposit a liquid binder that solidifies thin layers of powder. That’s the real “3D Printing” technology. It was developed at the Massachusetts Institute of Technology (MIT) in the late 1980s. This technology is licensed by several compagnies including ZCorporation

– Fused Deposition Modeling (FDM) uses a nozzle to deposit molten polymer onto a support structure. It was developed by S. Scott Crump (Stratasys co-founder) in the late 1980s and commercialized in 1990. The most famous DIY 3D Printers use the FDM technology.

– Electron Beam Melting (EBM) uses an electron beam to melt metal powder in a high vacuum. Unlike some metal sintering techniques, the parts are fully dense, void-free, and extremely strong. It was developed by Arcam AB