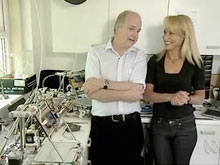 This ABC story is about the RepRap: an open-source self-replicating 3D Printer. The interviewee is Dr Adrian Bowyer, its inventor and senior lecturer in the Department of Mechanical Engineering at the University of Bath.

Imagine the industrial revolution in reverse, where it’s as cheap to create single items as it is to mass produce them. 3D printers have shrunk in size and cost over the past decade, enabling small design teams to sidestep the mass manufacturing process to make unique creations.

Jonica Newby travels to the U.K. to sample a flashy commercial 3D printer and the ultimate DIY workshop. Whether top of the range or in the backyard shed, 3D printers may have as profound an impact on the commercial world as the factory conveyor belt