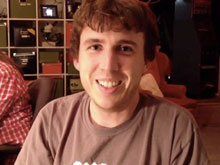 NYCResistor‘s Eric Skiff interviewed Chris Fenton, an electrical engineer living in NYC who built a mechanical counter with his MakerBot.

Chris found this idea in an old book of mechanical mechanisms. He explains it’s only part of a bigger project to build an electromechanical computer

Eric Skiff: “Why build an electromechanical computer?”
Chris Fenton: “Because I have a 3D printer, and I can”