Discover the designer behind the first 3D printed SLR camera

There has been lots of excitements around the next big thing in 3D printing with websites trying to rank the best objects to print. For almost two weeks now, a new 3D printed object has caught everyone’s attention, it’s called the OpenReflex. Its creator, Léo Marius, a young french designer, is the one behind this first open source 3D printed camera. 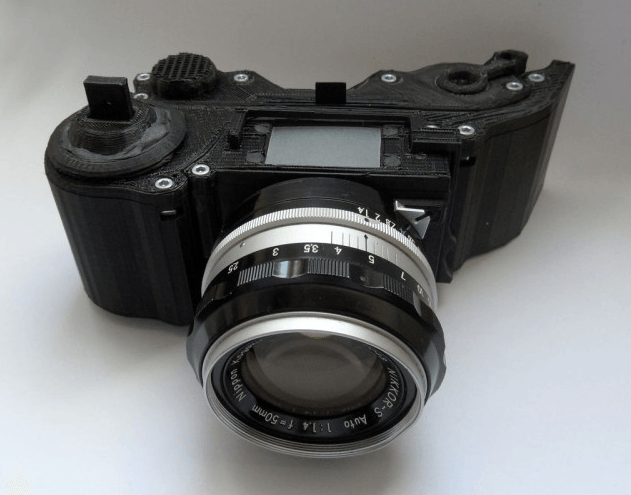 OpenReflex can be made at home for about $30. It combines 3D printed parts that can be made on a home filament 3D printer, pieces using a Laser-cutter, a few screws, magnets, plastic sheet, Sugru paste. It’s functional, and it looks really awesome! OpenReflex has been shared massively since it’s been published.

The instructions are freely shared on Instructables. The work in progress can be seen on Leo’s website. OpenReflex is fully Open Source, under the Creative Commons Attribution Share Alike license (CC-by-SA).

We reached out to him to know more about his project, and understand what are his plans for the future.

Sculpteo: Do you consider yourself as a photographer?

Léo Marius: I appreciate the work of photographers, but I don’t really consider myself as one. In fact I’m not that much interested in taking pictures, I rather like to understand the process of creating a camera. I have a small collection of cameras, and it’s mostly because I’m interested in the technics behind photography.

Sculpteo: Is it your first project using 3D printing?

Léo Marius: No, I’ve had the chance to access a 3D printer in my curriculum as a designer. Since four years, I’ve worked with a MakerBot bought by a student association. We also had a professional printer in my school, one Objet Eden 250.

Sculpteo: What kind of machine did you use to produce the pieces of your camera?

Léo Marius: The whole project has been prototyped on a Makerbot Replicator 2X.

Sculpteo: What was the biggest issue on this project?

Léo Marius: The shutter has been the biggest issue. Habitually a shutter is an extremely precise mechanical piece, and I had to adapt it and try to simplify it to the maximum. It has been hard to print. In the end, my shutter uses a completely different mechanism than the one you can see on a normal SLR camera. But it’s working.

Sculpteo: What is left to do on this project?

In a perfect world, I would like to make a better shutter. For instance, I’ve been thinking about using a string to trigger the shutter. That way, I could reach a much more precise exposure time. Also it could be great to adjust the whole design of the camera. The viewfinder still is too small and it’s difficult to adapt large lenses of this first version. Canon lenses are particularly large for example.

Sculpteo: Do you think about making more of this project?

Léo Marius: I would like to. My goal is to gather a sufficient community around 3D printed camera. With enough persons, I can imagine that we can accelerate, improve and crowdsource the development of new versions. If we think of the DIY community launched by Chris Anderson around drones, I can see something similar for this project. But I definitely want to keep the open source side of the camera.

Sculpteo: How long did you work on this project?

Léo Marius: I’ve had this in mind since quite a long time. I started an earlier version of it three years ago by producing a 3D printed pinhole camera. It laid the ground for some methods that I used for the OpenReflex . But the work around the OpenReflex itself took me three months full time.

Léo Marius: The goal of this project is mostly to let users understand how basic technology works. I think that a camera can play a role as a symbol. At the beginning, a camera was just a black box (camera obscura), and after a while it evolved so much that we have hundreds of functions on our cameras and we’re simply incapable to understand how they work.

Sculpteo: Did you need lots of help?

I worked alone most of the time. I extensively used internet resources to gather technical knowledge about SLR cameras. I met a few engineer of my school for precise questions and they helped me, but in the end I realized this first concept alone.

Léo Marius: Don’t! As soon as we’re beginning to make our own objects, we come to like it more and more, and soon you can’t stop! One advice though. Think of what you want to print and why you want to print it first!

Sculpteo: What’s your next project? A super 8 camera?

Léo Marius: No, I don’t think so. I’ve never been that much interested by video itself. But if someone want to make one, I’m ready to help. I want to bring the OpenReflex further, with a better shutter and why not some Arduino electronics to improve its functions.

Sculpteo: What’s your advice to anyone wanting to print one?

Leo Marius: You have to try! It’s really not that complicated. All pieces are designed for 3D printing, and none of them should be a problem. The assembly of the camera itself is not more complicated than a Lego Technics. Mostly, it’s exactly the way to start a community. Share your experience.

Sculpteo: Anything you want to add?

Léo Marius: Don’t hesitate to get in touch with me if you want to start making your own OpenReflex.

Sculpteo’s team is really excited about this project. We hope to present you a version printed with our white plastic material soon. We’re working on it with Leo’s help.