Most people know that 3D printing is great for engineers, product designers, hardware startups, and hobbyists. But there’s another group that’s adopting 3D printing in their business: marketing and communications agencies. 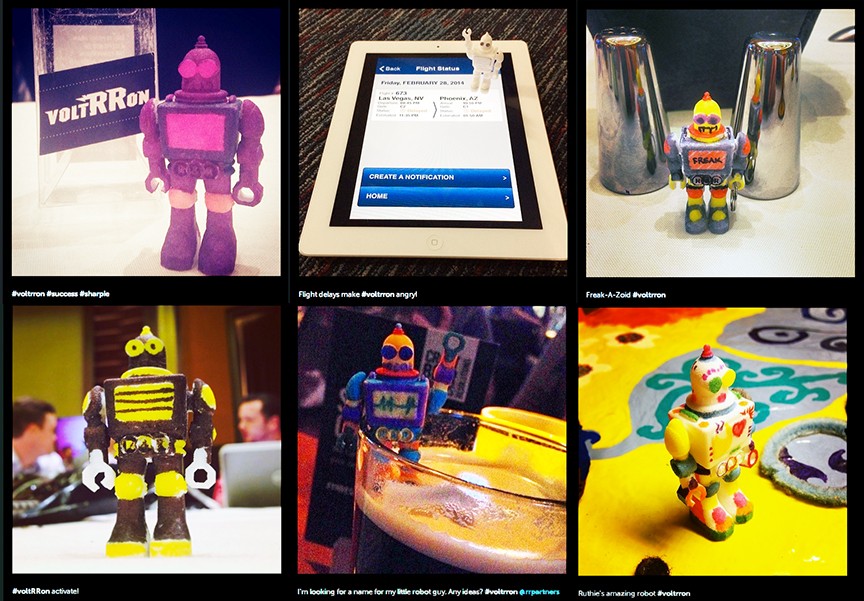 The robots were printed for the VoltRRon summit, a 3 day event bringing together all the employees from R&R Partners’ 8 different offices. The summit gathered everyone to meet face-to-face, showcase the company’s internal capabilities, lay out the plan for R&R Partners over the next five years, and have a really great time.

“The whole event was themed around the VoltRRon robot. We made posters, badges, bags and even created a coloring book,” says Ryan Christian, Lead Animator at R&R Partners. “All of these things were fun to work on, but I personally had the most fun creating and printing the 3D model,” he says. 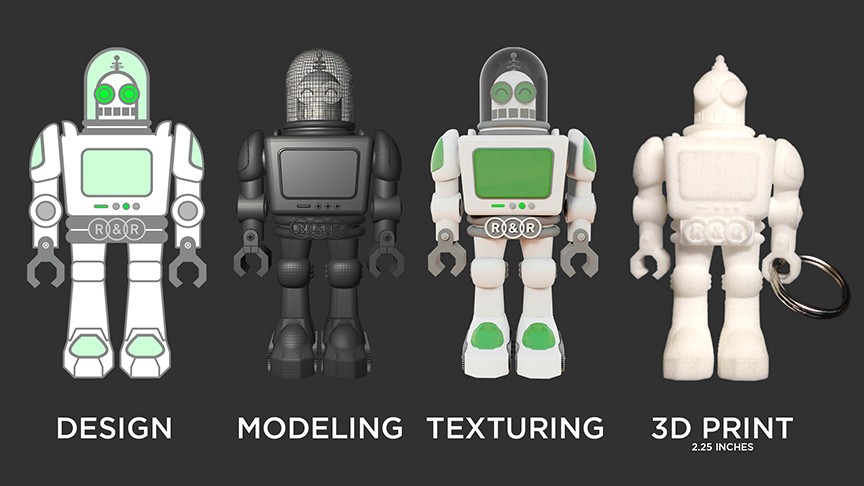 The initial concept was to create a desk decoration, “but at some point we decided we wanted it to be a keychain, and we also wanted to add movable/articulated arms,” Ryan explains. “We didn’t really know if that was possible, what types of materials existed or how much it would cost.”

That’s where Sculpteo came in. After contacting an account manager (ehhem sales[at]sculpteo[dot]com ), Sculpteo worked with Ryan to ensure he used the right 3D printing material for movable parts, had a model that wouldn’t break in production, and was optimized for the best possible price. “Nora [our account manager] even came to our Las Vegas office during CES to speak to our team about 3D printing,” Ryan says.

Then came the prototyping phase:

“Once we created the models and started ordering prototypes, we were very excited about how fast things were shipping, the turnaround time was about a week; no other 3D printing service came close to that.” 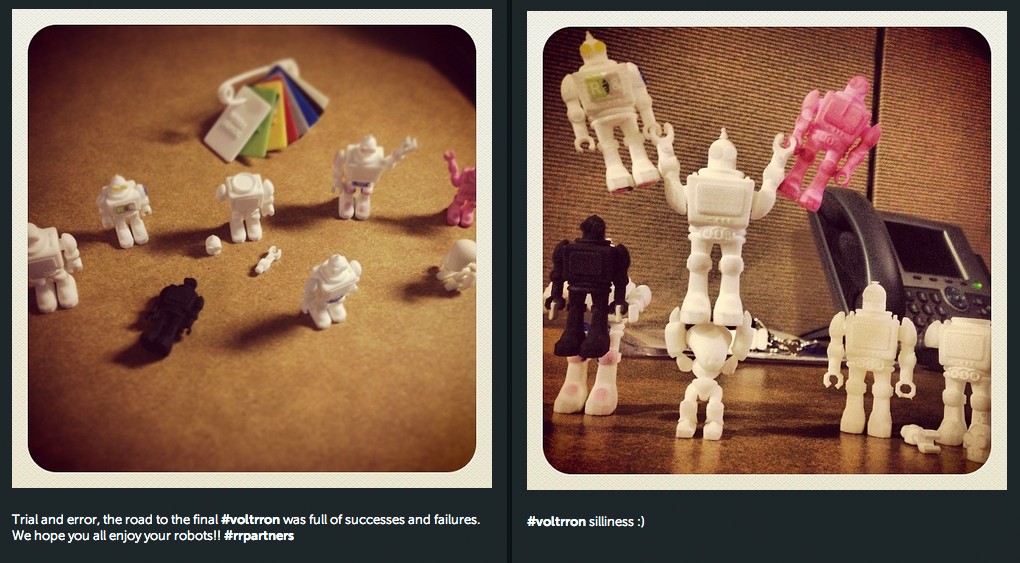 Above: Dismembered robot prototypes in white, black, and pink plus a material sample kit.

Ryan emphasizes the importance of speed, saying “Being able to print and receive the item within days, not weeks, is critical in the fast paced marketing/advertising environment that we work in.”

He was also pleasantly surprised by the strength of Sculpteo’s SLS plastic material, “At first we worried that the printed model would get destroyed in people’s pockets with keys, etc. but the plastic was so strong that this never became an issue.”

Ryan was also one of Sculpteo’s first customers to use Batch Control, a new feature that makes it cost effective to produce larger quantities with 3D printing.

“In the end we ordered 325 models of the VoltRRon keychain and received them in a week,” he says.

When we ask what were people’s reactions to a 3D printed robot, Ryan tells us everyone loved them: “Lots of people decorated their 3D printed robots and posted photos to twitter and facebook with the hashtag #voltrron. They were also intrigued by the fact that the movable arms of the robot did not need to be assembled. It drove home the idea that we can print things that are already put together.” 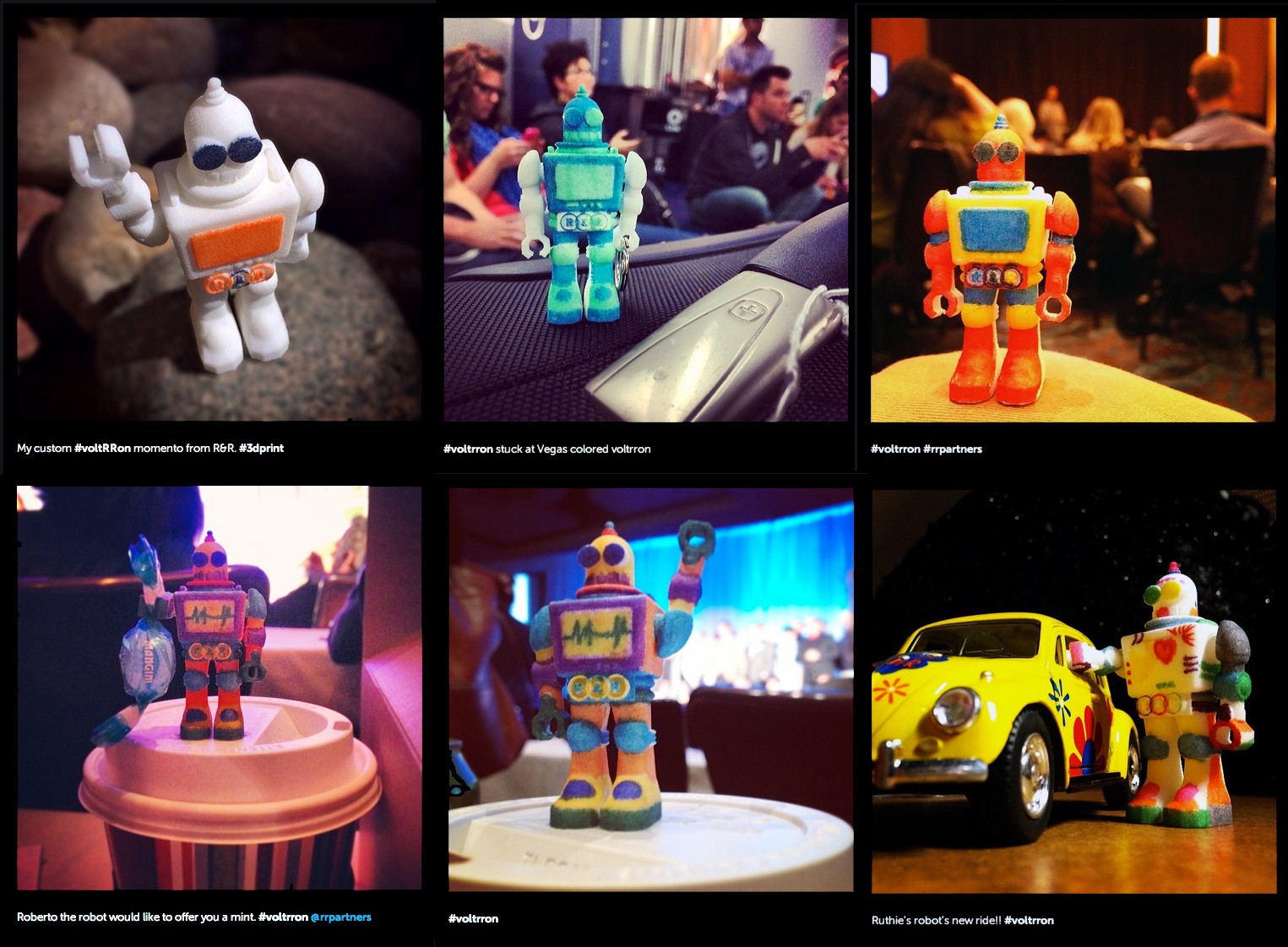 After a successful experiment with 3D printing internally, R&R Partners is excited about the potential for bringing 3D printing to clients: “I think we are ready and capable of integrating this technology into upcoming campaigns; it would certainly be a lot of fun.”

Thanks to Ryan for sharing his story!

If your marketing agency is interested in creating things with 3D printing, get in touch via email: sales[at]sculpteo[dot]com