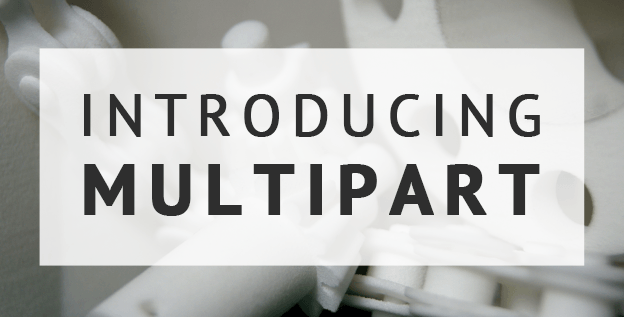 To give you the best online personal 3D printing center, we’re always bringing new tools to our online interface. After the Repair Tool, Solidity Check, Cut-Away View, Batch Control for short series, Hollowing to hollow your 3D model, we’re introducing “Multipart” to easily 3D print a file that contains more than just one part. Whether you want to 3D print an object with moving parts or an object that requires the assembly of multiple parts, Multipart let you choose between two options when uploading your 3D file.

The Multipart tool ensures that files with multiple volumes are printed correctly. It takes into consideration the minimum distance needed between objects and is able to separate them accordingly for a successful print.

Now, after uploading a 3D file with multiple parts, our cloud uploading system will count the number of objects in the file. It will then transfer to a new multipart uploading page, where you have the option to print the parts as a single, inseparable object or as a Multi-piece set. For instance, when we upload the  Sculpteo Robot, here is what happens. 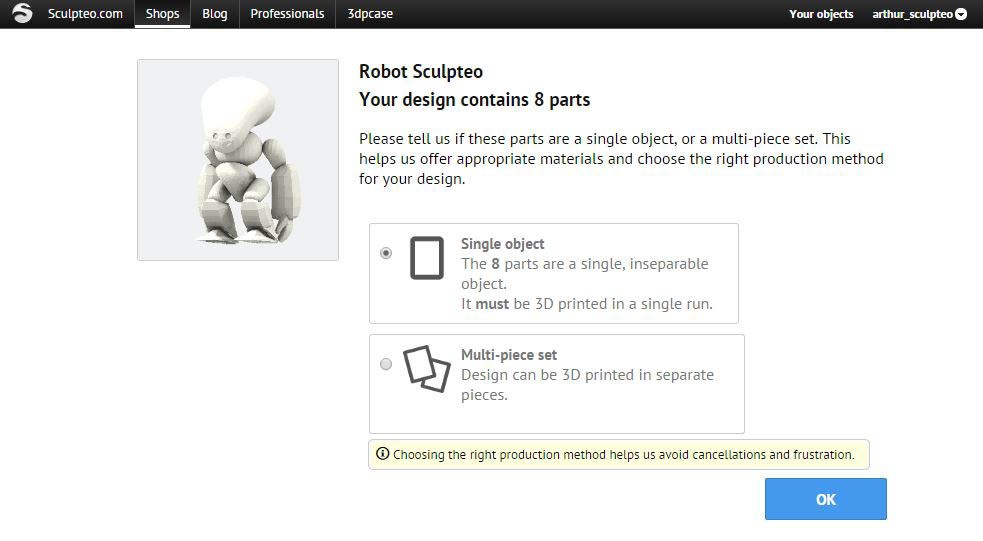 Since the Robot is a mobile objects that contains a few articulations, the Sculpteo upload tool counts 8 differents parts. To keep the object as such, you’ll need to select the “Single Print” option.

On the other hand, when you upload a file that requires to be assembled after the print, there is no need to upload the file of each part one by one. You can create a 3D file that containts all the parts. During the upload, our system will count them, and position them in a new 3D file so that it can be printed in a optimal way for the material you chose. In the past, we’ve allowed user to directly organise a bounding box with several parts in it. This resulted in many printing failures since the spacing between the parts was often not correct for an optimal production. From now on, orders passed selecting the Single Print option in such a case will not be printed and will be reimboursed.

All in all here is the critical path that you should follow if you want to print files that have more than just one part. You’ll have basically three cases: 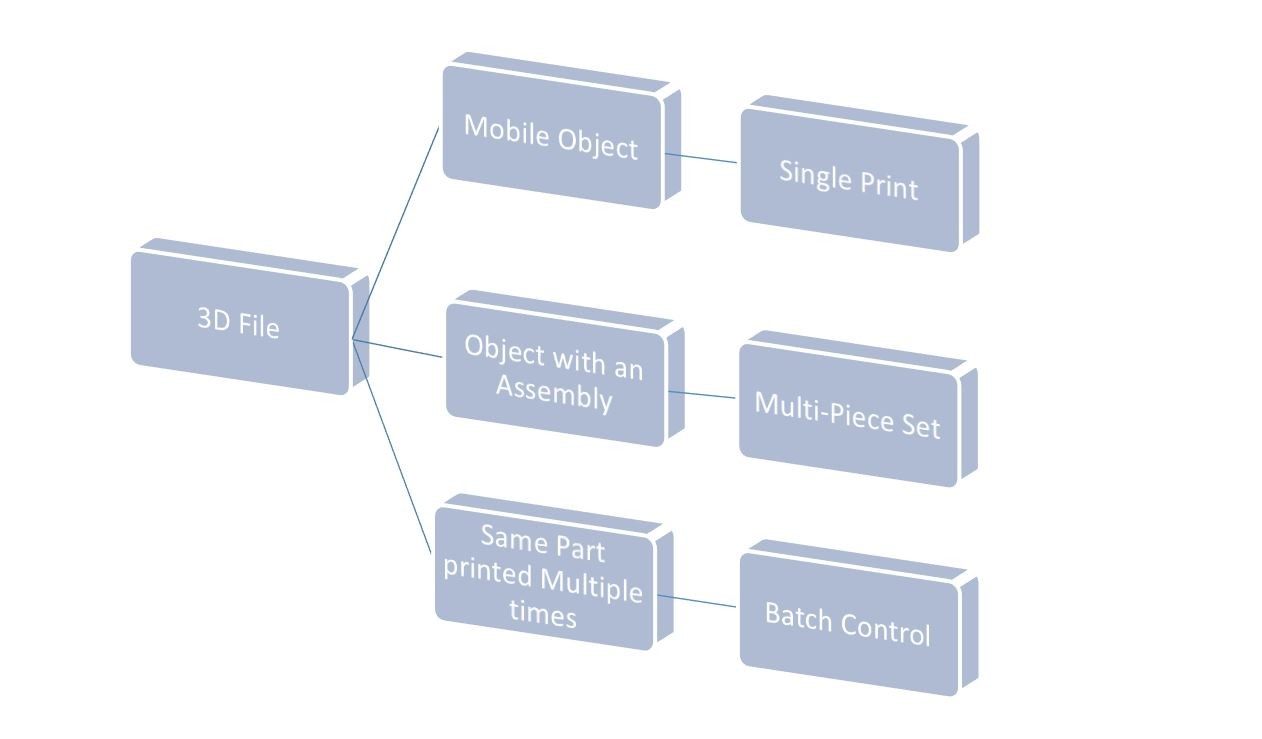 This new uploading step doesn’t change the pricing of Sculpteo’s prints. If you select a single print, we’ll charge you considering the object as a whole – as we did before. If you select a Multi-Piece Set 3D print, we are charging a minimum of six euros for each part since this means a human operator needs to manually process each part. For this reason, making multiple prints of a single same part should rather be done using Batch Control – plus you’ll have more control over the printing processes that way.

Finally, selecting a Multi-Piece Set print will make your 3D file appear differently in the section your object. You’ll now have the choice between ordering the whole Set in one click or selecting manually the part that you really need. 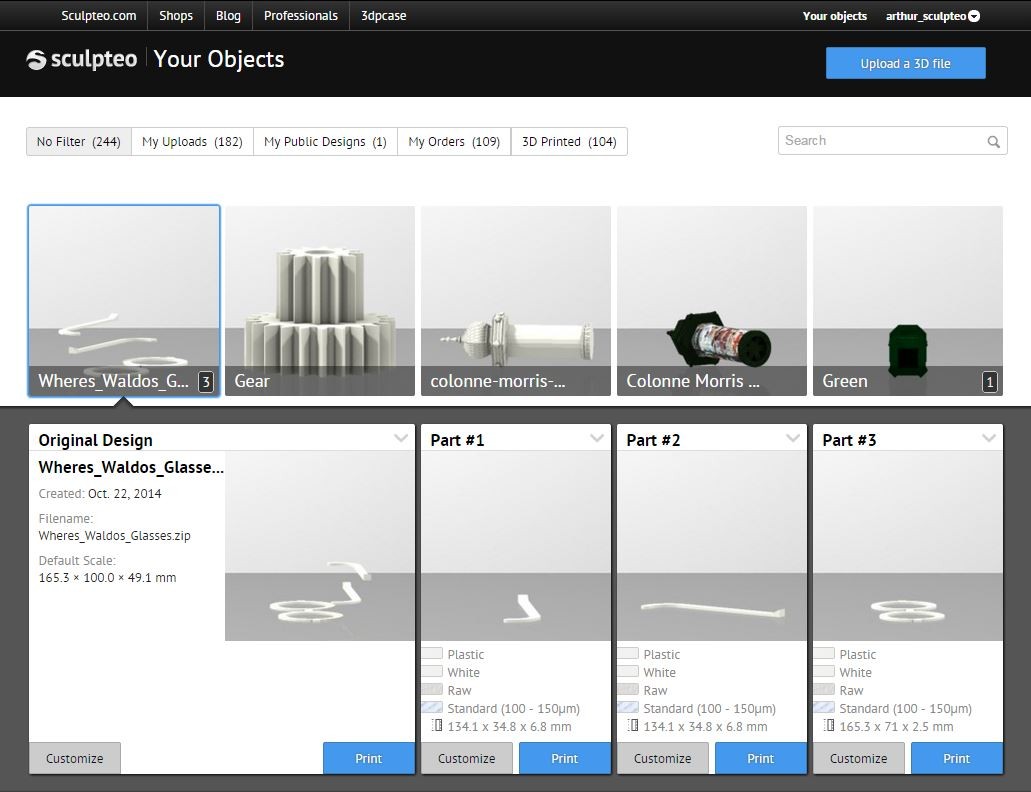 We hope you like this feature as much as we do. As always we aim at giving you the simpliest tools online so that you can work manage the life of your 3D files directly online once they’ve been edited in your 3D modeling software. Tell us what you think!