This past week was a big one in the 3D printing world, here’s a quick recap on some of the stories that caught our attention…

Everyone has been waiting this move for quite a long time. HP finally emerges in the 3D Printing world. Two days ago, they announced the upcoming release of their new 3D printer. It will use an entirely new technology called Multi Jet Fusion. According to Dion Weisler, Executive Vice President of HP, their technology will not only be 10 times faster than the ones we already know, but it will also allow electrical conductivity, color, and translucy. Here, at Sculpteo, we can’t wait to discover more about this astonishing technology.

Giving life back to demolished landmarks with to 3D Printing Technology

There’s no need to discuss the use of 3D Printing in the educational world. Those last months have seen so many creative projects related to 3D Printing being developed. At Ball State University, 3D printing is being used in more ways than one. Carol Street, Archivist for Architectural Records at the College of Architecture and Planning at Ball State University found a great way to interest her students. They began with Romanesque Revival building, torn down in 1967: 3D designing it from actual drawings was a great challenge. She found that her students who showed little interest in the drawings previously were now drawn to the 3D printed versions, and were spending more time comparing items on the print to those from the original drawings. A great Success Story!

How to turn a 3D Printer into a tattooing machine 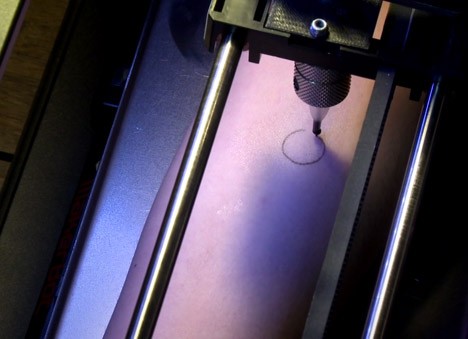 These two french designers finally did it: they crossed a tattooist’s needle with a Makerbot. And the result is incredible. Appropriate Audiences, who created the tattooing machine, called Tatoué, adapted software produced by Autodesk to turn tattoo designs into digital files that can be downloaded to the machine. A sensor reads the surface of the skin of the user, meaning the needle can respond to changes in skin texture and the dimensions of the limb. It offers a new tool for tattoo enthusiasts and tattoo artists, which offers plenty of possibilities. Anything the customer wants can be designed on the computer and replicated onto the skin. More complicated designs are to be printed. Can’t wait to discover more.