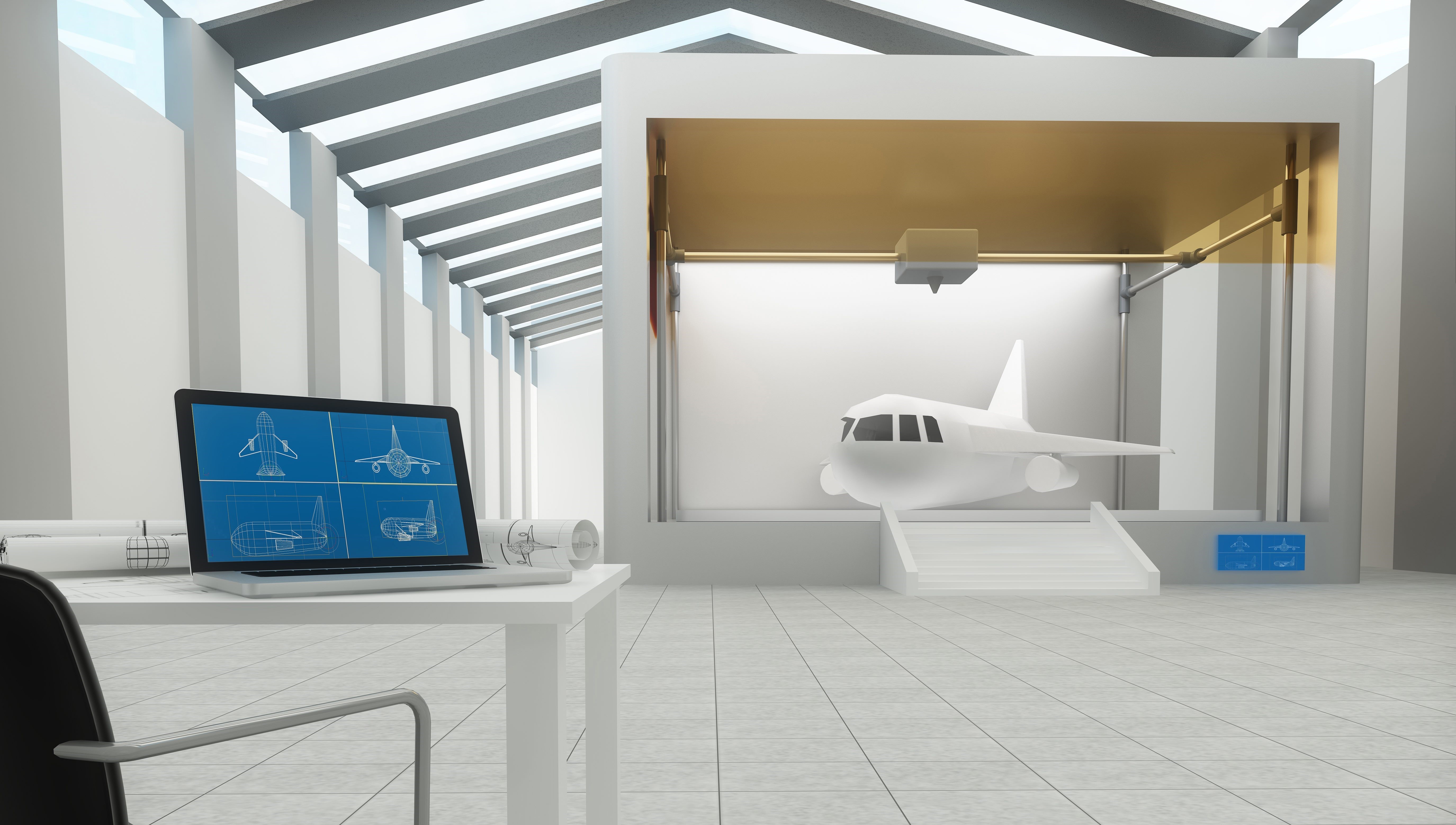 If there is an industry using 3D printing on a broad spectrum it’s aeronautics & aerospace. From early stage project visualisation to prototyping to complete production, this industry is leading the way in Additive Manufacturing (AM) technologies.

Let’s study current use and future use of 3D printing in the aeronautics & aerospace industry by studying concrete examples, from proof of concept to mass production. We will finish with what remains to be done in 3D printing for tomorrow’s space rocket and aircraft.

Let’s start with a little bit of history. It is important to notice that the aircraft industry is a 3D printing early adopter as many companies within this industry started using this technology in 1988, 4 years after the first patent on SLA technology was registered. Around this time additive manufacturing was primarily used for prototyping and it was uncommon to consider this technology for manufacturing. However, in the early 2000s, companies started studying the process in depth and thinking about parts that utilize the full range that this technology has to offer. . And who knows what the future will bring,  3D printed homes on Mars perhaps?

Revolutionizing the way parts are designed

One of the  most beneficial aspects of 3D printing is that it removes complexity related costs. In other words, a more complex part with intricate design will not cost more than a minimalist design, all other data being fixed. Thus, designers are not forced to create simple geometries to save money and forgo a design that may be more complex but will work perfectly for their needs. They can focus on creating the best part without having to bear in mind its production feasibility, complexity, or cost.

A good example of this principle is a contest created  by GE on GrabCad  to redesign an engine bracket with 3D printing in mind. 640 people entered the contest and the winner created a part that is 83.4% lighter than the original part: from 2kg to 327g! Although it seems like a small achievement, considering a 400 ton aircraft, the lighter the aircraft the more money is saved on fuel. By applying this kind of weight reduction to more pieces and equipment on the aircraft, you end up with a significant savings.

The original solid bracket and the winning bracket

Aerospace is not lagging behind in terms of early adoption of 3D printing technology, as you read this article a  satellite antenna support is orbiting the earth and it’s been doing so since April 2015 thanks to TurkmenAlem, a telecommunication company. In addition to TurkmenAlem, Thales has just finished the printing of the biggest DMLS aluminium part printed in Europe with two antenna support for satellites Koreasat 5A and Koreasat 7. Light yet complex 3d printed parts like these ones are extremely interesting in aerospace because sending a kilogram to space costs 21500€ on Ariane 5 and the total available weight is very limited. 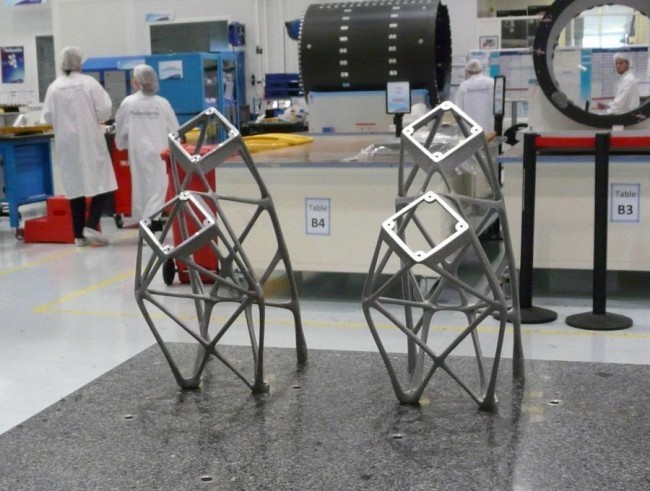 But 3D printing is not only enhancing high performance objects, it is also an incredible way to simplify the supply chain in order to produce 3D printed products in places just out of reach.

In 2014 “Made in Space” created a 3D printer designed to operate in zero gravity and low humidity rate. This 3D printer was custom created to work in space, and after it’s long voyage it finally arrived onboard the International Space Station (ISS).

The Made In Space 3D Printer. Photo Courtesy: Made in Space

It is currently working in the Microgravity Science Glovebox and  according to Niki Werkheiser, 3D Print project manager at NASA’s Marshall Space Flight Center in Huntsville: “[The printer] will decrease risk, decrease cost, and increase efficiency at the space station”. Last year when the space station suffered a 6 month interruption due to one of its systems failing after an important part  broke,  the crew could not get the system operational because they had to wait for a cargo shipment with enough available space to send the replacement part. 3d printing would have not only solved the issue in less than 6 months but for future repairs and replacements it’s always easier to ship a spool of filament rather than finished products.

An interesting fact about the International Space Station printer is that it is controlled remotely from earth, this means that the astronauts hit a button and the piece is printed on the space station.

Made in Space pitch video:

Werkheiser goes on to explain, “For longer-term missions for exploration, this is absolutely critical technology.” Mars immediately comes mind with it’s obvious challenges, such as determining how to bring along enough supplies and equipment to last the 6 month journey to Mars, a  several years long mission and the flight back.

Pre-Fab structures that can be used as shelter are heavy and take up a lot of space, instead of bringing those along it would be better to bring a 3D printer to use local materials to print shelters.
This is the focus  of the Mars 3D printed habitat contest proposed by NASA this year, it ended September 27th, and there were 165 submissions, the grand prize of $25,000 went to Team Space Exploration Architecture and Clouds Architecture Office of New York for their design, Mars Ice House. 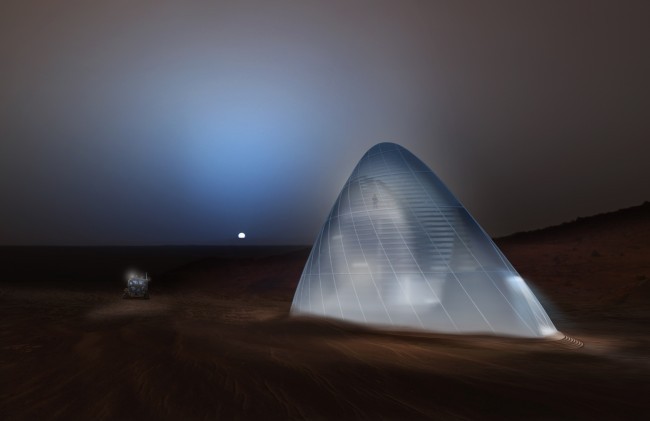 3D printed parts on board

While there are several niche markets all with their own ideas regarding how  3D printing can change their businesses but what most people want to know is: “when will 3D printing be used in commercial aircrafts”?

We have two very good examples from GE:

First, the housing for the T25 temperature and pressure sensor on the GE90 engine. The previously designed part was covered by ice which shed into the compressor, damaging it. GE redesigned the housing but the resulting complex form could only be produced through 3D printing. As GE has a long experience in 3D printing with 2 factories and a 3.5 billion $ investment over 5 years, it directly went to production and is currently being retrofitted on 400 Boeing 777. 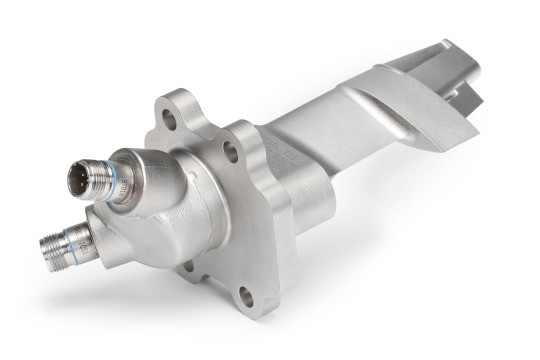 But GE went even further in a collaboration with Snecma under CFM International, the well known manufacturer of the most sold jet engine ever: the CFM56  with almost 20,000 units sold. CFM is currently going through the certification of its new generation engine: the Leap. It will fly on A320 Neos, 737 Max and Comac C919s in 2017 with a 15% emissions cut from the previous version.

The engine is packed with innovations and one of them is 3D printed fuel nozzles. These parts are injecting a mix of air and kerosene into the combustion chamber: the core of the engine with a 1700°C (3000°F) temperature (to understand how an engine works, have a look at this video). No need to say that this is a very critical part. Each engine has 19 nozzles which means that CFM is going to produce 45,000 3D printed nozzles a year! 3D printing is definitely moving from the Rapid Prototyping denomination to Additive Manufacturing. 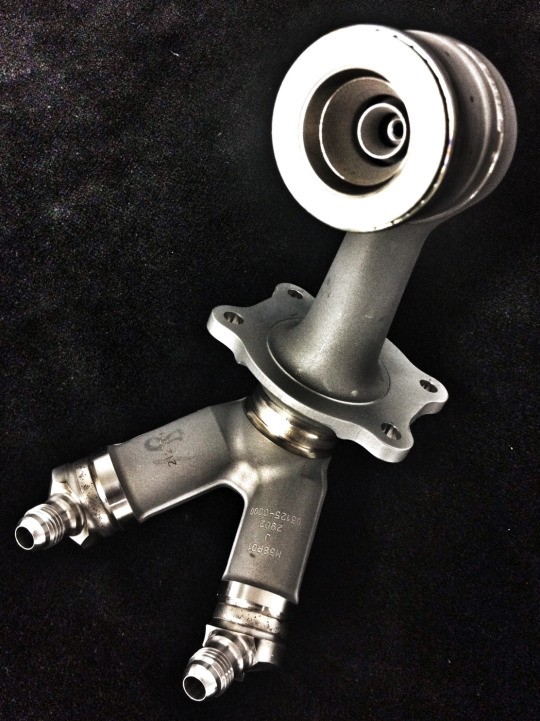 The reason why CFM engineers moved to AM is that it allowed for a design that drastically improved the durability of the part by preventing fuel nozzle coking (accumulation of carbon deposit on the nozzles). The newly designed nozzle that was once made of 18 parts is now printed at once which also makes it 5 times stronger and 25% lighter.

The only remaining grey area is cost reduction. According to Greg Morris, business development manager of additive tech at GE Aviation, the story is “still being written,” and the complexity of 3D printing cost evaluation won’t be fully understood by the company until the early part of the next decade.

All in all, there are still some obstacles that need to be alleviated to fully revolutionize the industry.

First, DMLS/DMLM printed parts are small. The largest print bed available was created by Concept Laser’s X line 2000R and is only 800mm x 400mm x 500mm. That is why other technologies are currently under investigation like Wire and Arc Additive Manufacture (WAAM) which lead to a test print of a 1.2m long part for BAE Systems at Cranfield University. 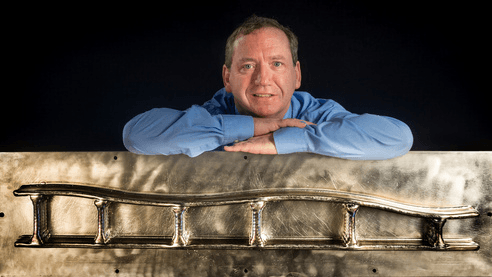 Second, certification is problematic. Every single part of a commercial plane has to go  through a complete certification process that includes a lot of stress, durability and fatigue testing. This process takes time and in order to take advantage of 3D printing, the whole process should be certified, not just a few parts. This would allow a switch in the production process for existing parts from traditional manufacturing to additive manufacturing. Industry big players are working on these certifications right now. It also requires a great replication accuracy since critical parts must be precise with a 10 microns resolution which is a struggle for current 3D printers.

Lastly, there is still some work to do on materials R&D. Powders are both 100 times more expensive than the same material in another form and too limited in terms of composition. For instance, a Nickel-Cobalt alloy is widely used for jet engines for their high temperature resistance and there is no available powder of this composition. 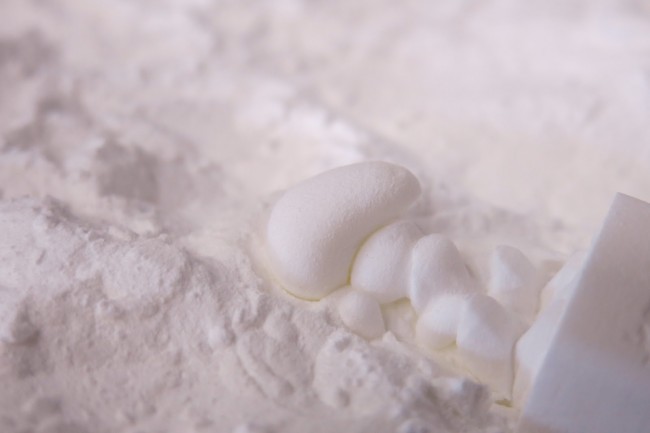 But it makes no doubt that the sector is investing a lot in this new technology that is already revolutionizing the aeronautics and aerospace industry.

While this article has been mainly focused on metal printing made in house by big companies, it makes no doubt that 3D printing is also widely used for prototyping iteration processes and small batches production in Nylon. Have a look at our aeronautics and aerospace page to see what can be done with plastic prototyping in A&A using Sculpteo’s service!