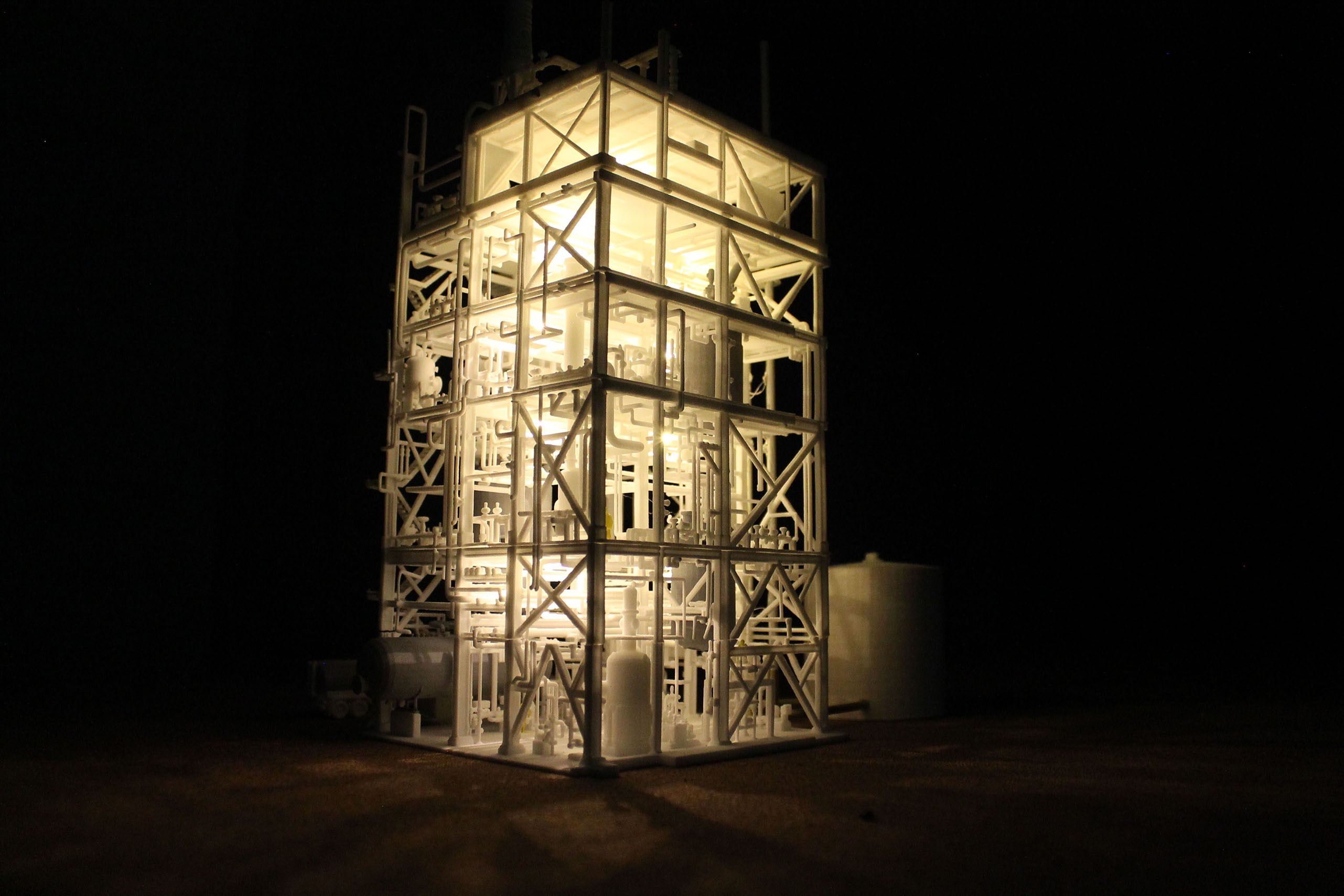 Sometimes a little competition between friends is a good thing! When 3D designer Maarten de Lange, was challenged by a friend to create a complete replica of a petrol chemical factory to scale he created an amazing model which you can view in the image below. With the help of Sculpteo’s online tools he was able to model and print his design and show his friend what 3D printing can really do. Discover his process to create this amazing model! 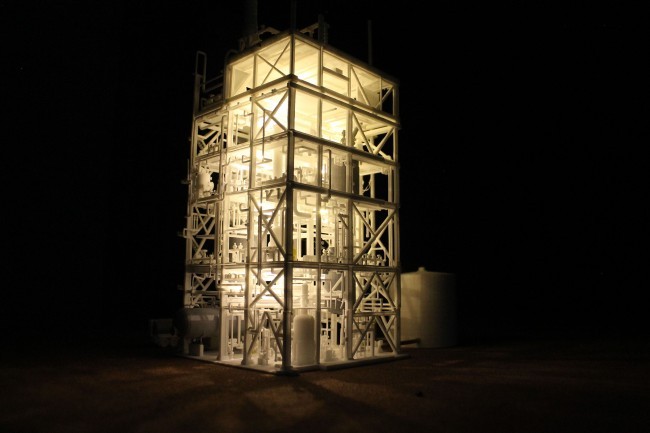 Isn’t the model pictured above amazing? What makes it so great is that the factory is made of 7 large parts, it took around 35 hours to complete. A lot of those hours were spend determining how to incorporate lighting into the model and at what needed to be removed in order to fit the lighting hardware in.

Maarten explains us how the idea of his project started…

“During this year I bought a FDM printer for personal exploration of building objects. A friend of mine gave me challenge to build a scale presentation model of a petro chemical factory. I was very interested in the makability of the digital model and the time it would take me to do it.” 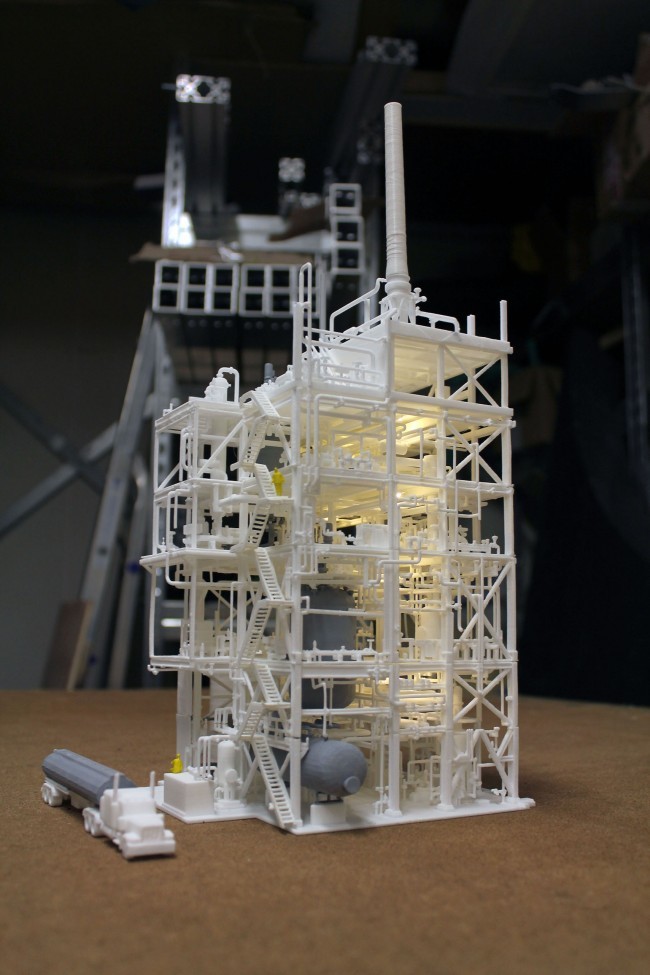 “The digital model I received was very, very complex with much more piping and details then you can see in the pictures. For a clear presentation of the factory the amount of detail needed to be lowered. First I communicated two concepts: A scale model build very cheap with my FDM printer or build a more detailed but costly model with laser sintering. The high details and lack of support made sintering the best choice. This allowed me to keep many of the small details which gave the model the right appearance.”

But quickly he had to compromise with the technology constraints.

“I had a limited budget to build the model. First the model was twice in size. The volume really adds to the price and I had to reduce all the parts. I ordered a sample to make sure the details were visible and to test painting and lighting. The model was small and difficult to paint. I decided to seperate the important parts from the building and paint them by hand. The woolly nylon material did suck up a lot of details in side of the factory. Therefore I used LED lights to introduce shadows which gave more contrast in the depth.”

To create his 3D file he used Meshmixer and other software to facilitate the 3D file conversions. But his first try didn’t pass the production test. It means that the 3D file needed to be improved in order to be correctly printed. 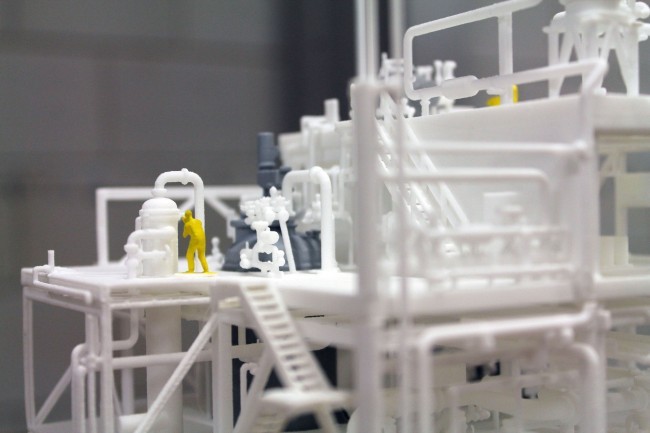 “I used a mix of software for file conversions but for editing I used Meshmixer. This software has the solification option, in which i could prepare each part for the SLS printing technique. The final parts did not pass the production test though. There were too many small particles which would clog up the production process. No time was left to rebuild and as last resort I used the thickening tool from Sculpteos toolbox.”

So he used our tools to optimize is 3D model.

“I was expecting to see bad thickened spots but was surprised at the subtility of the tool. The enhancements were visible but not obnoxious to the eye. To reduce the costs further, the vessels inside the factory were hollowed out with the sculpteo tools.”

Then, Maarten give us some precious feedback on his experience!

“I underestimated the amount of data generated with the model. Every part was “solidified”, cleaned, checked and reduced to a million voxels. I had to use 2 extra workstations to maintain the workflow. To obtain a price of each part I used the high quality models. The scale had to be reduced a number of times to meet the quotum. The next time I am going to use low quality samples. Just like playing in an old computer game: Piping and tubing of triangular shape.”