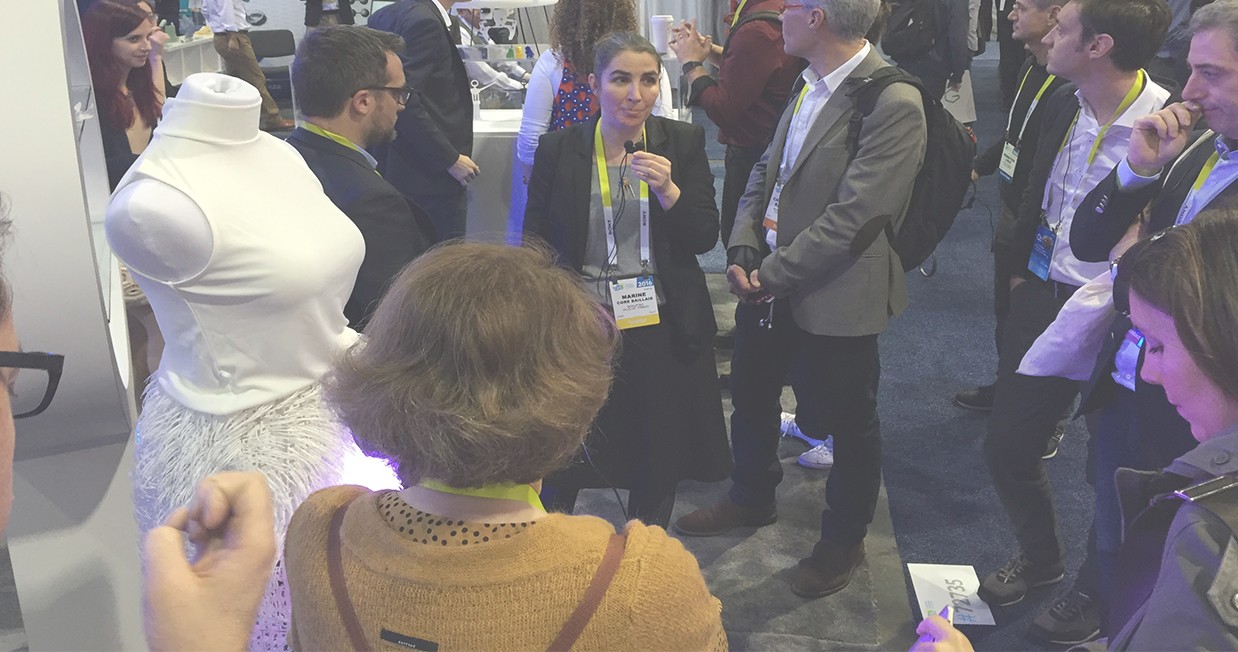 Sculpteo is lighting the way with 3D Printed Fashion

For CES 2016, this year we pulled out all the stops and what happened next was amazing. Crowds formed around our 3D Printed fur inspired skirt and we’ll show you why! Properly positioned right at the front of the Sculpteo booth the plastic faux-fur skirt is back-lit with LED lights that change colors which caught the attention of those who passed by.

Not only did we answer these questions but we also turned it into a functional item because it can be worn on the human body. I’m talking about our 3D printed faux-fur skirt, and if you were at CES 2016 in the Sands 3D Printing section, chances are you have a picture of this item. Well, let’s dig in and figure out how our designer and printers made this project come to life. 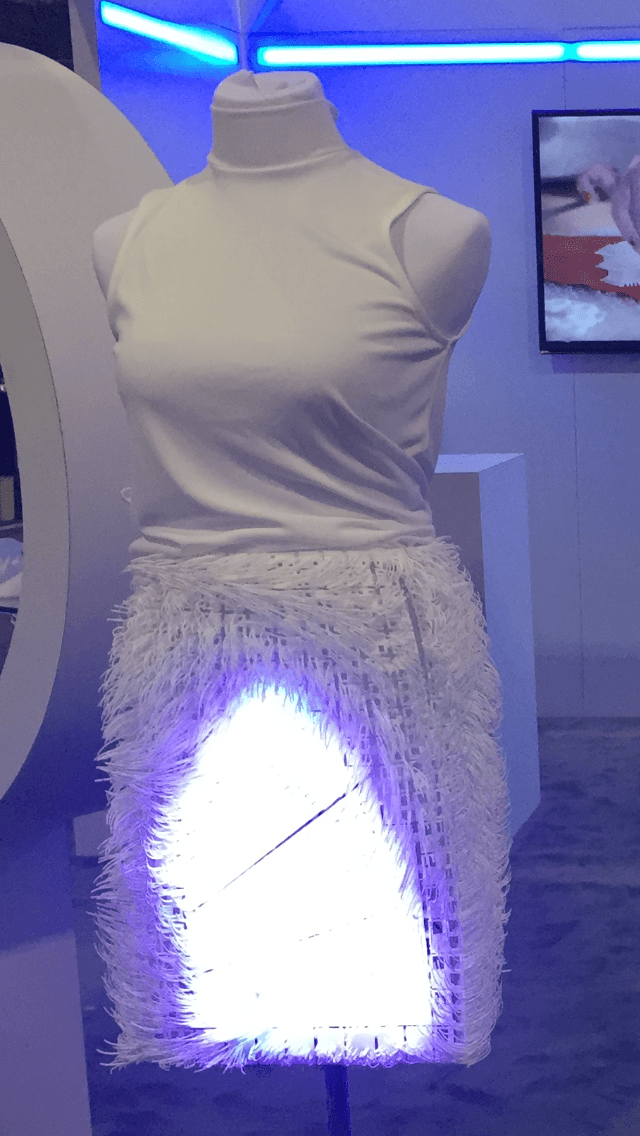 Our designer Alvise Rizzo was kind enough to allow me to interview him, and this is what I learned about the process of creating the skirt pictured above.

For the faux-fur skirt above you can see that this project was mostly created using 3D modeling software that allowed for organic modeling. You will also notice that there are some engineering elements incorporated so that an LED circuit board could be attached to the inside of the skirt. Alvise talked to me about what kind of modeling needed to be done in detail and provided me with examples of free and paid software options that can be used to get the same effect. The list included Blender, Maya, Rhino, etc… these types of software could be used to imitate the individual hairs on the skirt. The fur pattern varied in length, pattern, and direction which helped keep the print light weight, and in the end it created the illusion that the fur had movement. 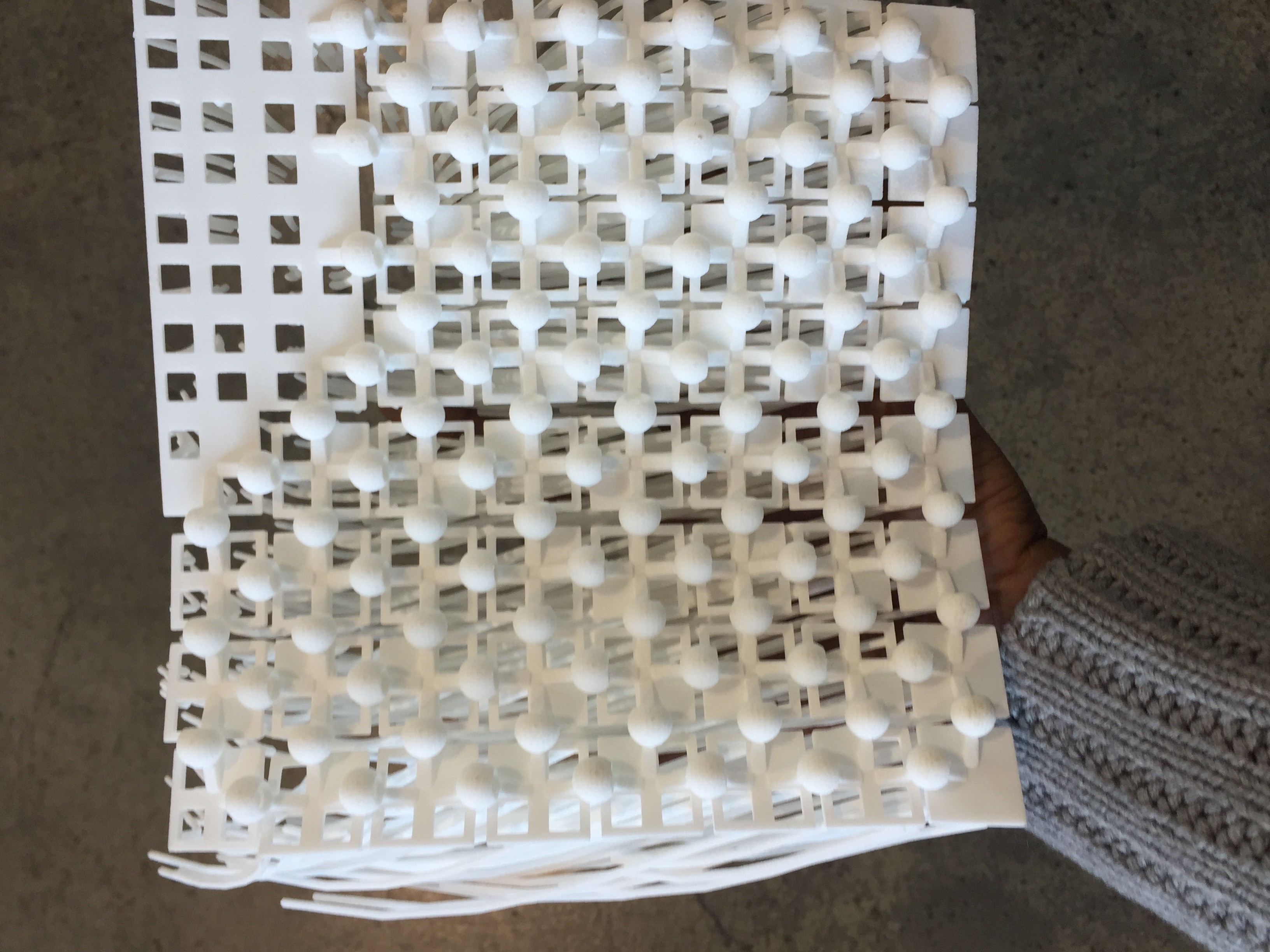 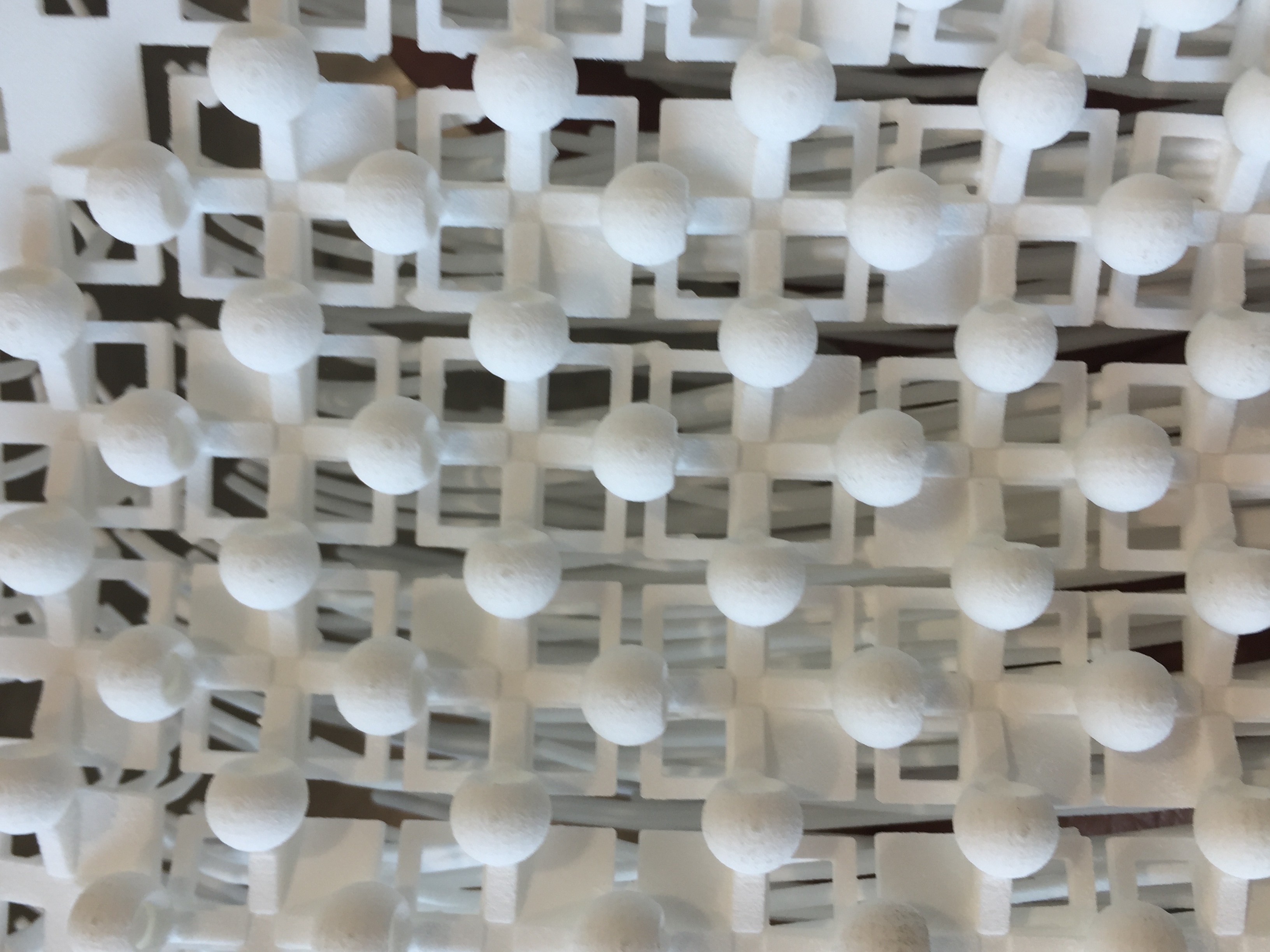 The structure of the fur skirt was created using engineering software which Alvise also described, and they included software such as Solidworks, and AutoCAD. This was a very difficult part of the design and Alvise let me know that it was because the back needed to function as a way to connect each of the 5 sections that would be assembled to create the skirt, and it also had to house the LED board.

Alvise decided to create the back of the design with a very unique pattern that would allow for movement and flexibility. And as for the LED board, a section of the skirt didn’t need to be flexible because we would be inserting the rigid LED board and battery pack, so this skirt required many different software and design techniques to complete. I knew that Alvise was a 3D Modeler and CAD designer, he shows off his skills in Sculpteo’s “Ask a 3D Designer” webinars that we have hosted together, but in my conversations with him regarding this project I learned that Alvise used to prototype ski boots using 3D modeling and printing technology. Because he had this experience with the technology finding creative ways to make plastic flexible and organic on the human form wasn’t a struggle for Alvise at all. The struggle, according to Alvise, was getting the model to pass the solidity check on our site. Each hair was modeled below our thickness guidelines, and this caused the model to be rejected through our system, what we needed to do was use the “Print it Anyway” option available you can use this same process; we’ve created a detailed article on how you can print your items anyway and what that means for you. 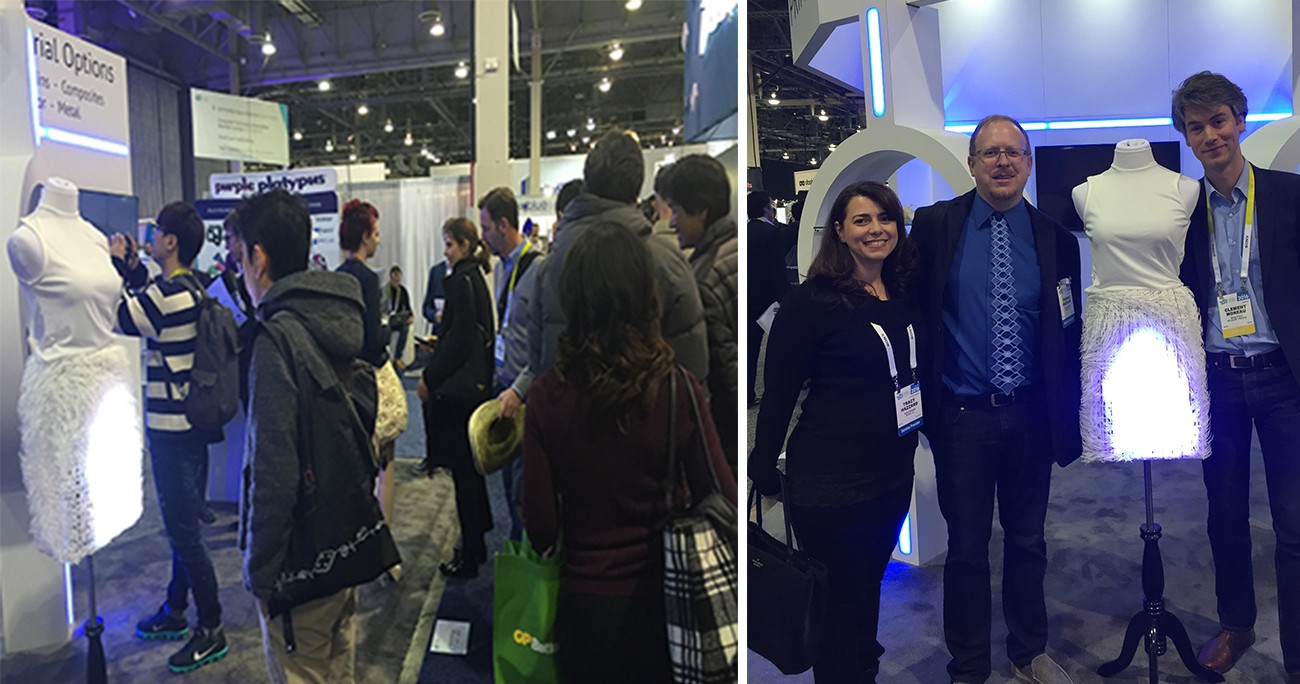 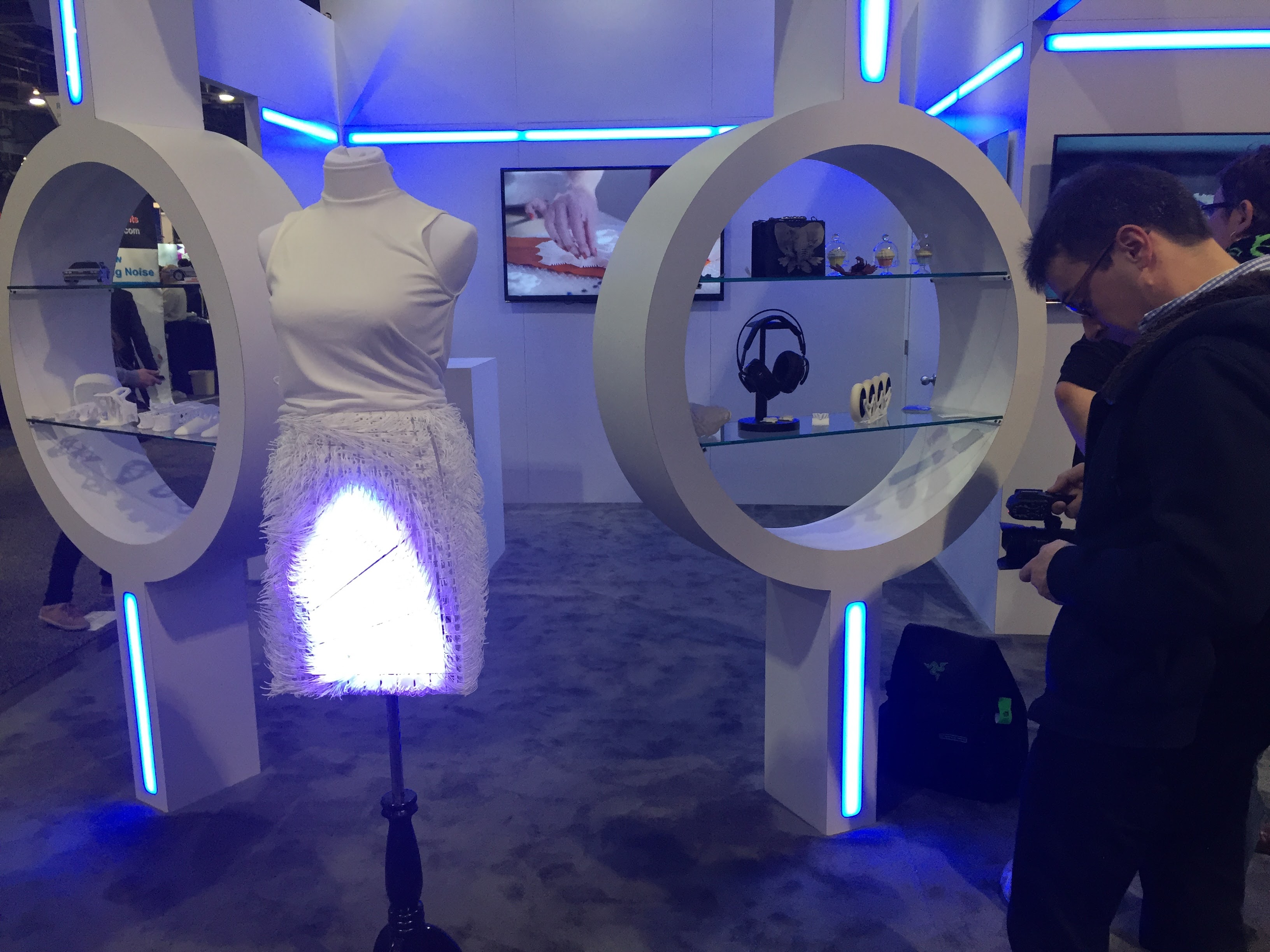 The results achieved from Alvise’s modeling expertise and his knowledge about the print it anyway process resulted in the innovative and showstopping skirt that you see above. We received many comments from CES and also Social Media shares that we’re happy to share with you today:

Now that you know all about how to make a flexible 3D printed plastic skirt look soft and have movement, let’s take a look inside Sculpteo’s Europe Factory

If you stopped by the Sculpteo booth at CES  2016 you probably saw that this video was running however with all the items on display chances are that you missed pieces of the video. So we are going to just leave the video here so that you can watch it and learn about the process and what our Europe factory and 3D Printers look like. Enjoy