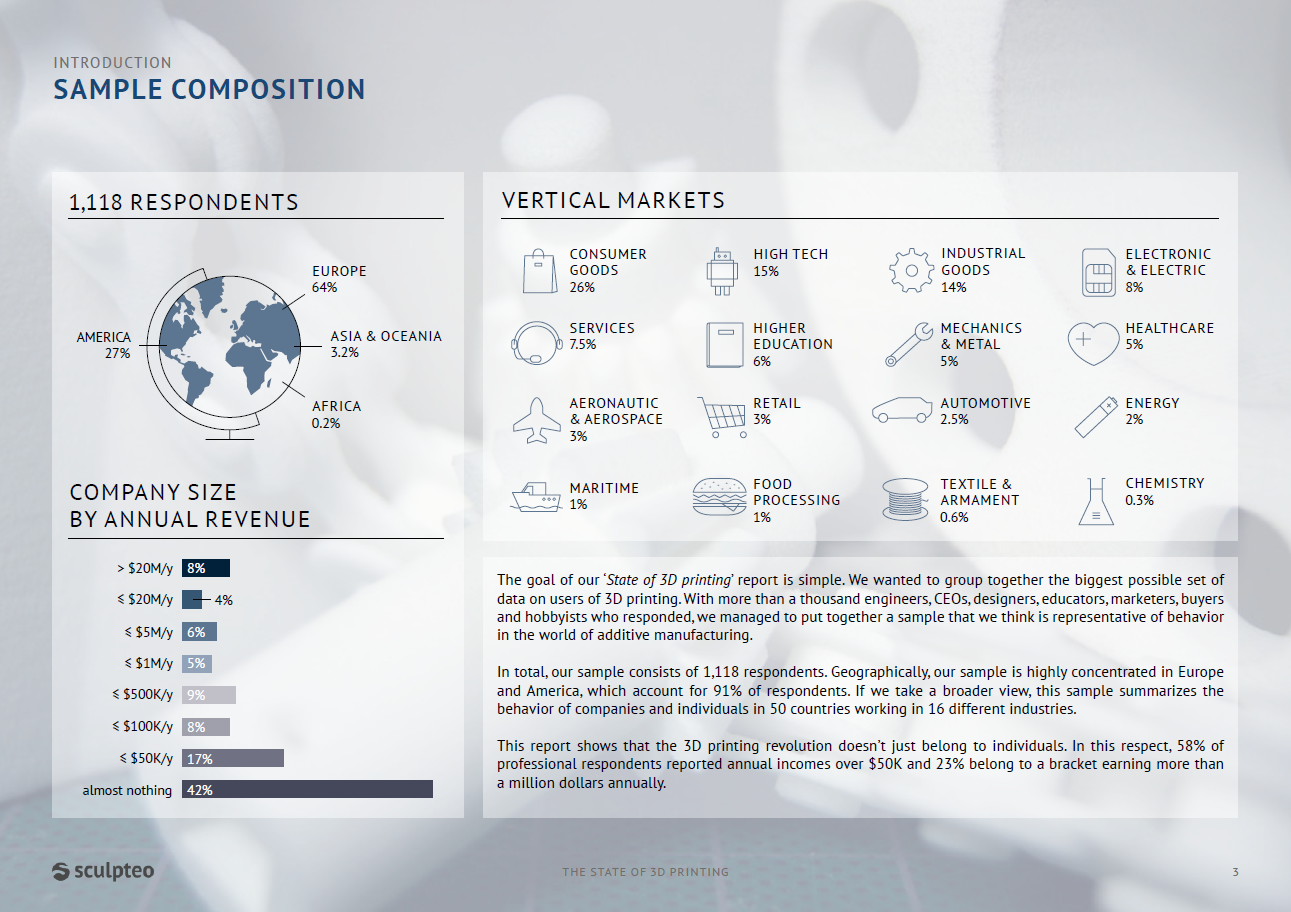 As we have stated in our first blog post concerning our second edition of the State of 3d Printing, our survey reached around 1,000 engineers and design professionals at virtually all levels, across all industries, and around the world. Out of this thousands of respondents, around 300 respondents have stated that they were hobbyists. As we wanted to know a little bit more about them, we thought about dedicating a whole blog post just for hobbyists, about what they do, how much they’ve spent, what they believe 3D printing should represent, and many other questions.

Half of our sample comes from Europe (55%), the other half from America (40%). If we were to look into details, the majority of hobbyists come from the United States, with 36% of respondents, and from France, with also 36% of respondents. Following those two countries, we found other countries with a number of samples much lower than both the US and France.

As for sectors, a great deal of hobbyists primarily work in Consumer Goods (17%) and High Tech (13%), sectors where 3D printing seem to be growing as it is becoming a decision-making support tool. In addition to those two sectors, Services (8%) and Industrial Goods (8%) show a lot of support. A lot more information concerning 3D printing in all sectors is available on Sculpteo’s application pages.

A majority of them consider to be beginners (46%) in the matter, 3D printing seemed to have piqued their interest. Conversely, a great extent of them do believe that they are intermediates (42%) and some even experts (13%). All in all, hobbyists come in different shapes and sizes, for some, 3D printing is a passion, for others, it is just a strong interest.

Even if all do not master yet the tools and technics of e-manufacturing, most of them have used 3D printing in 2015, 80% to be precise. Besides, 3D printing doesn’t require any particular skills, a lot of 3D models are already available online, as well as tutorials, all one has to do is find either a 3D printer or a service that could print for them such as Sculpteo.

On average, a hobbyist spends around 1,342 dollars. This is not a surprise. Most, however, spend around 1 to 1000 dollars, around 87% of respondents. Just a few of them spend above those amounts.

As for changes in their spending habits compared to last year, a majority increased their expenses, 57% in total, and from this majority, a high number increased it to above 101% (32%). As for the others, most didn’t change anything (34%) while others decided to lower their costs (8%).

Hobbyists, of course, use 3D printing in majority for their hobby. While this seems obvious, this number is restricted to 54%, meaning that the remaining 46% of them do not use it as a craft in one’s leisure time for pleasure. The other big purpose for hobbyist is prototyping, at 43%. Two more purposes stand out, art (27%) and proof of concept (22%).

Furthermore, 3D printing is primarily of single-usage amongst the respondents (59%) and as we gradually increase the number of uses, the percentage of respondents decreases. Following this, we might assume that perhaps hobbyists do not exclusively use 3D printing as a hobby but as a complement to a hobby or as part of a hobby. 3D printing can, for example, be used in drones, in clothing, as a prototype to a bigger personal project, or perhaps just part of the maker movement. As we know, the maker movement continues to gain ground with ‘makerspaces’ popping up all over the place. Whether it is a Fab lab, or a hackerspace, these places of innovation allow their members to create almost anything using tools for digital fabrication. Want to find one near you? Why not read our blog post on finding a makerspace close to you with the Makermap.

Most hobbyists, in a multiple choice question, have said to prefer plastic over all the other materials (79%). Plastic stays king as it is a versatile and strong element. Following plastic, we can see materials such as resin (17%) and metal (20%).

As for the kind of 3D printing technology hobbyists mainly use, Selective Laser Sintering (SLS) is the prefered one with a percentage of 44% amongst the sample. The choice is quite understandable as SLS is fast, accurate, and functional parts are not as brittle as most SLA models. Fused Deposition Modeling (FDM) is right behind it (29%), perhaps composing all consumer 3D printers. More information is available about technology and material on our online glossary.

What about services you might ask? Well, most hobbyists prefer to use one additive manufacturing service, one that they can trust to do the job, a least 47% agree on that. Otherwise, 34% of respondents try to use at least 2 to 4 different services, 1% try to use more, the rest of them (18%) do everything in-house.

The choice of using a service depends on several factors, however the majority do agree to look at price first and quality of prints second, then materials, turnaround time, free analysis and finally others. Out of all the services available, a majority seemed to have found one on par with a good price-to-quality ratio.

This week, we looked at the what, the how, the who’s and the what’s of 3D printing for hobbyists. In the next post, we will share with you more information on the State of 3D Printing. In the meantime, why not entertain yourself with stories about hobbyists who have used 3D printing for their passion: either in board games or in robotics.