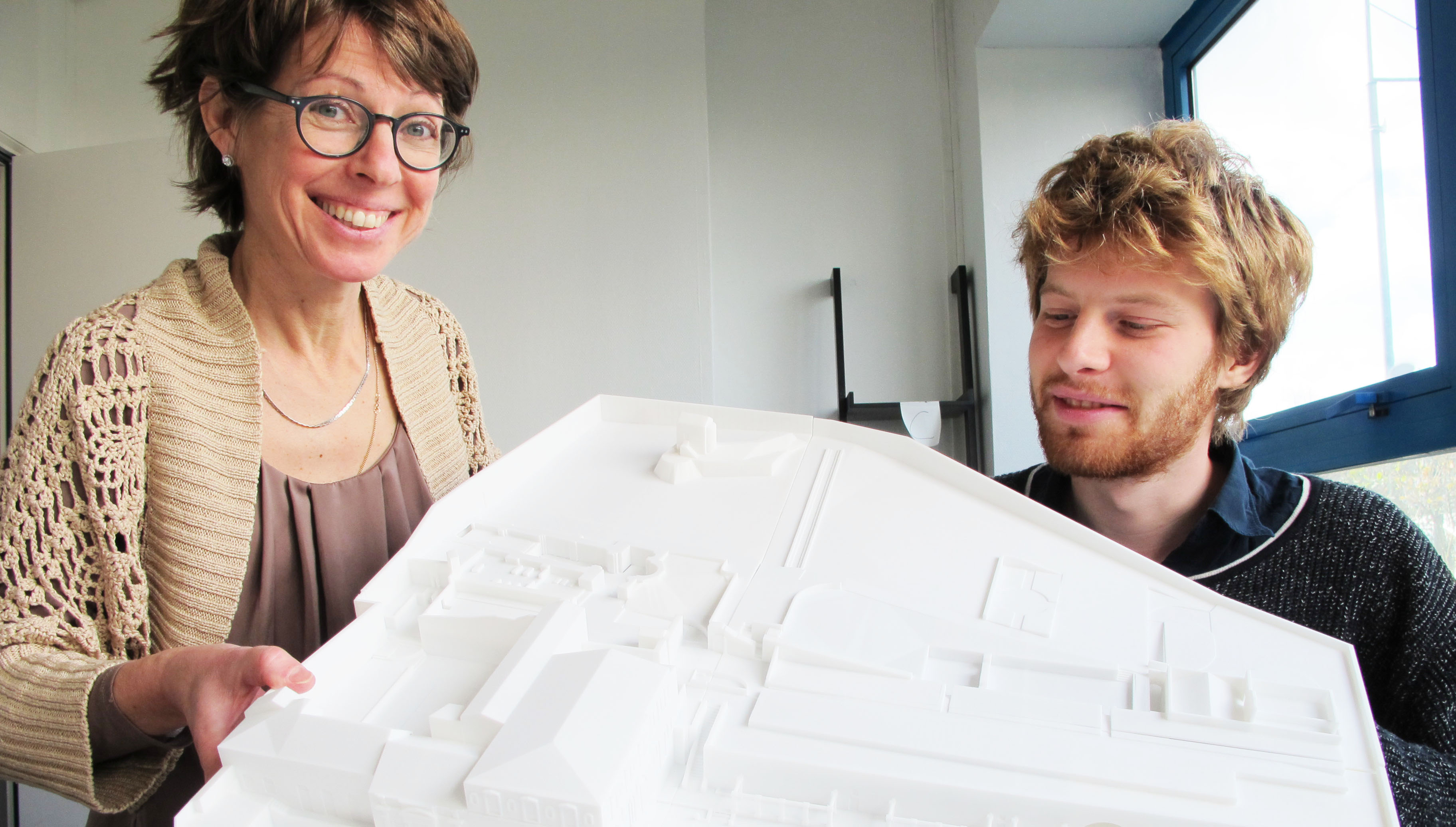 The Saint-André abbaye, located in the South of France, is an important historical monument. From a simple hermitage in the 6th century, this site was turned into an influential abbaye in the 13th and 14th centuries. It was destroyed during the French Revolution, then used as a hospital and an orphanage, and started to be renovated in 1916 before being opened to the public.

Exactly one century later, the Abbaye is still evolving with its time, since it is now equipped with the best of the best, when it comes to accessibility tools for the visually impaired: a 3D printed model of the whole site building and gardens! This is an achievement in terms of cultural mediation as well as in technical terms, since the conception and 3D printing of the model took great ingenuity.

Where does this 3D printed abbaye model idea come from? Which obstacles araised between its conception and its realization? How were they overcome? What were the relations between the project initiators and the Sculpteo team?

An interview with the project coordinator, Manon Sarthou, town-planning and architectural heritage expert, in charge of the accessibility projects for the association l’Illiade du Patrimoine.

Sculpteo: How did the idea for the 3D printed model come to you?

Manon Sarthou: The model is a mediation tool. Visually impaired people often have maps of historical monuments made with thermoforming which, even though they’re great tools, aren’t very detailed, and only give a vague idea of the space. What we wanted was an object that would allow people to really experience and feel the abbaye and its gardens, because they’re truly beautiful. I contacted model makers, but what they offered was too dull, and too expensive: the usual models for the visually impaired are rough, imprecise. I wanted better.

A friend who works in an architect’s office told me about 3D printing, and the online 3D printing service offered by Sculpteo. This seemed to be the solution for a much more detailed and less expensive model. I went to Mont Saint Michel to see the model that Sculpteo had done of that site, as well as its copy in the Sculpteo office. I found it very beautiful, and this finished convincing me.

S: How was the model’s 3D design realized?

MS: The Mont Saint Michel Model was a sectional plan, in which you could see the different floors of the building. That’s not what I wanted: I wanted the whole building, with details of the façade and the gardens. We already had the architectural plans, but not the measurements of the gardens. We had to measure manually, take pictures, make films while walking through the alleys and commenting the elevation levels. We even bought a drone to take overhead pictures!

There was a deep reflexion on how to combine the respect of the real proportions and the handling by visually-impaired people: for example, if we had respected the actual dimensions of the alleys, they would have been too narrow for a finger, so we decided to broaden them a little bit so that it would be possible to “stroll through them by hand”.

We found an architect, Alexis Didier Lambert, who had just graduated school in Belgium. He handled the 3D design. He used all the measurements we had gathered, and completed them by coming on the site. He wasn’t very familiar with Sketchup, but he got it quickly, with the help of Sculpteo’s commercial service, especially Romain Renault. Alexis sent the Sketchup design to Romain regularly. Romain gave remarks, and the design progressed through these back-and-forths. Sculpteo found an expert to perfect the design and correct some elements, especially when it came to the respect of minimum sizes: some elements were too narrow for 3D printing.

2) The steps and challenges of the model’s 3D printing

S: How did you choose the material for 3D printing and which restrictions went with it?

MS: We chose white polyamide (PA), following Romain’s advice. It was the most simple and least expensive option, on top of being resistant. For a moment, we hesitated to build the model in colors, but this would have added complexity and cost to the project, without any real advantage.

There was an important reflexion around the amount of details to include in the print: how can we give the largest amount of spatial feeling to visually impaired people, without making a model full of fragile parts? Once again, it was thanks to Sculpteo’s advice that we decided to reduce the amount of small details.

S: Which 3D printing challenges did you encounter? Which solutions did the Sculpteo team offer?

MS: The relations with the commercial team was very rich and fluid. It happens often, especially in France [Manon is from Canada], to deal with unadventurous service providers, who shun away from risks and the unknown. It wasn’t the case at all with Sculpteo: when they were unsure of something, they looked for solutions, always with enthusiasm and creativity. 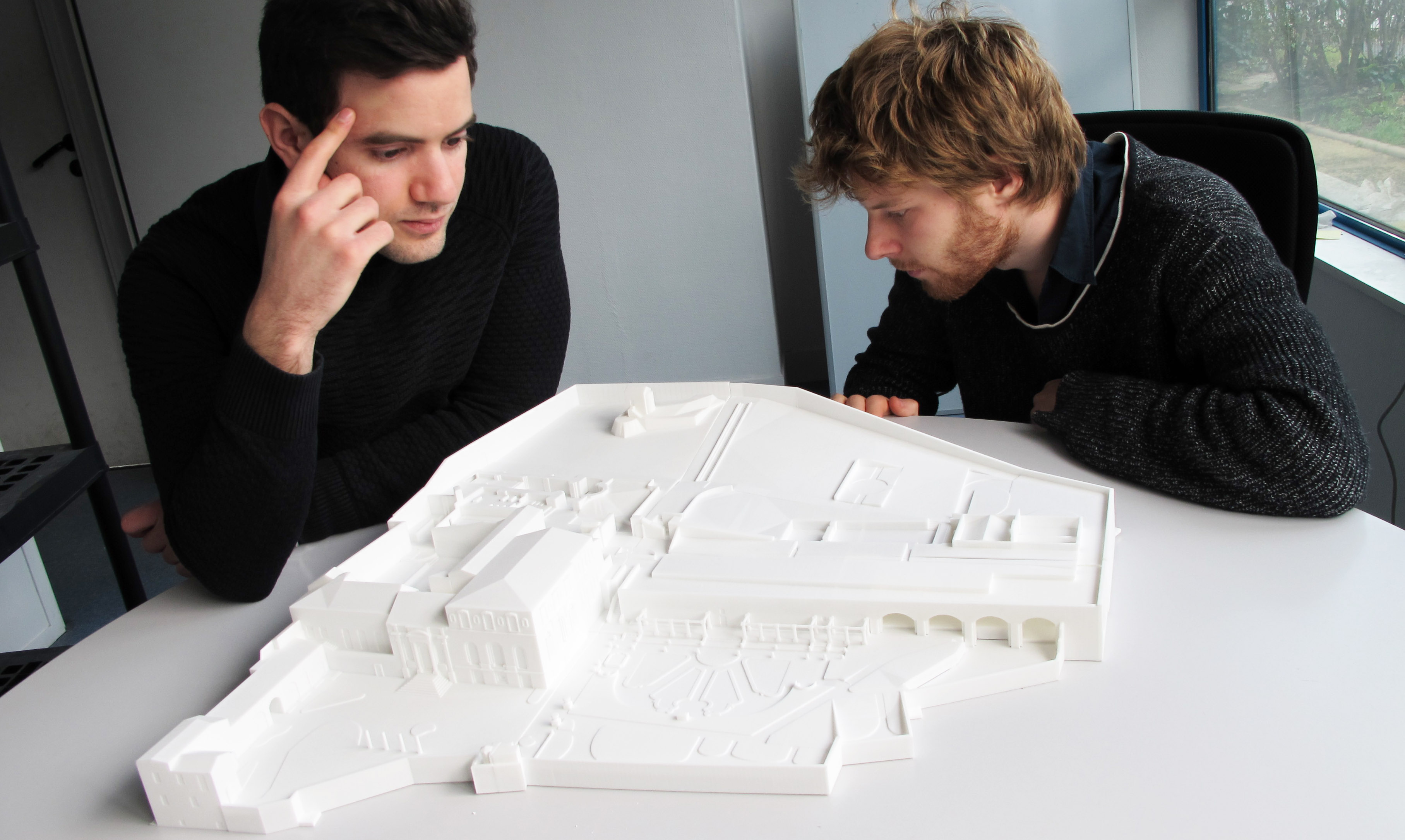 An important question was: should we cut the model in several parts? At first, we wanted it to be one unique piece, but Romain warned us that there was a risk of warping because it was long and flat (it’s an usual 3D printing hazard: when a piece is long and flat, it tends to get distorted during the cooling process). I hesitated for a long time, but in the end I decided to follow his advice and to cut it into 4 parts, with added systems to keep the parts together. This also allowed to strengthen the design.

Romain also made sure the model would be printed during the weekend in order to get a longer cooling time, as an added measure to reduce the risk of warping.

S: How does the model live now that it’s been 3D printed?

MS: The model is a very beautiful object! It presides in one of the main rooms, in a gorgeous area. To prevent staining, we protect it in a plexiglass bubble, that we open when a visually impaired person wants to visit.

We added some words in Braille at key places. 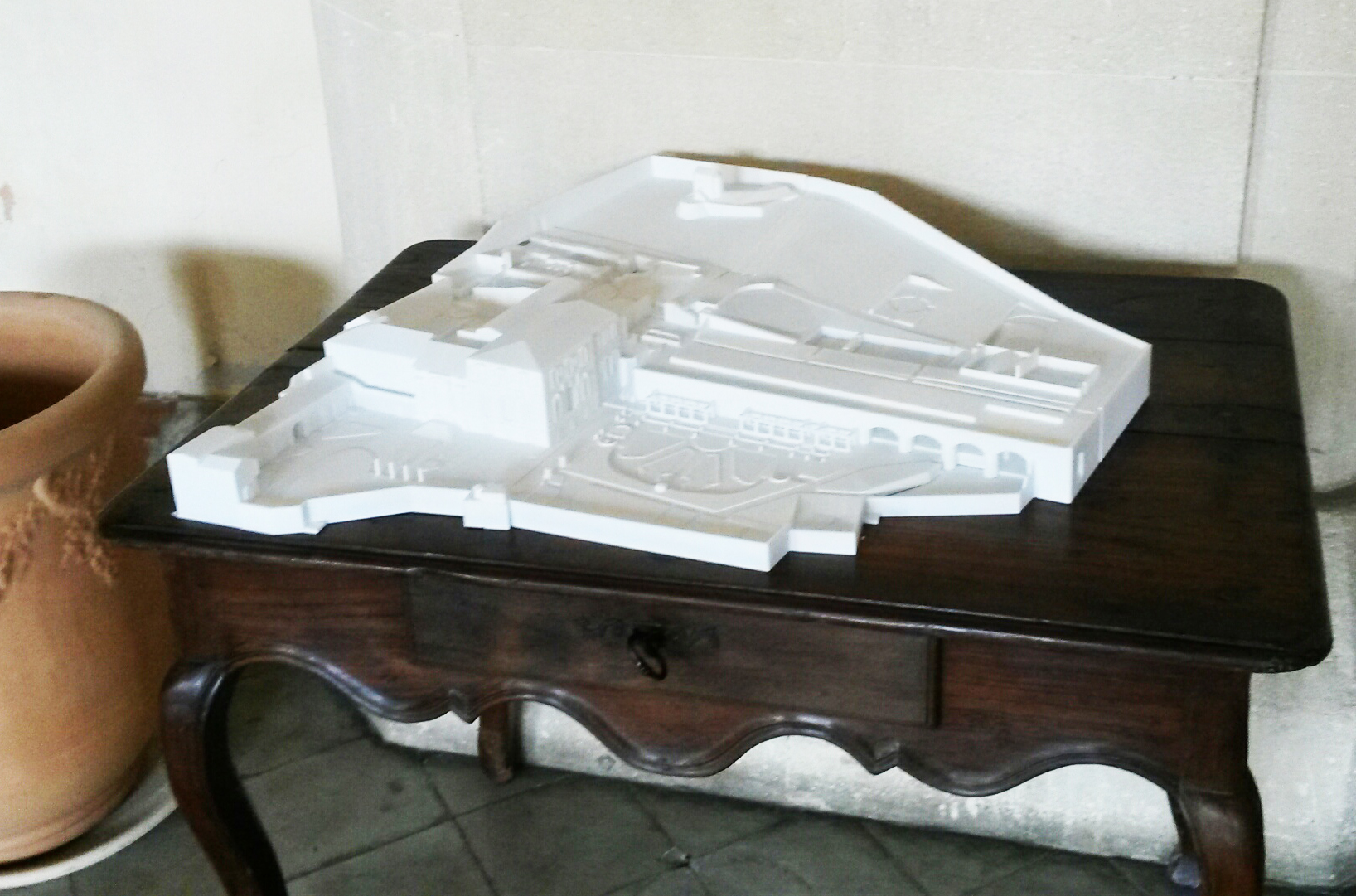 S: Are you satisfied with your choice of 3D printing for this model?

MS: Yes! When I came to Villejuif to pick up the model, it was exactly as we’d imagined it. In the end, we are delighted with every decision taken along the way: choosing the white gives it a sort of flawlessness; it is very detailed (more than a traditional model for the visually impaired), but not too much, which makes it resistant; cutting it in several parts was a good decision too.

Manon and Alexis with the model

S: What about the budget for this project?

MS: In total, the project cost 5,000€, including the design by Alexis, the measurement time, the services by the expert that corrected the STL file, the plexiglass protection, the added Braille words and the 3D print by Sculpteo which represented only 2,400€… When a traditional model would have cost at least 8,000€ on its own, it would have been less beautiful and less close to our standards and expectations.

MS: For now, there hasn’t been many visits during the summer: we haven’t communicated enough about the model and the use of 3D printing yet, except for a few articles here and there. But I’m beginning to be contacted by radio shows and associations: people are interested! The owners and the few visually impaired visitors are very satisfied: it’s a lively object!

The Center for National Monuments, in charge of the neighboring site, the Fort Saint André, might be interested in enlarging the model, to include the Fort in it, since the two sites are actually one, and supposed to be thought of as a unit.

We are looking for financing options to go further. We used to have more helps from the local authorities, and possibilities for sponsorships, but it’s getting difficult (as it is for culture and accessibility everywhere in France). Thankfully the Conseil Régional de Midi Pyrénées keeps supporting us. But we believe in projects like this one, since they are high-quality without being financially disastrous. That’s why we’re looking for crowdfunding, with the group Dartagnans Patrimoine.

The whole Sculpteo team is delighted to have followed this project. It’s not everyday that cultural heritage, accessibility efforts and 3D printing meet, and we’re glad we were there when it happened! It wasn’t our first model, but it was the first one to be so long and flat, and we’re proud to have successfully avoided warping!

We wish the best to Manon and her team for the next step in her project to use cutting edge technologies to make centuries-old buildings accessible to all!