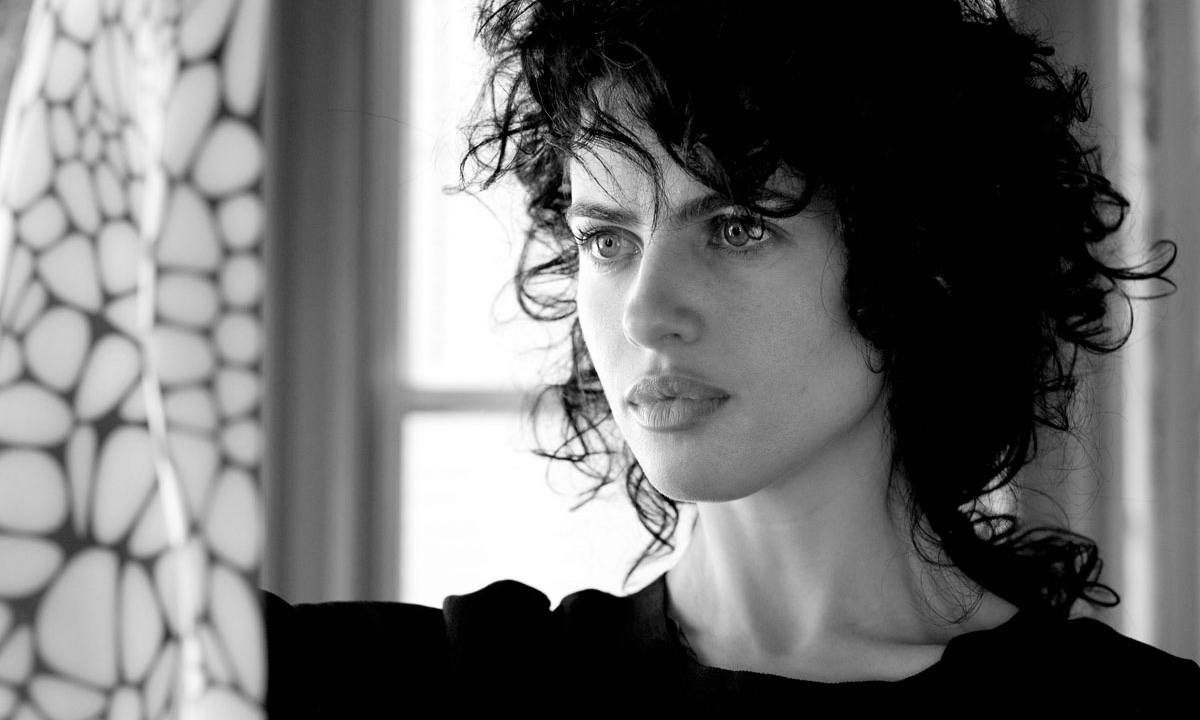 Scientist, designer, architect, artist, sustainability advocate, 3D printing pioneer… the reasons to admire Neri Oxman can’t all be listed in one sentence. Today, we give you a glance at her accomplishments. Because her work is an apology of the possibilities of 3D printing and digital manufacturing… and because we just love Neri Oxman!

For those who don’t know Neri Oxman

Neri Oxman is an Israeli-American architect, designer and scientist. First trained, in Israel, as a doctor and an architect, she received her PhD in Design Computation at MIT, where she coined the term Material Ecology to describe her research area.

She created and directs the Mediated Matter research group in the MIT Media Lab, where she and her team conduct their research on materials science and synthetic biology, computational design, digital fabrication (most importantly 3D printing), and structures and forms. She takes inspiration from Nature, and the medium she is most known for is 3D printing.  Her areas of application include architectural design, product design, fashion design, as well as the design of new technologies for digital fabrication and construction. 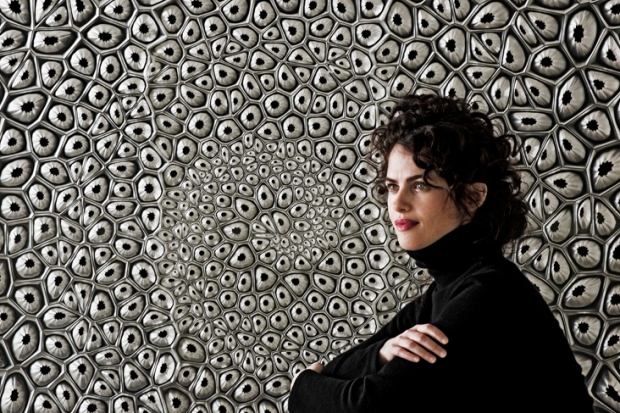 She is considered by many to be one of the leading minds of our time. In 2008 she received 2009 she was named to ICON’s “top most influential designers and architects to shape our future” and to Esquire’s “Best and Brightest”. In 2014, she was part of Carnegie’s Pride of America and in 2015, she was named to ROADS’ 100 Global Minds: the Most Daring Cross-Disciplinary Thinkers in the World. This year, she gave a talk at the World Economic Forum, as a Cultural Leader.

Nature as an inspiration to build stronger, multi-function materials

So, how does an architect create a new area of study (Material Ecology) and founds an MIT lab? Why is her approach one of a kind?

What Neri Oxman does is she observes Nature, and the way Nature organizes matter and designs multifunctional, part-less objects, and she takes inspiration from these observations to try and reproduce what can be reproduced. Her belief is that Nature offers processes to think about form, not forms. These processes allow to adapt to the environment. She intends to create a catalog of natural behaviors and build them into human-made designs.

Thanks to this inspiration, she hopes to create better ways to produce and design.

Questioning what it means to design and produce: moving away from assembly and towards growth

The reason why we talk about Neri Oxman today isn’t just out of pure fandom: it’s because her way of rethinking what it means to design and produce is emblematic of what 3D printing (and digital manufacturing as a whole) is bringing to the equation today, and deserves to be thought of.

In her famous TED talk, Oxman explains that she sees the designer as a person with “a split personality, operating today between the chisel and gene, between machine and organism, between assembly and growth, between Henry Ford and Charles Darwin”. And her goal is to unite these two worldviews, moving past assembly and heading towards growth.

What does this mean? Since the industrial revolution, design and production have been dominated by a culture of parts. To make a functioning object, we assemble parts, each made of  a homogeneous material and serving one specific function. On the contrary, in nature, objects are not assembled, they are grown, and heterogeneous: they vary in characteristics as their function evolves. The example she gives is that of the skin: on our face, the skin serves as a filter, and is thin, with large pores; on our backs, it serves as a barrier, and is thicker, with small pores. Yet the skin is not divided in parts.

Moving from assembly to growth is precisely what 3D printing enables, as an additive manufacturing technique.

With this vision of getting inspiration from Nature and moving away from assembly and towards growth, Neri Oxman and her team are researching ways to (and have already accomplished a lot to) expand the range of possibilities of 3D printing. I’ll give just a few examples:

Neri Oxman observed chitin, the material that composes the shells of crustaceans, which vary in density and strength according to where on the animal’s body it is. She wanted to create a sustainable 3D printing material, and to replicate this multi-function characteristic in 3D printing, so she used ground shrimp shells to produce chitin, and managed to 3D print, with it! This is a bio-degradable, environment-friendly 3D printing material that, if it becomes broadly used, could eventually start to replace plastics. 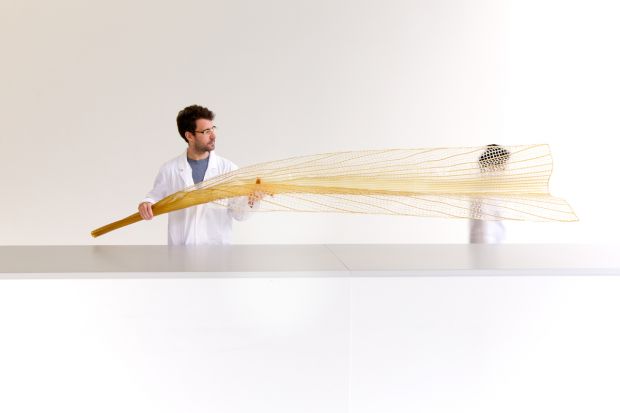 3D printing with cement, with a structure inspired by bone

Taking inspiration from the structure of a bone, that adapts to the load it is enduring, Oxman’s team have coined the concept of functionally graded 3D printing: printing a material with different density and structure according to the pressure it will have to support. This idea is to, in the end, 3D print concrete that adapts to the building its a part of, making it more efficient, and using less material. 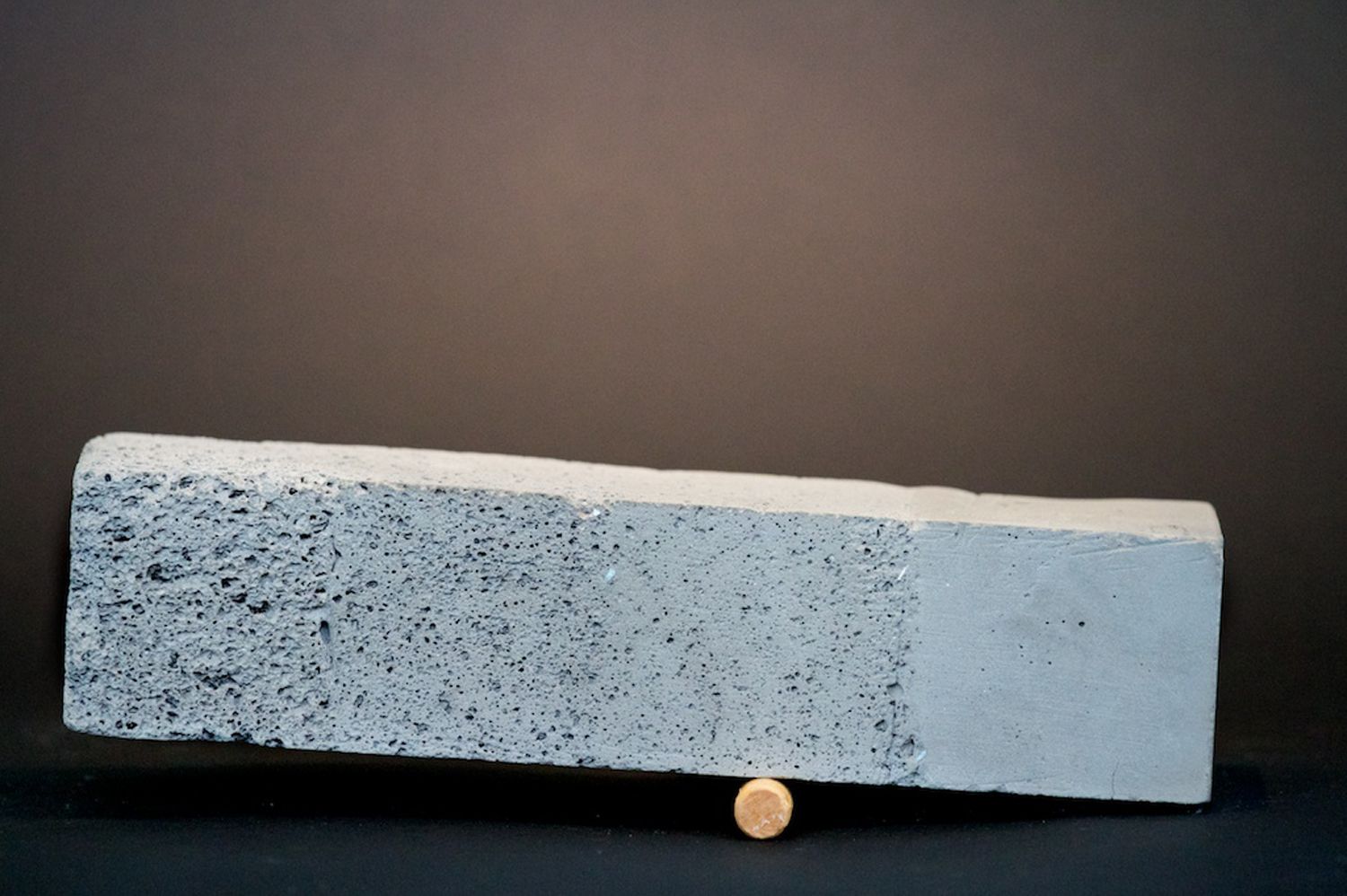 A wide-range Digital Construction Platform that can handle a 1,500 lb lift capacity and a 20 lb manipulation capacity

They are also working on a digital construction platform, that is based on a fully mobile truck vehicle with a working reach diameter of over 80 feet, and can handle a 1,500 lb lift capacity and a 20 lb manipulation capacity. This would allow to additively manufacture buildings with complex shapes, that are adapted to their environment. 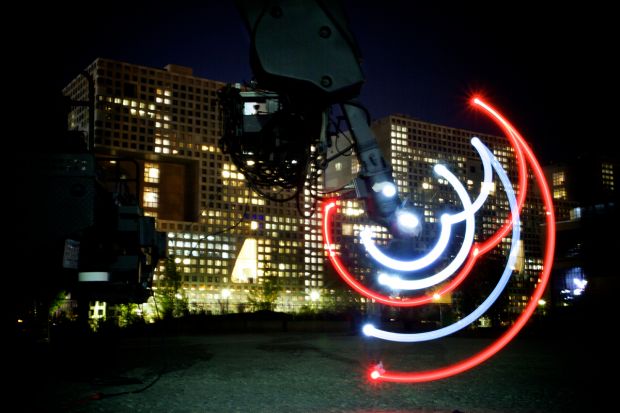 This picture shows the range of the digital construction platform

She describes all these projects World Economic Forum talk (below). Also visit the Media Matter Website for information on all of her research (there’s much more to discover).

Surpassing Nature to protect it: “We need to Mother Nature”

With projects like those I just quoted, and the many other she is working on, Neri Oxman proposes to go further than Nature can, not to make it abide by our rules and serve us, but so that we can serve it. That is how she concludes her TED talk: “We need to Mother Nature”. Indeed, nature can do many things, and it is important to learn from it, but there are things that we can do that She can’t: “we invented the pump and the wheel, and She didn’t” to quote the examples Oxman gives in one of her talks.

Thanks to additive manufacturing, we can use exactly the amount of material we need, and design shapes that are more efficient and resilient. Thanks to material engineering and synthetic biology, we can create more sustainable materials, with characteristics that match applications. We are exactly at the convergence point of great technical advances, that would allow us, if we take advantage of them, to create products and buildings are biologically informed and digitally engineered with and for Nature, not against or in spite of it.

Neri Oxman is one great example of truly taking advantage of this exciting technological time to reconcile production and nature.

An added touch of beauty and lyricism

Taken in the context of Oxman’s research and philosophical and scientific positions, her work is a strong statement on who we are as humans and how we evolve in relation with our environment and our time. And even take out of context, they are beautiful artworks, which doesn’t spoil anything! Oxman’s work is included in permanent collections of many museums, including the Museum of Modern Art in New York, the San Francisco Museum of Modern Art (SFMOMA) and the Centre Georges Pompidou in Paris.

To give just one example, her series Imaginary beings, the mythology of the not yet, composed of 3D printed objects, could be considered as “prototypes of the human bodiy”, and is a beautiful and lyrical reinterpretation of myths. 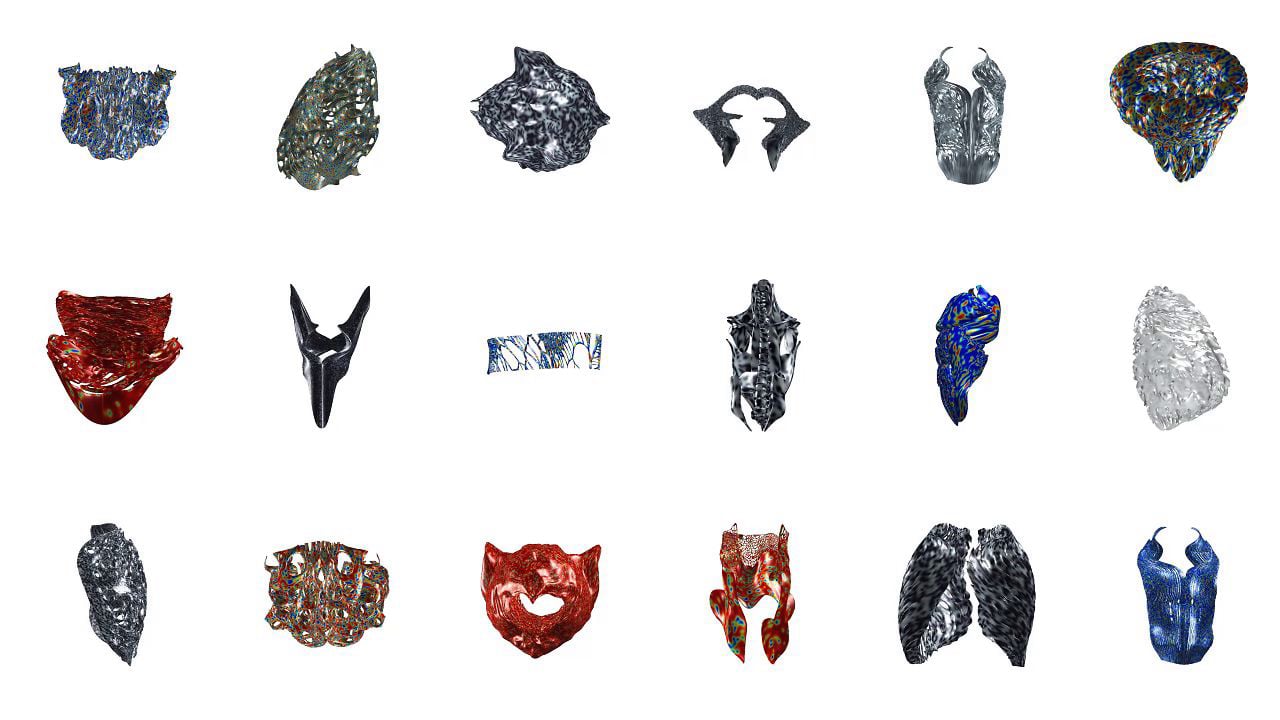 Another example of a moving and beautiful use of 3D printing is the mask she recently created for the Icelandic singer-songwriter Björk.

This was only a quick glance at Neri Oxman and her work! I invite you to learn more about her (you can visit the Mediated Matter Website), and to follow the evolution of her work, as I have no doubt that what she’ll do next will be just as inspiring, touching and visionary.

And if you’ve been inspired, I also invite you to try out creating your own inspiring, touching and visionary object, on our online 3D printing service: just upload a 3D file, and get a free quote.