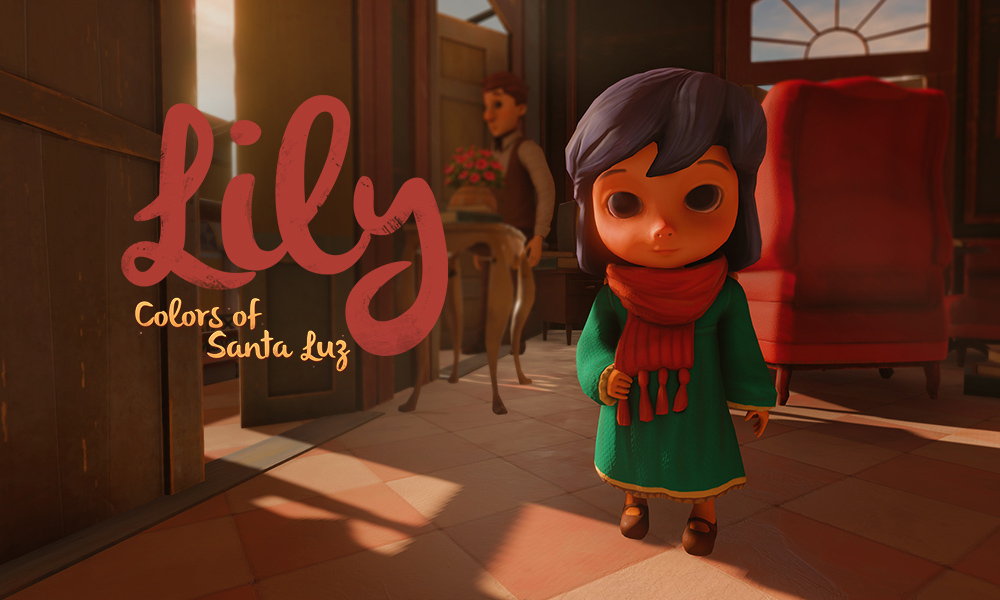 3D Printing and video games: when a digital character can be handled in real life. Today we share with you a customer story full of colors and movement: the story of the promising student video game Lily, colors of Santa Luz. This project charmed us, and its creators used our online 3D printing service to give it some life, thanks to a color 3D printed figurine of their main character, the adorable Lily.

Florian Coudray, one of the game artists for Lily, talked with us about the history behind the game, about how 3D printing fits into it, and about their experience using our services. 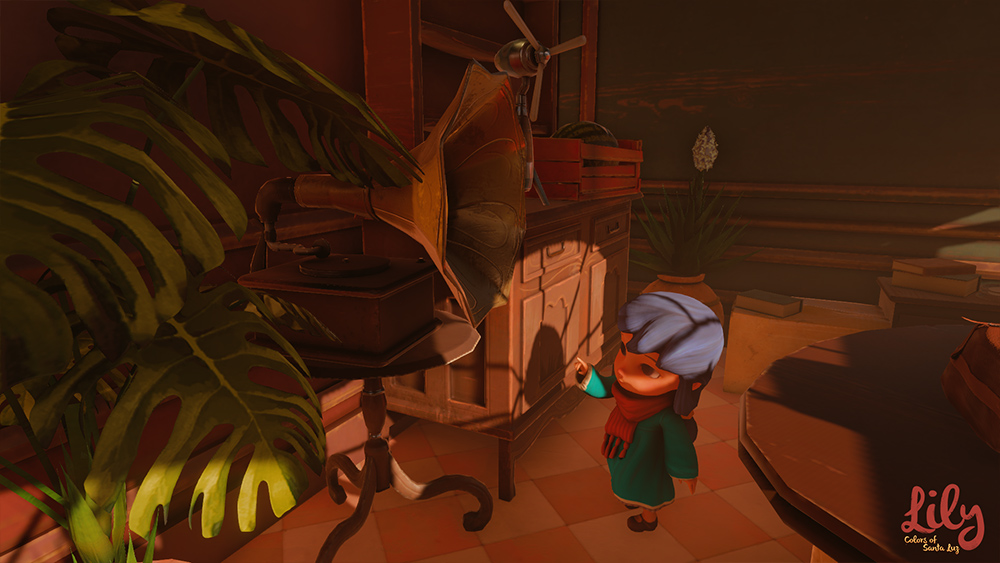 Sculpteo: What story does Lily, colors of Santa Luz tell? Can you describe the universe of the game?

Florian Coudray: In the game, we follow a father and his young daughter Lily, when a war breaks out. Lily, like some other characters, is wanted by a militia. We wanted to draw a parallel with situations of ethnic cleansing like the Shoah, while conserving some mystery on the specific details, to avoid historical and political conflations.

The goal of the game is to escape from town while preserving the little girl’s innocence: make choices that expose her to as few horrors as possible. And if we do impact her negatively, we find marks on it in a diary, and she progressively loses her colors. We decided to use this poetic metaphor of colors representing innocence instead of showing huge amounts of violence like some video games do. 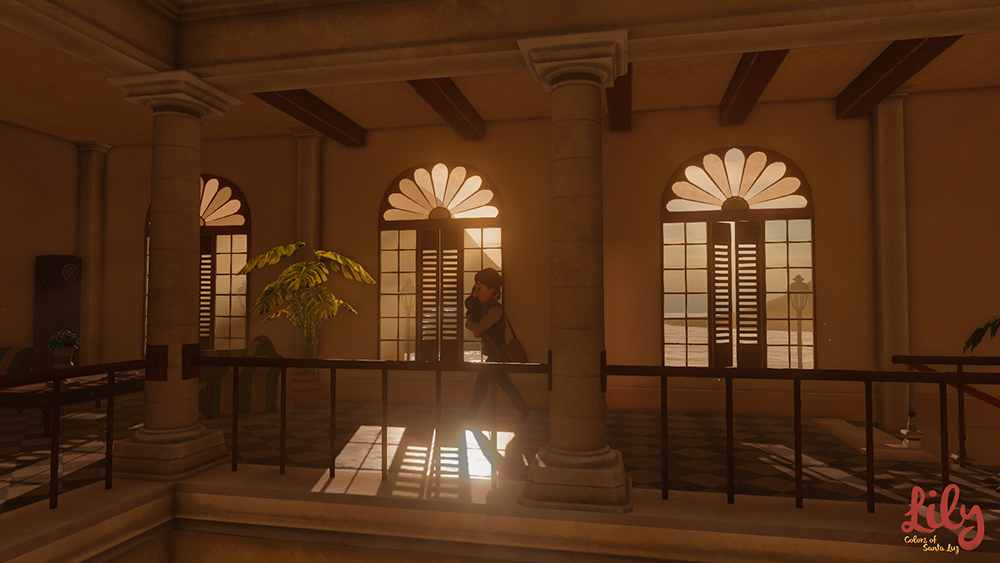 S: That’s very beautiful! Where does the idea come from? What was the origin of the project?

FC: We are 10 in the team, almost all finishing the same video game school, Isart Digital. The initial pitch was created in the context of the last-year student project, by Matthieu Bathellier. Then the team gathered around him, moved by his idea. We worked together, and made his idea ours: in the end, the game belongs to all of us.

S: Why join this project in particular? What moved you?

FC: Matthieu’s pitch moved us because his intention was to denounce the horrors of war, through the eyes of civilians, and while keeping some lightness and poesy.  We got inspiration, for example, from the movie Life Is Beautiful, in which, in a horrible situation, the father’s optimism protects the child’s innocence. One of our central themes was the contrast between situation and presentation. We wanted to avoid the tendency that some video games have to make a war game in which violence is everywhere and the players spend their time shooting people. 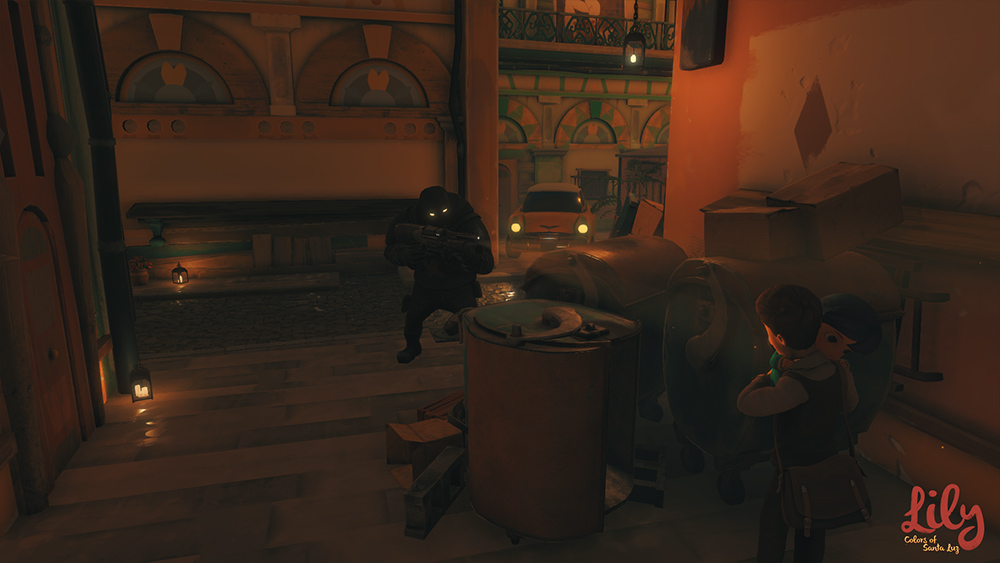 S: Who is the game made for?

FC: Our target public is very broad. Children who are 7-8 years old felt very involved, and on the other side, parents also enjoyed the game very much, as the game play is based on protecting the young girl.

S: Where can we find and try the game?

FC: The game was made available by our school for free. You can find it and play it here.

Part 2: Your experience with 3D design and 3D printing

S: Which software did you use for 3D design?

FC: To design Lily, I used ZBrush and Maya from Autodesk. SketchFab was very useful for us, as it allowed to animate the 3D designs. This way we could show people how the character moved, show it through different angles, etc. It was a good tool to help the imagination and give life to the characters.

S: What role did 3D printing play for you?

FC: We 3D printed a figurine of Lily, just so we could have it physically with us. It’s a bit like SketchFab, but in the physical world: it allows people to become more involved with the character, get a clearer idea of her.

For us, it’s also a pleasure to have Lily with us after spending so much time working on her design!

S: Did the 3D printed figurine of your character have the effect you wanted?

FC: Yes! We were present on many salons, we did many presentations. The object is precious to the people who’ve tried the game. They’re curious about it, want to touch it and know how it was made.

And that’s very good for the game, because it relies very much on the player empathizing with the character.

S: Did you have some previous experience with 3D printing?

FC: None whatsoever! To be honest, I didn’t even know how it worked, I discovered it all on your website. What’s good with your platform is that it’s full of information and tools to make 3D printing easier.

S: Can you tell me about the Sculpteo tools that were most useful for you?

FC: The most useful tool was the 3D viewer, which shows the zones of the 3D model that are too fragile to be 3D printed (to learn everything about the solidity check tool, click here).

There was also the interactive quoting system, that was very useful to anticipate the price, and, as I said, all the documentation: I didn’t need to do any further internet search, everything was already there!

I also contacted customer service to make sure I had understood everything correctly, and their answer was quick and clear, I felt well guided.

So in the end, I made 15 versions of the design before the solidity check was completely green, but at least, when I ordered, I was confident my model would be 3D printed correctly.

S: How did you go from the video game Lily to the 3D printed Lily? What did you change between the first and the 15th version of the figurine?

FC: I modified my Lily file on ZBrush to add a stand. I uploaded this first file to Sculpteo, and the viewer showed many zones that were to thin for 3D printing. So I made several iterations, and progressively, I made her hands thicker, put her fingers together, her arms on her sides, etc. In the end, the model was completely green (which means there’s no fragile parts) in the viewer, and I could 3D print it! 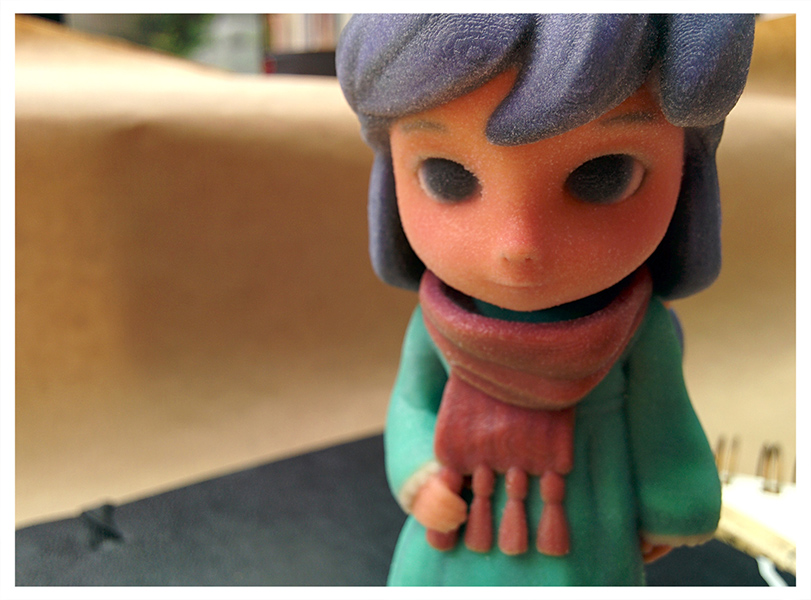 S: How much did the 3D printed figurine cost? Were you satisfied with this cost?

FC: It cost 130€, for a color 3D printing. I was very satisfied, and even pleasantly surprised: some services charge more for a 3D printing without colors. And it was impossible for us to have a colorless Lily, since colors are a very important part of her character and the gameplay!

Part 3: What’s next for the video game, and its use of 3D printing

S: Where is the project at, now?

FC: At the moment, it’s still a simple student game, it can be finished in 30 minutes, so it can’t be commercialised yet. But it’s received a lot of support and good critiques. We’ve been present at many salons, including the Indie Games Play salon. And we won the best student game award at the Ping Awards, we were at the Unity Awards in Los Angeles – we didn’t win, but we were nominated for best student project.

We’re motivated by the positive feedbacks and the people who’ve asked us to go further with this project.

S: And do you already have prospects to move the project further?

FC: Yes, we have a few: we were contacted for funding, and we’re contacting some producers. This weekend (Nov. 28-29), we’ll be at the Indie Cade salon in Paris, we hope to meet many people there!

FC: It might, yes! We would like to 3D print other characters: the father, the main militia guard. Several people also told us that they would like to own a Lily figurine!

We are very happy we could share the story of Lily, Colors of Santa Luz with you, and we invite you to try the game out for free online, follow the project on their website, Facebook and Twitter, and to go meet the team at the Indie Cade salon, this weekend!

If, like Florian, you wish to know more about our optimization tools, everything is explained here! And to get more information about applications of 3D printing in entertainment, visit our application page.