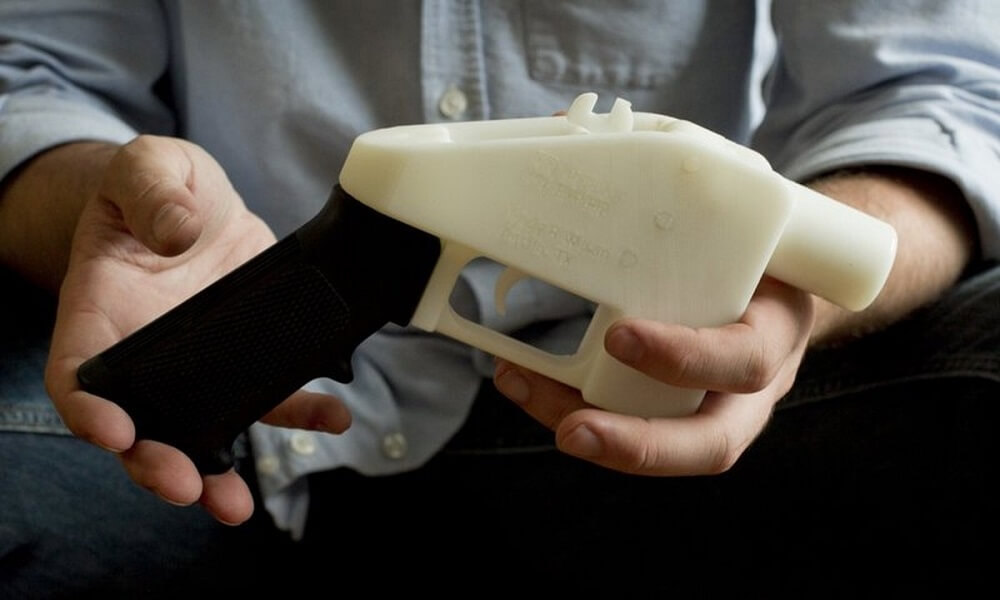 Why we don’t 3D print guns at Sculpteo

You know it: 3D printing is allowing to create many wonderful devices and a 3D printing service such as Sculpteo can help you to give life to various projects. But there are some devices and parts that we categorically refuse to print, and guns are one of them. In this blog post, we are going to explain why we don’t 3D print guns at Sculpteo.

If you have further questions about this subject, feel free to contact us, we will give you all the answers you need.

You certainly saw this news: it could soon be totally legal to 3D print guns in the US.

Let’s get back to the beginning of the story. In 2013, Cody Wilson is the first person designing and 3D printing a gun. He published his files online, and they have been downloaded by more than 100 000 people in only 24 hours. Due to the suddenness of the phenomenon, the US State Department forced Cody Wilson to remove these files.

This case opened a debate on 3D printed weapons. This debate lasted five years, but Cody Wilson and his company Defense Distributed triumphed and the 3D files to 3D print firearms online were back online. Indeed, the State Department allowed Cody Wilson to publish freely his designs and technical files of firearms. But the case is not over!

After that, eight states and the District of Columbia sued the government to block the settlement because of problems linked to the traceability of these 3D printed weapons. On july 31, 2018, a US federal judge in Seattle has blocked the release of software that allows consumers to 3D print firearms.

This case will be reviewed soon in order to see if it is really legal to publish these files.

You are now maybe asking yourself if you can use our 3D printing service to print a gun. The answer is no, but we are going to explain you why.

3D printed weapons: What about Sculpteo?

Sculpteo is an online 3D printing service. The process is quite simple, you only have to upload your 3D file, choose the technology and the 3D printing material that you want, and we will print all of it in one of our two factories. We do our best to give you the opportunities that you need to give life to your 3D projects. We can help you to manufacture a lot of different devices.

We surely want to give you all the freedom that you need to make the most of the 3D printing technology and create amazing projects. But we still have strict rules about the content that you are uploading on our site. Indeed, Sculpteo maintains the right to refuse the printing of some objects, such as firearms.

Keep in mind that we are a French company, and in France, owning a firearm is strictly illegal. As a French company, we respect the laws of our country and we are not allowed to 3D print these kinds of devices.

A conflict with our principles

One of the other reasons why we refuse to 3D print guns is that we care about your projects and about how our 3D printing service is used. That is why we have a content policy and don’t want to see any inappropriate content on our website, such as:

We are forbidding firearm printing for ethical reasons. We personally don’t want the name of Sculpteo to be involved or associated with weapon manufacturing. We don’t support firearms and weapons manufacturing.

3D printed firearms: A problematic use of additive manufacturing

Even if it is legal in the United States to possess a firearm, 3D printed guns are generating various problems. One of the first risks of these homemade weapons is that they create untraceable guns.

The regulation of the possession of weapons will be impossible if everybody can print his own firearms. Normally a gun has a serial number, and thanks to this number, you know who is the owner of the weapon. 3D printed guns are untraceable, and there is no background check so anybody can possess them: What about the age? The mental health or the criminal history? At Sculpteo, we think that the process is not safe enough, as these gun plans will now be accessible to anybody on the internet.

More than untraceable, these “ghost guns” as you call them are undetectable. 3D printed in plastic, they can easily evade metal detectors, which is also a big problem for security.

Because of all of these ethical and safety problematics, Sculpteo won’t print any guns or any gun parts. We hope that you understand the positioning of our 3D printing service about 3D printed guns. We are encouraging you to use Sculpteo’s website to improve your prototyping and production processes as long as it doesn’t go against our content policy.

Don’t forget to subscribe to our newsletter to get all of our news and see what we can actually print for you to improve your manufacturing process!