The Witchers' medallion is a silver symbol of the witchers' profession. It is sensitive to magic, vibrating and tugging on its chain when spells are being cast or magical beings, like genies, are present. This magic medallion shaped like a wolf's head is given to every young witcher candidate who has passed the Trial of the Grasses. The origin of the first medallions is unknown, though it is assumed they were made in the magic forge at Kaer Morhen. The medallions vibrate in response to magic in all its forms, including curses, charms and spells. They also warn of lurking monsters born of magic or magic experimentation.

Find more products in the shop of FabianDA 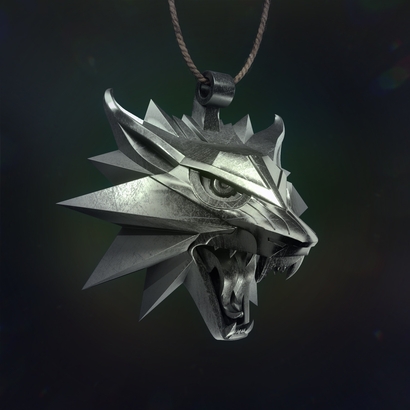 The Witchers' medallion is a silver symbol of the witchers' profession. It is sensitive to magic, vibrating and tugging on its chain when s…

Welcome to your future 3D printed Accessories, Jewelry, Bracelets, Pendants and Necklaces, Puzzle! The Witcher Medallion was designed and sold by FabianDA so you can modify it, make it as you want and use it every day! Buy more than seventy five varied 3D printing components to create this 3D printing model so it fits your way of life or the need and style of living of the person you want to gift it to. Elect the 3D printing material which your wish, the tint that fits your personality, the width and height you need your The Witcher Medallion in and you will obtain it 3D printed very promptly. Thanks to Sculpteo Marketplace, you can customize this design created by FabianDA and immediatly get an observation of the way the 3D printed object will appear. If you happen to hesitate or aren't a 3D printing adept yet, we'll also deliver you suggestions to optimize your The Witcher Medallion and make the best of the vision FabianDA place in it to conceive a very exceptional and custom-made Accessories, Jewelry, Bracelets, Pendants and Necklaces, Puzzle. Wheather you wish to get The Witcher Medallion 3D printed for yourself or for a friend you will let you to track it until it comes to you. You could change the design of this 3D model and personalize bits to really obtain a one of a kind of article, don't hesitate to adjoin tweaks and make this 3D printing design more unique and perfect for your personality. So if you like The Witcher Medallion, don't forget to examine another 3D models created by FabianDA to make other amazing 3D printing projects.