Once a good density compromise that depends on the resolution of the material to be used has been found, it’s important to analyze it in order to improve its quality in case you are not completely satisfied with it or to find problems that would make it not printable. These may occur in the case you haven’t paid enough attention when following the modeling guidelines just described.

Before proceeding to the analysis it’s better to unify the two meshes you have in this stage, which was generated from the two previous modeled shells. In this  we have to deal with just one mesh instead of two and we also will be later able to export it as a singular .stl file. This can be done with the command Mesh Merge ( 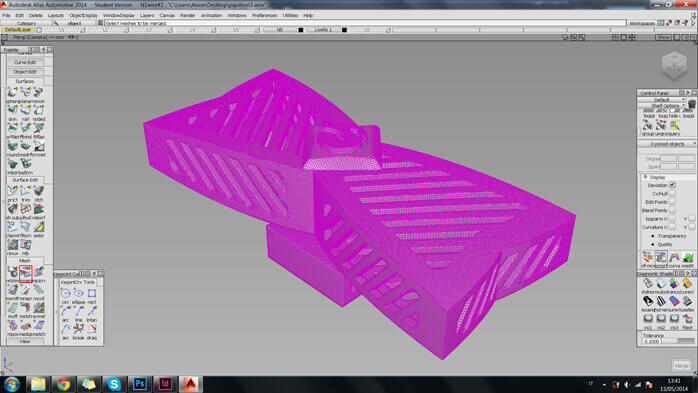 The next step is to check the MESH ORIENTATION.

Although it might be obvious to you, 3D printers can’t guess by themselves which is the interior or exterior side of your model, so you must be explicit about the sides.

The feature ‘Reverse mesh orientation’—which is available on Sculpteo— (

) allows you to check your mesh orientation.

Note that the blue color means exterior visible side, yellow means interior and not visible side of the model. Then if you see some yellow sections just select it and choose ‘Reverse component’ on the bottom right, until your model is completely blue. 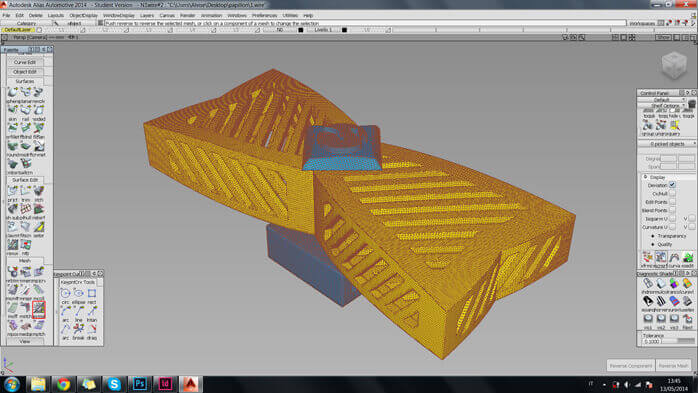 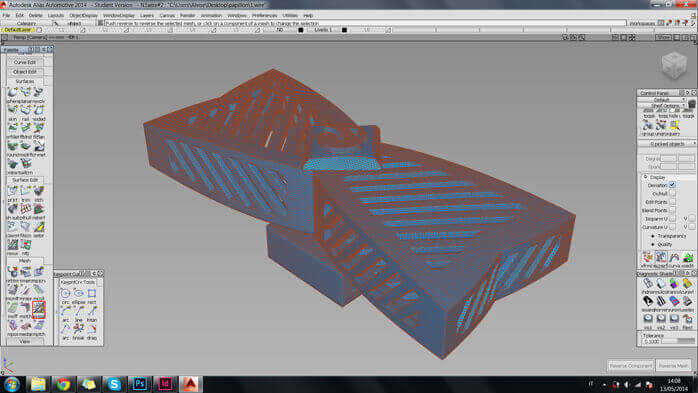 The next step is analyzing the structure and this can be done in the following ways.

you will find 2 useful tabs called ‘Mesh Information’ and ‘Mesh Topology Checks’. When your mesh is selected, the details about the mesh appears on them.

The first two items, ‘Number of polygons’ and ‘Number of vertices’, define the mesh density. As mentioned before, any number between up to 1,000,000 is considered acceptable, depending on the size of your model. If that’s not the case for your project, consider re-meshing your model or use the ‘Reduce Mesh’ (

) feature that will be described later to adjust the number of polygons.

The third item, ‘Number of boundaries’, should show 0 as value, if all the surfaces have been correctly stitched. If any boundary exists on your model, this needs to be fixed with an appropriate feature that will also be described later.

“Number of components” refers to the number of shells reported on your model. Even if you have merged your two meshes previously, the file will record them as two separate parts of the same model, so in this case, 2 components. In interlocked/moving 3D models like this one, every part should be a component (i.e. a shell), but it’s necessary not to have more than 1 component/shell in a singular part.

Then, in the second tab, we find 3 checks that can appear as ‘Pass’ or ‘Failed’. The first one, ‘Non-degenerate polygons’, refers to the presence of polygons in which boundaries coincide, and are therefore not visible. These polygons need to be deleted because they don’t occupy any area on the object’s surface, even if they are still mathematically present in the model, otherwise the machine will read this as an error.

The second one, ‘Manifold’ checks this already mentioned mesh feature, essential to have a correct printable model, because it defines a closed mesh where every edge is shared by exactly two polygons.

If any of these 3 checks appear as failed, you can – in some cases – repair them by just selecting the mesh and clicking on the ‘Repair All’ button on the bottom right of the viewer.

Otherwise, if no problem is reported, it means that you can proceed to export the mesh for 3d printing. It is also important to know that Sculpteo’s automated repair tools automatically fix these simple errors and you are also given the option of uploading the file through Sculpteo’s upload page to automatically handle such errors. 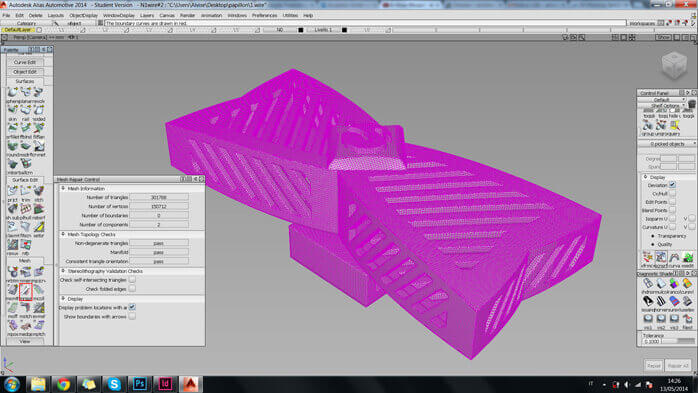 To export the model as a printable .stl file, select>Export>Rapid Prototype, select the mesh then click ‘Accept’  ‘Export’. The generated model is now a perfectly printable .stl file and can be uploaded to Sculpteo’s website and then you can 3d print it! 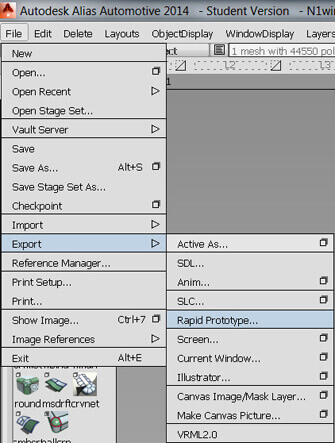 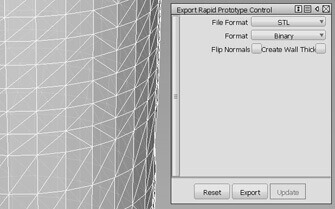