3. Avoid mistakes that occur when designing 3D files for 3D printing on Blender

Adjusting Scale and Units of Measurement

By default, Blender uses an inherent system of measurement which is not based on a measurable unit. However, as the object you will be designing will be physically manufactured, it’s important to define a unit of scale. To accomplish this, head to the “Properties” bar and select “Scene” which is represented by a small sphere, cylindar and light. There you will find measurement options under “Units” — choose “Metric”. By default, one “Blender” unit is equivalent to 1 meter. The “Scale” parameter allows you to raise or lower that equivalence globally. You’ll find the size of the object in the object’s properties (found by typing ‘N’). 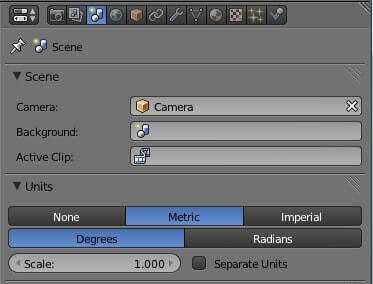 Certain Addons will be used during this tutorial and it will be important to turn them on. To do this, go into User Preferences (Ctrl+Alt+U) and into the “Addons” section. From there use the search function to find the necessary Addon.

Addons to search for and Activate: “Looptools” and “3D PrintToolbox”

To keep these Addons activated by default, click on “Save User Settings”. 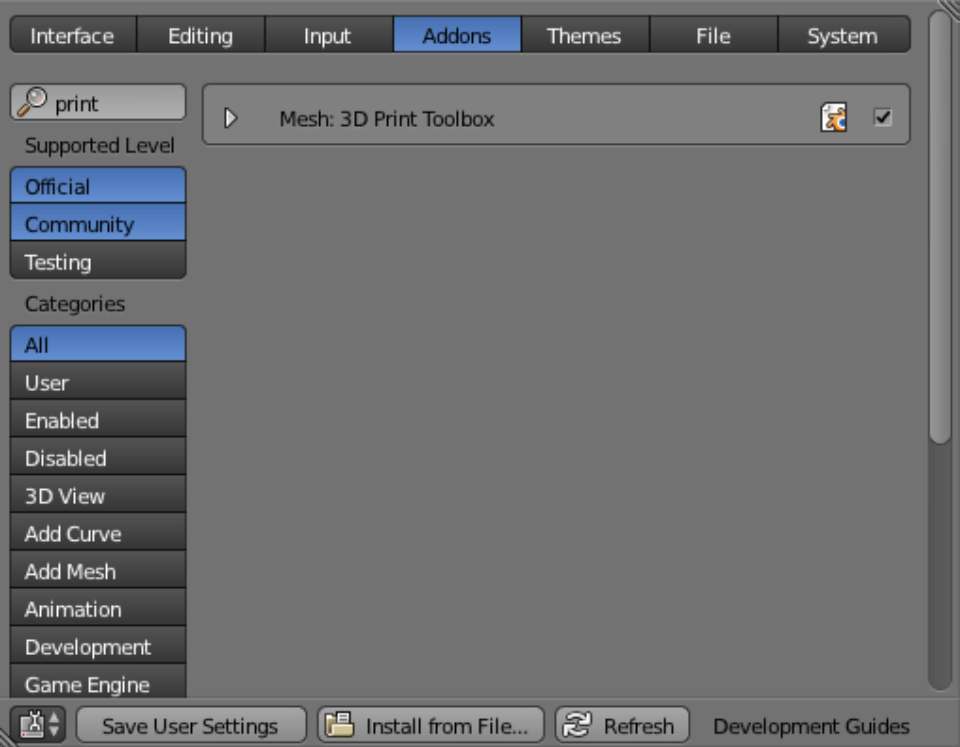 1.2. Polygonal Modeling for a 3D Print

When modeling for a 3D print, there are a couple rules that you’ll need to follow to ensure that your file will be printable. Those hints are listed in this section.

To explain the concept of a manifold model, we will use the example pictured below. The 3D model on the left does not consist of a volume, but instead only a series of surfaces which are either a) not closed or b) lacking a defined thickness. This will cause an issue for many 3D printing programs as they are unable to print models that do not have a defined volume. To ensure your model’s printability, it’s important to close any holes in your model. This is possible by clicking ‘F’ to create an Ngon (or a surface with ‘N’ faces), then extruding, then click ‘Alt+M’ to unify the model. It is also possible to use ‘Ctrl+F’ and “Grid Fill” to close any holes. Often holes of this nature arise when generating a model for an animation or a video game, as a series of surfaces in one of those situations can cheat physics as per what will and will not be seen – physics can not, however, be cheated during a 3D print.

In the example below, the two surfaces form two volumes, however they have a face which overlaps. The orange area in the example consists of two surfaces which are on top of each other, which will confuse many 3D printing programs, you’ll need to delete the faces and join the two volumes in order to create a printable model. In the case of more complex geometries, a “Boolean” operation will join the two volumes and save you the trouble of doing it manually. 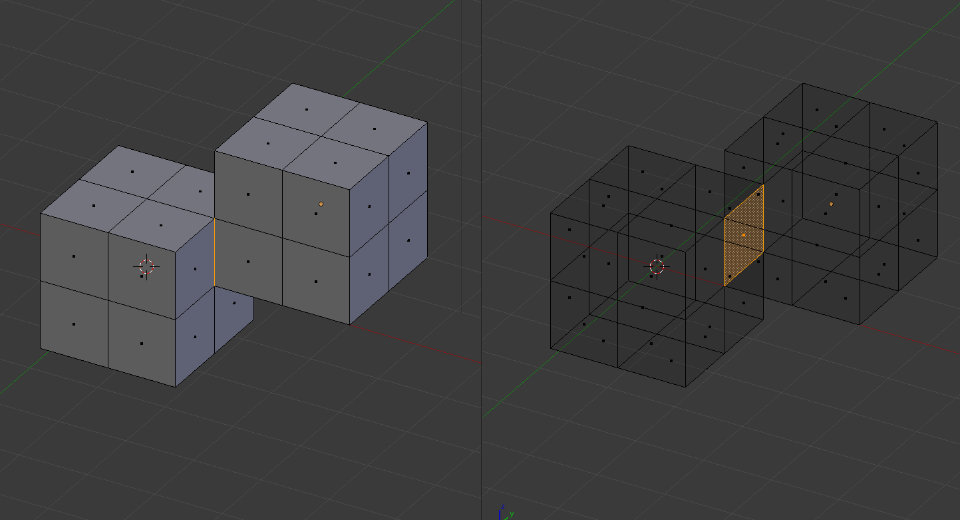 There’s no need to overdo your smoothing and subdividing, in fact it is important to minimize polygons to keep the file size down. In the example below, the Surface Subdivision Modifier is used once to attain a high quality surface. It is also possible to reduce the density of those subdivisions without losing too much of the general information of the surface using the Decimate or ReMesh modifiers as well.

It’s important to understand the physical limitations of the material in which you plan to 3D print. You must respect the minimum thicknesses for each material, such that every aspect of the model will be both printable and visible.

In the example below, you can see the top view of a beetle (top view is accessible by pressing 5 on the numpad). You can note the parts which are below 1mm (the minimum thickness for a plastic print at Sculpteo), as they are indicated in red. It’s important to keep in mind the minimum thickness for each material as you are creating your model, as each material has a different minimum thickness. Thankfully, after uploading onto Sculpteo, these parts will be automatically highlighted and our automated thickening tool can prepare the model for 3D printing. You can find more information on reviewing your file for a 3D print. 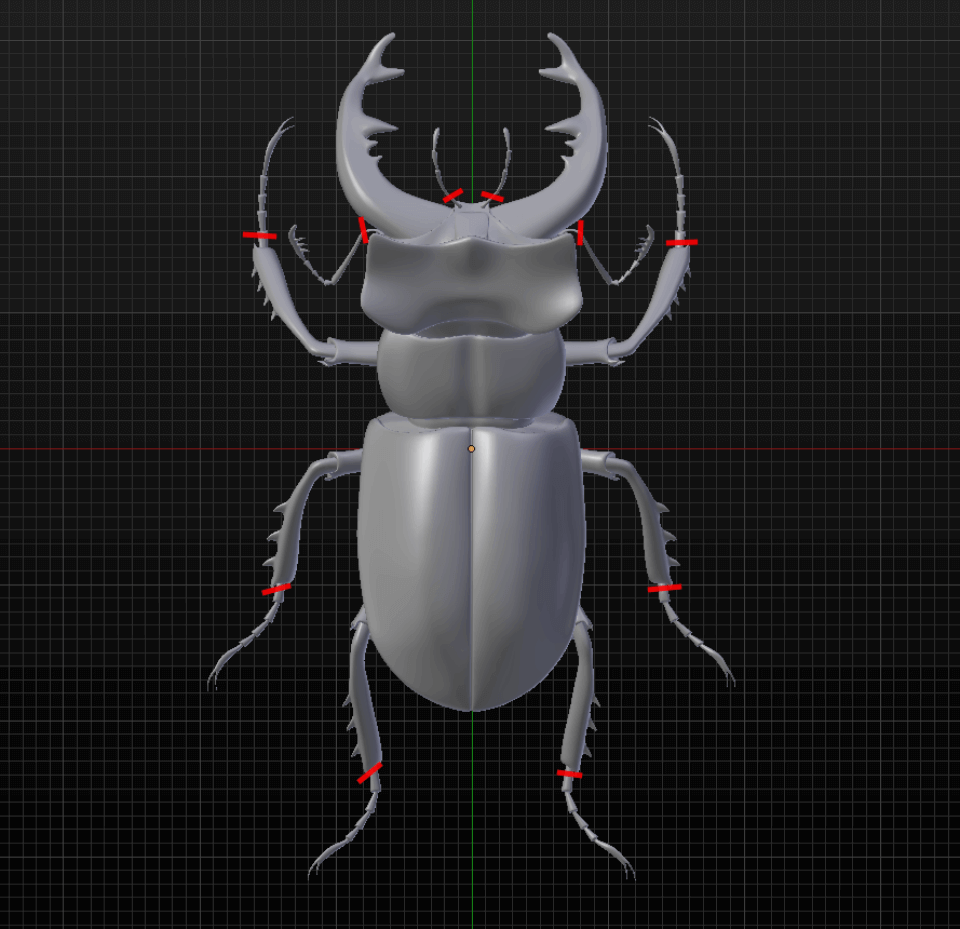 The inherent 3D modeling tools in Blender are numerous and vary greatly. We will present only the most commonly used tools below. For more information on all of the tools available within the software, check out the dedicated Blender wiki. 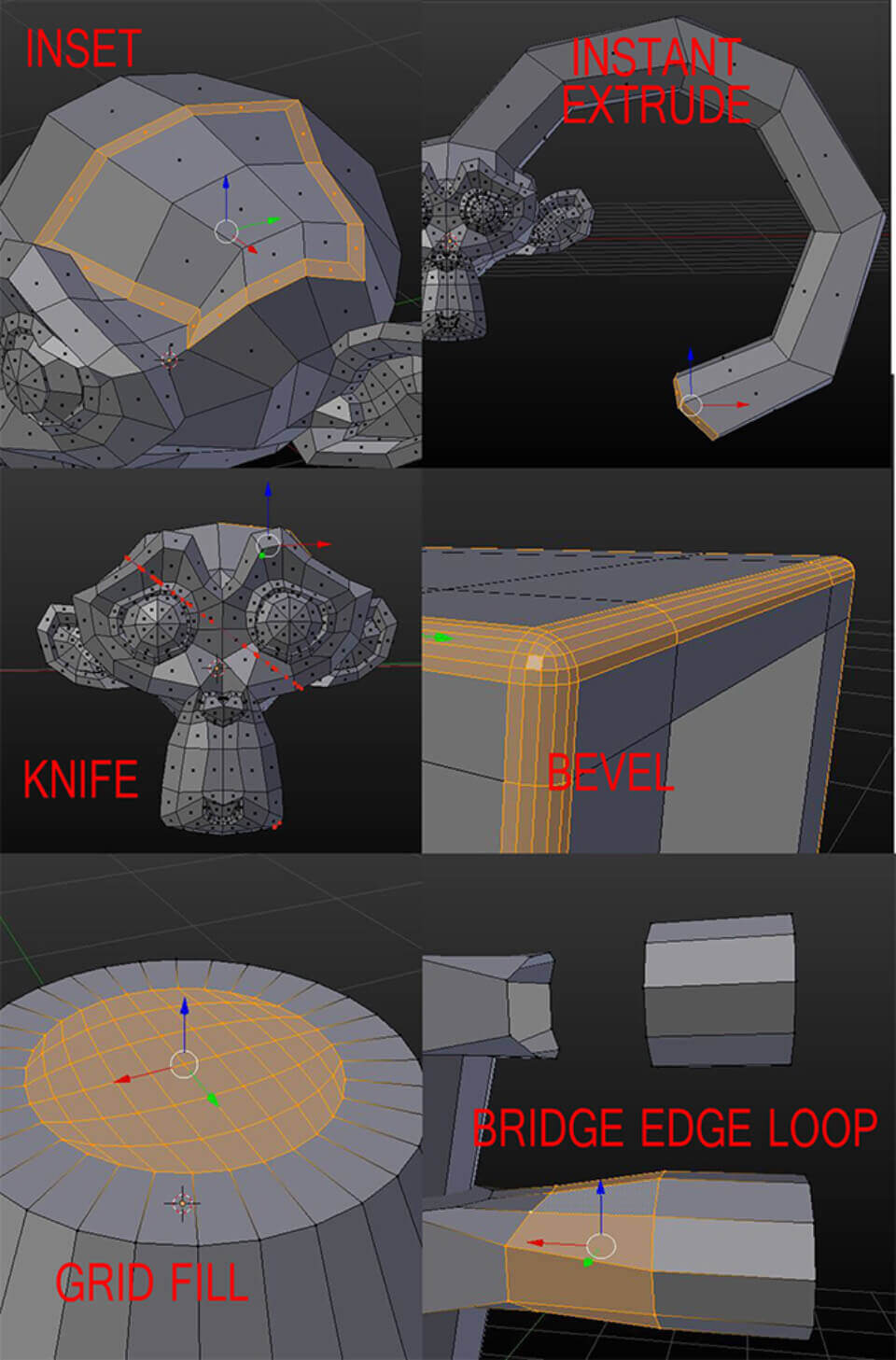 With this example, we’re going to create a simple, supported, and printable text in 3D on a platform. To start, add a text object in an empty scene.

By default, the object is just one surface to which you’ll need to add a thickness. To do that, head over to the “Properties” panel, and choose “Extrude” – that will allow you to add depth to the object. The “Depth” parameter will allow you to change the depth of the text more precisely, if need be.

As the letters are separate, we need to create a support using a Bezier Circle. In the BezierCurve tab, choose the “2D” option and play with the thickness of the stand along side the text to your optimal parameters.

With your desired geometry, its time for the preliminary export functions. As Blender only exports polygons, you must convert the model into a singular mesh before you can correctly export it. Use “Alt+C” then choose to convert the model to a mesh from the options of Curve/Meta/Surf/Text.

Repeat the operation for the text portion of the file such that it also becomes a mesh of polygons. The conversion into Mesh may generate double vertices which must be consolidated in edit mode. Using “Ctrl+V” then “Remove Doubles” will remedy the problem – and don’t forget to recalculate the faces toward the exterior (Ctrl+N). 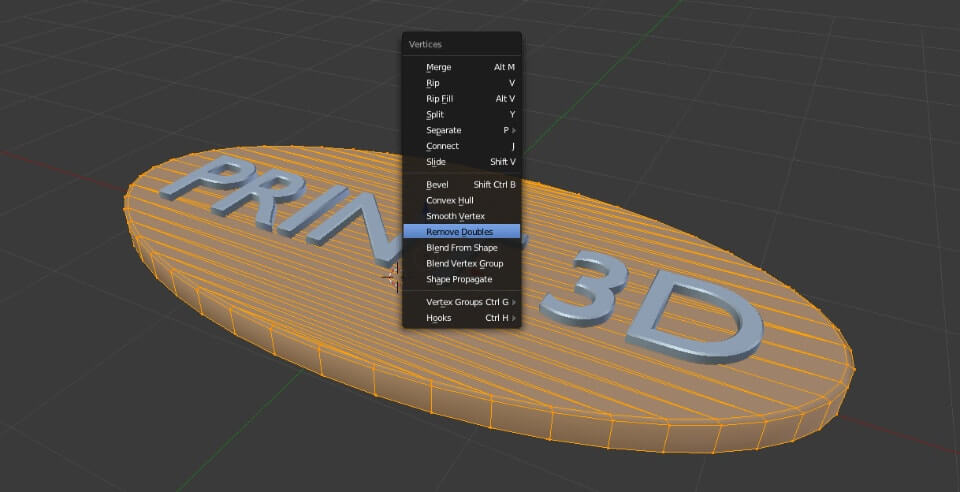 Your object is now ready to be exported for a 3D print.

Blender Modifiers can be applied to a model in an interactive and non-destructive manner, if used correctly. These functionalities are often referred to as a “Pile of Modifiers”. The advantage of this technique is that these modifications are non destructive to the model and do not modify the model’s topology when used in Edit mode. Modifiers can be added under the “Modifiers” tab in the properties menu (on the right side of the interface by default).

Model a single side: The Mirror Modifier

The Mirror Modifier mirrors the geometry of an object on an axis. This modifier is very commonly used and relatively simple to operate. However a few errors ought to be avoided if you’re modeling for a 3D print.

Always verify that the axis of symmetry is in the central loop of the model. Once that central loop is defined, check the “Clipping” box from within the modifier. This will block any portion of the model from crossing the boundary of the central loop. A best practice would be to put the Mirror mesh first among the list of modifiers – this will ensure that the mesh is manifold. 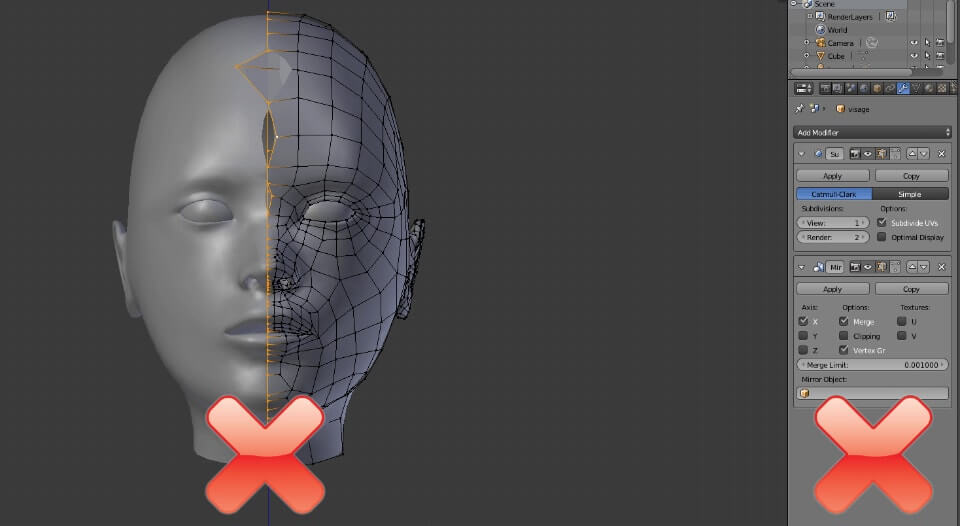 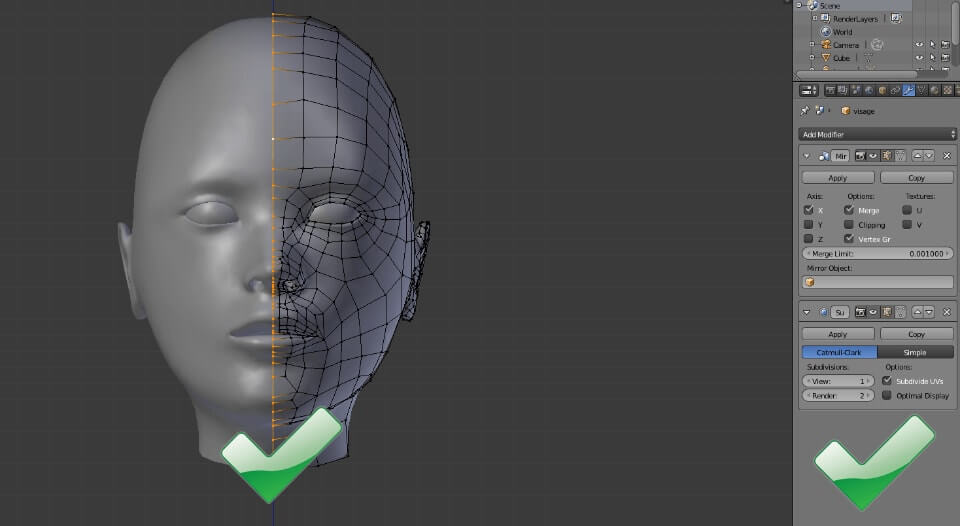 Again when using the Mirror Modifier, it is important to delete all of the internal faces that can be created after the duplication of a manifold mesh. As was described earlier, these faces serve no purpose and, without a thickness, they will present a problem during a 3D print.

Reducing the number of faces (Reducing File Size): The ReMesh and Decimate Modifiers

The ReMesh Modifier will remodel the topology of a mesh without modifying general geometry. This modifier can be applied to a mesh that has too many faces or is too large and irregular. This problem can arise when importing a file from another program or when dynamically sculpting a model. 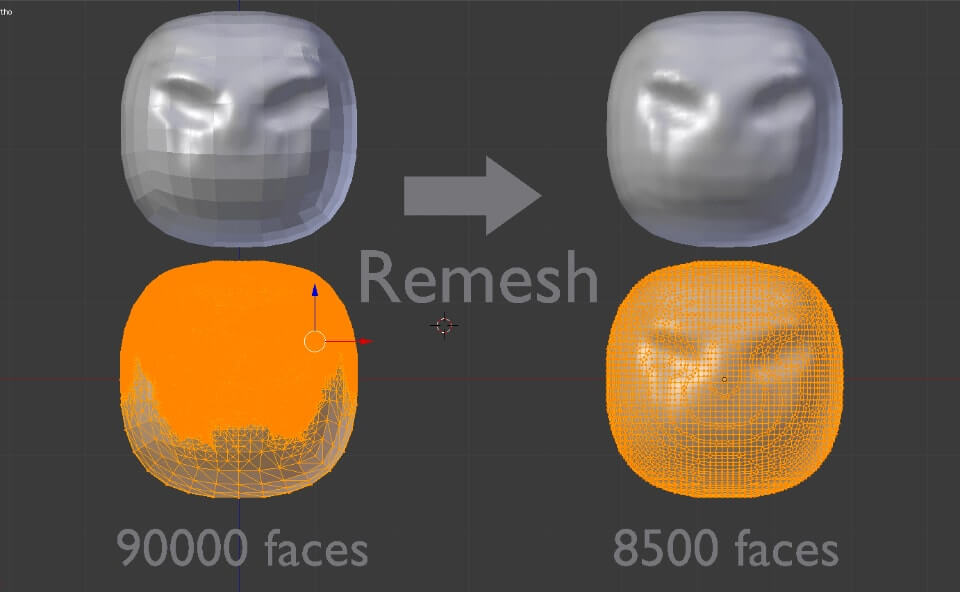 Again, when looking to create a smaller and more easily exported file, the Decimate modifier can reduce the number and the density of faces. This modifier more precisely respects the geometry of the model but is not as respectful of the topology (when compared with the ReMesh modifier).

Adding thickness to a surface: The Solidify Modifier

The Solidify Modifier gives thickness to a surface. The “Thickness” parameter determines the thickness of the object in Blender units. This tool is ideal for creating a printable model out of a series of surfaces.

Check “eventhickness” if your model has pronounced angles. This parameter will conserve a singular thickness throughout the geometry of your model and will avoid fragile areas.

Sticking one geometry to another: The Shrinkwrap Modifier

The Shrinkwrap modifier sticks one surface to another geometry. When teamed up with the Solidify modifier, it can create clothing or accessories that will be attached to a person or an object. During a 3D print this modifier is essential for creating an object which is “stuck” to another. To avoid duplicated surfaces, be sure that the offset value is “0” within the Solidify modifier. 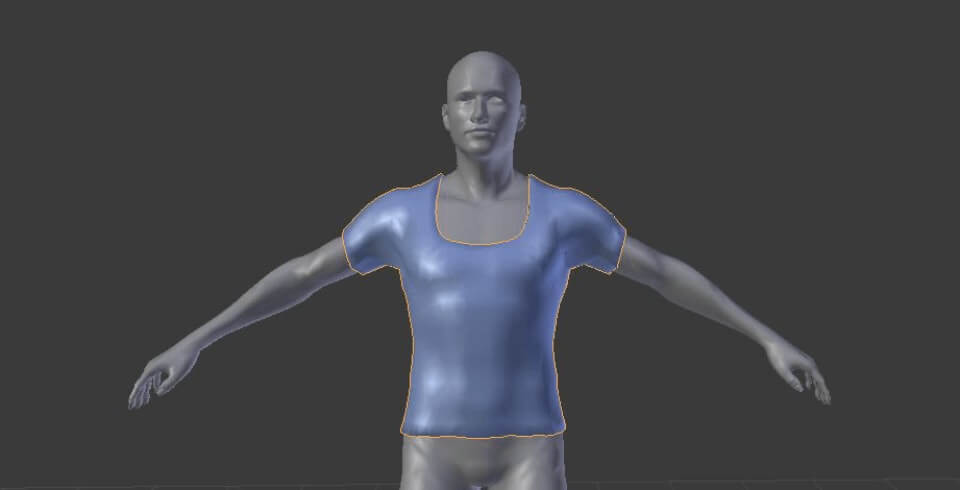 The Boolean Modifier allows for a boolean operation to be carried out between two volumes without destroying either. This functionality is ideal for creating a hollowing hole of the object, or to delete the intersections of faces (which can cause problems during a print).

Below, for example, we used made a boolean operation in “Union” mode in order to remove the intersection of faces. 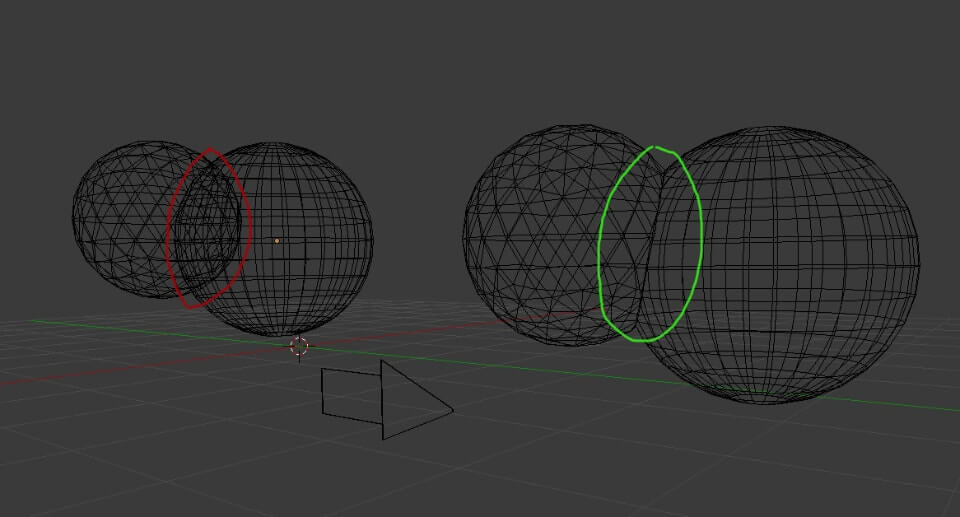 To put these modifiers to use, we’re going to create a cat’s head while using as little material as possible. We’re going to hollow out the head by adding two holes which will serve as a release for the excess powder in the model. This material reduction is only relevant to SLS and other modes of powder-layering printing.

To begin, create a sphere centered on the z and y axes.

In ‘Edit’ mode, with proportions activated, displace the vertices to create a volume.

Then, in ‘Object’ mode, add a Plane where you will design the details of the head. The following Modifiers will be necessary to create a geometry correct for 3D printing.

Using simple extrusion techniques, you will be able to model different details of the face. The collection of Modifiers will allow you to create a singular volume with a simple thickness.

Adding the Solidify Modifier will give the object thickness. In this example we have given a thickness of 0.12cm for a head that’s 2cm in size. The Subsurf modifier will be used after the Solidify modifier such that it does not deform the ears of the model.

In order to add a hollowing hole, add a cylinder where you would like the hole in the object. Then adding a Boolean Modifier in ‘Difference’ mode will generate a hole.

Your object is ready to be exported for 3D printing.