Best of the Sculpteo Blog

Mechanical parts are a large field of application for 3D Printing. Companies across multiple industries are resorting to this technology for mechanical projects, both at prototyping and end-product manufacturing stages. If you are here to get insights into the benefits you can hope to pursue with this technology, we will go through the advantages of 3D Printing for mechanics as well as successful mechanical part manufacturing projects across sectors.

What are mechanical parts ?

Before we get in the details of what 3D Printing can bring to mechanical projects, let’s elaborate on the type of parts taken into account in this area. Mechanical parts are components used to create whole mechanical systems. These mechanisms aim at specific applications, which they achieve by transforming the force they are applied in a controlled movement. Based on their goal, these systems can include parts such as friction devices (clutches, brakes), linkages such as hinges and joints, or structural components like brackets and ducts, and others.

3D Printing for mechanics: What are the advantages?

The performance of mechanical parts largely comes down to the extent to which the structure can be optimized. In this regard, 3D Printing offers an unparalleled design freedom and allows to make unprecedented high-geometries. Parts can be 3D printed regardless of the complexity of their shapes, which opens up great possibilities for topology optimization. In turn, this design freedom can allow for better compromises between weight, strength, and production costs than with other manufacturing processes. Optimizing parts correctly for Additive Manufacturing takes skills and experience, and may not look at everyone’s reach. If you need support to master the specificities of 3D Printing, experts such as Sculpteo Studio’s engineers and designers are here to help you build up the strengths of your mechanical project.

While most manufacturing techniques rely on the use of welding and other assembly processes, 3D Printing can help you cut this step out through integrated assembly designs. Additive manufacturing allows to interconnect individual components into one single 3D printed part. This approach changes the way one produces, not only by minimizing assembly works but also because it mitigates the risks of weakening parts that assembly processes may involve. Making integrated mechanical parts, along with alleviating your workload, is also a good way to cut costs.

3D Printing overall is the technology that best allows to take ideas to real prototypes, in terms of time. Indeed, Additive Manufacturing has always been renowned for the flexibility it offers for making, testing, and re-iterating improved designs. Thanks to this potential, mechanical part projects can be expected to be developed at a much higher pace than with other manufacturing processes.

Apart from being a reliable mechanical part manufacturing tool, 3D Printing should also be regarded as a sound solution to design leaner production processes. The reason for this is the flexibility that Additive Manufacturing presents, which allows to launch on-demand, small mechanical part batches into production and to get them quickly. Switching to this approach can appear to be interesting for companies looking to take the burden of their stock off their warehouses.

3D Printing has been refined over its many years of existence and adapts to an ever-increasing amount of materials, including plastics, resins and metals. 3D Printing can fit the technical constraints of your project, and impart your mechanical parts with the properties of different materials, such as heat-resistance or flexibility. With the development of high-performance materials, new possibilities are offered to you for your most demanding mechanical applications. Here is a selection of interesting 3D printing materials for your next mechanical projects: 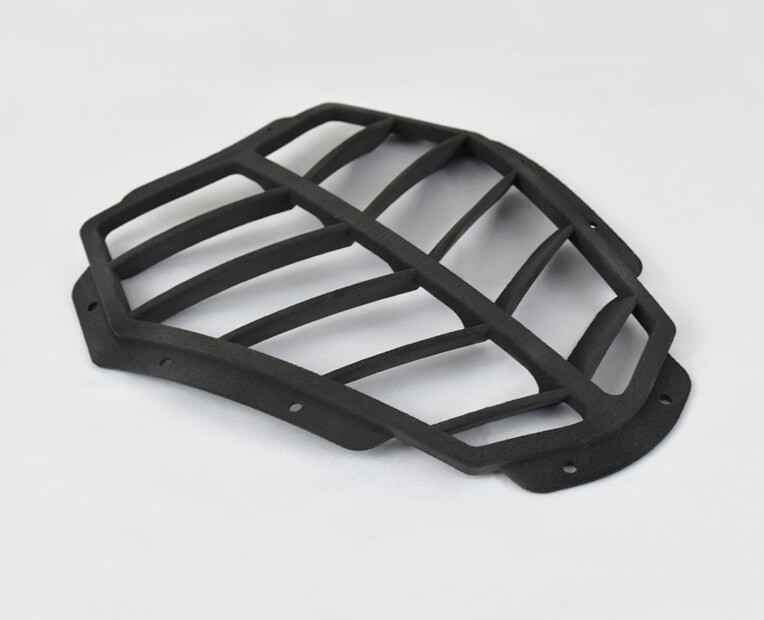 What 3D Printing mechanics allows for across industries

GE Aviation, a General Electrics subsidiary specialised in jet engine production, relies on Additive Manufacturing to make jet fuel nozzle tips. The company announced in October 2018 that they 3D printed as much as 30 000 of these parts, as they made significant gains with this technology. With Additive Manufacturing, GE Aviation got to decrease the weight of the tips by 25%, and besides, to design an integrated assembly system which allowed to decrease the number of pieces within the part from 20.

Transportations of all kinds can take advantage of the potential of 3D printed mechanics, and trains are no exception to the rule. German Mobility Goes Additive is a network seeking to foster the adoption of 3D Printing in various industries. They worked alongside Hamburg’s metro operator Hamburger Hochbahn AG to develop 3D printed safety-relevant and operational components for their vehicles. The project they achieved encompassed 3D printed mechanics such as brakes, and set a milestone for the use of Additive Manufacturing in the transport industry.

Car manufacturers have found many appeals in 3D Printing, and one of them certainly is spare-parts production. When it comes to old models especially, getting replacement parts for out of production vintage car turns tedious. To provide for this issue, Porsche’s old car division Porsche Classic is using Additive Manufacturing to get the spare parts needed to refurbish models. 3D printed mechanical parts such as the clutch release lever of the rare Porsche 959 have been achieved that way.

3D Printing mechanics also has a number of applications in electronics. For Drone manufacturers, whose products integrate both mechanical and electronic systems, Additive Manufacturing appears to offer distinct benefits at development stages. For company UVify, which specialises in racing drones manufacturing, this technology has been used as a bedrock asset for prototyping. As the drones UVify is developing must present a good balance among performance, aerodynamics, and design, the company can go through tens of iterations. 3D Printing is in that sense a technology that UVify considers as key for their activity.

Spacecraft manufacturing is also a good example of how 3D Printing can be utilized to make, test and get functional parts time-efficiently. NASA and satellite launch service Virgin Orbit have collaborated on the creation of the first 3D printed rocket combustion chamber, which was successfully tested at NASA’s Marshall Space Flight Center. This project falls within NASA’s vision of harnessing 3D Printing to develop safer, more time-efficient and cost-effective launch devices.

The future of 3D Printing for mechanics: Compliant mechanisms

Compliant mechanisms are, in contrast with traditional ones, bending systems relying on elastic deformation to get their mechanical properties. These devices are starting to generate interest across industries because they offer opportunities that rigid mechanisms can’t allow for. First, instead of relying on separate elements, compliant systems can be made in a single piece and achieve similar results as traditional mechanisms. Making built-in devices of course lead to more cost-effective production processes, as assembly steps are completely removed. Also, the ability to move as a whole rather than as separate pieces reduces the backlash and the friction that mechanisms suffer from. This sustainability, in turn, translates to better performances.
Applications for compliant mechanisms could be found in different industries such as Aerospace, in which the potential for more portable hardware would be harnessed. But regardless of the use, 3D Printing would definitely be a good candidate for compliant mechanism manufacturing. The reason for that is the complex designs of these devices, which involves a need for manufacturing processes offering a great flexibility.

3D printed mechanical parts have applications across all sectors, and probably has benefits to offer to your own industry. Upload your 3D file onto our online 3D Printing service to get an instant quote, and get to know how your mechanical project can make use of Additive Manufacturing today.