Design of the week : The 12 signs of the zodiac 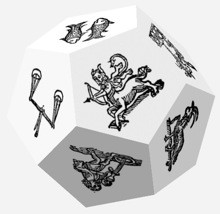 Astrology has featured prominently in the media in recent times.

TIME magazine even reports that astronomers at the “Minnesota Planetarium Society” have discovered that the alignment of the stars as seen from Earth has changed as a result of the moon’s gravitational pull on the Earth which makes it oscillate around its axis. This makes the 12 zodiac signs out of sync with the dates given for your horoscope.

Reflecting this topic, I would like to share with you this dodecahedron depicting the 12 signs of the zodiac.

Did you know? Your star sign is determined by the Sun’s position on the day you are born. Ancient Babylonians had 13 constellations, but wanted only 12, so threw out Ophiuchus, the serpent-bearer.