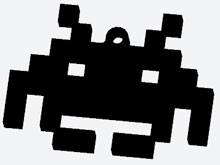 Space Invaders enemies come out into the real world with this customizable keyring.

Space Invaders is an arcade video game designed by Tomohiro Nishikado, and released in 1978. It was originally manufactured and sold by Taito in Japan, and was later licensed for production in the United States by the Midway division of Bally. Space Invaders is one of the earliest shooting games and the aim is to defeat waves of aliens with a laser cannon to earn as many points as possible. In designing the game, Nishikado drew inspiration from popular media: Breakout, The War of the Worlds, and Star Wars. To complete it, he had to design custom hardware and development tools.