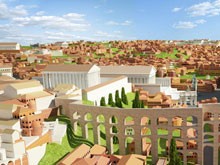 Rome Reborn is an international initiative whose goal is the creation of 3D digital models illustrating the urban development of ancient Rome from the first settlement in the late Bronze Age (ca. 1000 B.C.) to the depopulation of the city in the early Middle Ages (ca. A.D. 550).

With the advice of an international Scientific Advisory Committee, the leaders of the project decided that A.D. 320 was the best moment in time to begin the work of modeling. At that time, Rome had reached the peak of its population, and major Christian churches were just beginning to be built.

Having started with A.D. 320, the Rome Reborn team intends to move both backwards and forwards in time until the entire span of time foreseen by our mission has been covered.

This video presents a fly-through of the latest version of Rome Reborn (2.2)