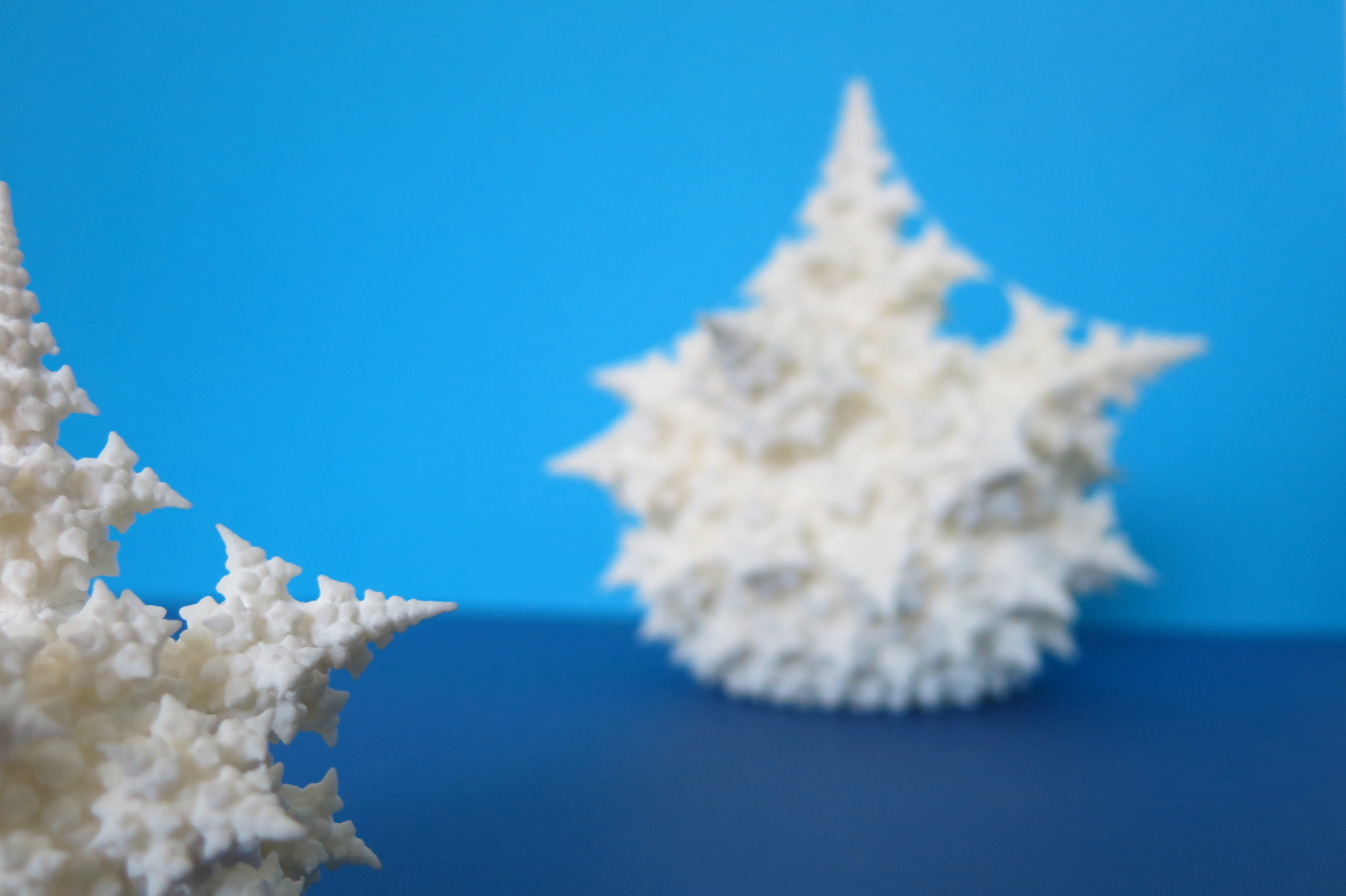 Mathematics is often considered boring and useless for most students. Artists, architects, and engineers know that math is more than strange symbols and numbers put together, instead they are a great source of inspiration in art.

You’ve probably already seen Escher’s drawings depicting animals that fit to cover the plane or his impossible stairs and fountains where the water never ends. With 3D printing, we can now easily make this illusion become real as shown in the following video from the Technion (Israel Institute of Technology).

Let’s have a look at our own mathematical gallery.

Fractals are everywhere around us: a tree with its multiple branches behave like a fractal and each of its leaves when you look at their veins. The leaves on a fern are a great example of fractals. The concept is very simple: it’s an object composed of a repeating pattern that can be seen at every scale. You can zoom in as far as you want and will always see the same pattern. Another example is the romanesco broccoli which could be seen as multiple sets of small romanesco broccoli glued together. 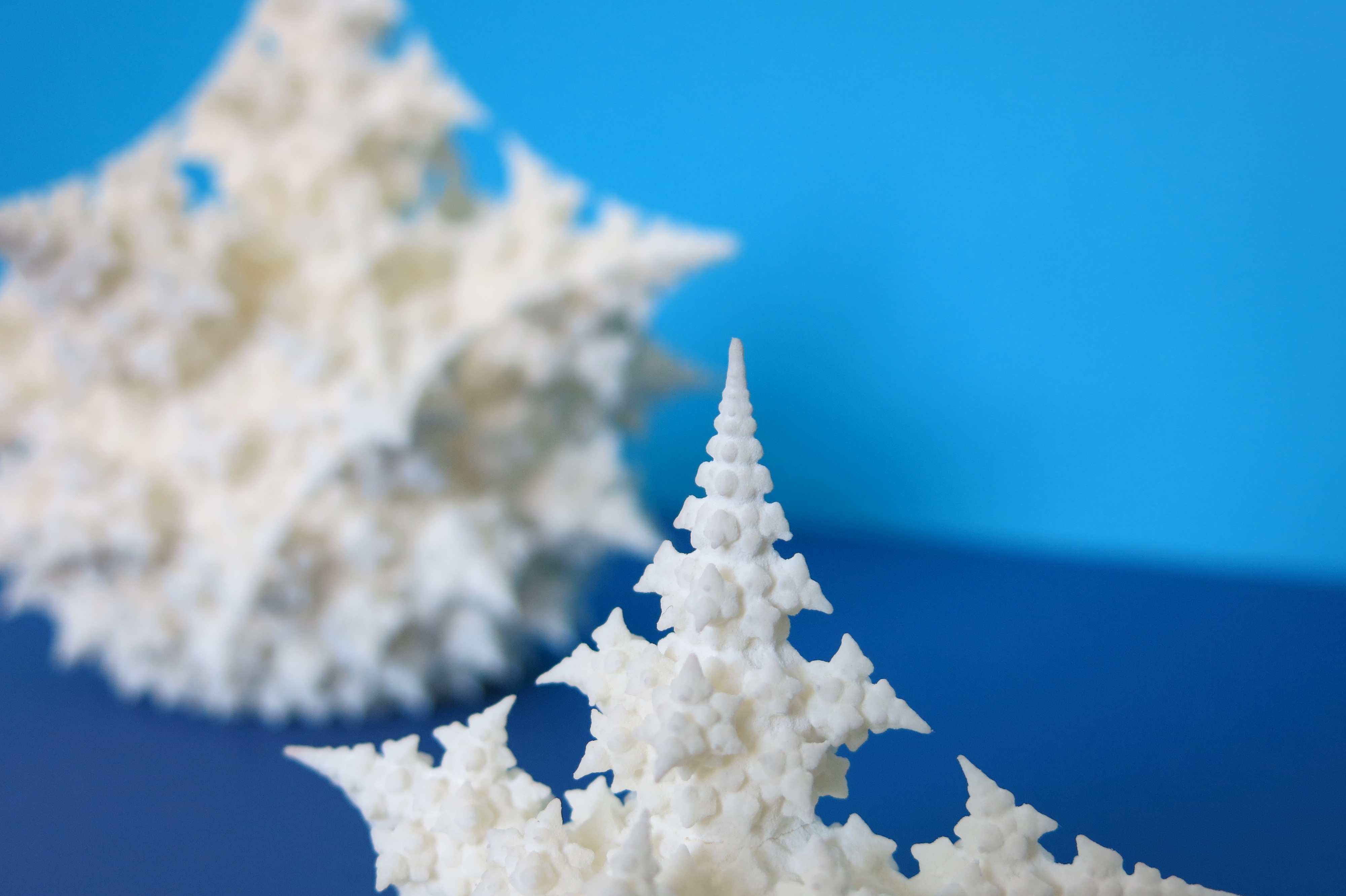 Details of a 3D printed fractal in front of it’s full version. Credit for the design: Jérémie Brunet

The problem with fractals is that they are mathematical objects with infinite details that cannot be manufactured. Actually, it’s impossible to really “make” a fractal because we’ll always be limited at the atomic scale whereas such limits don’t exist in a mathematical world. But we can try to obtain a good approximation of those objects and 3D printing is a very good candidate for this work for two major reasons:

First of all, fractals are generated on the computer by using a software like grasshopper combined with Rhino and an STL file can very easily be generated.

The other reason is that 3D-printing allows reaching a very low scale no matter the size of the global object. A 10 in object with 0.1 in details is far enough to get the feeling that the object is mathematically perfect. 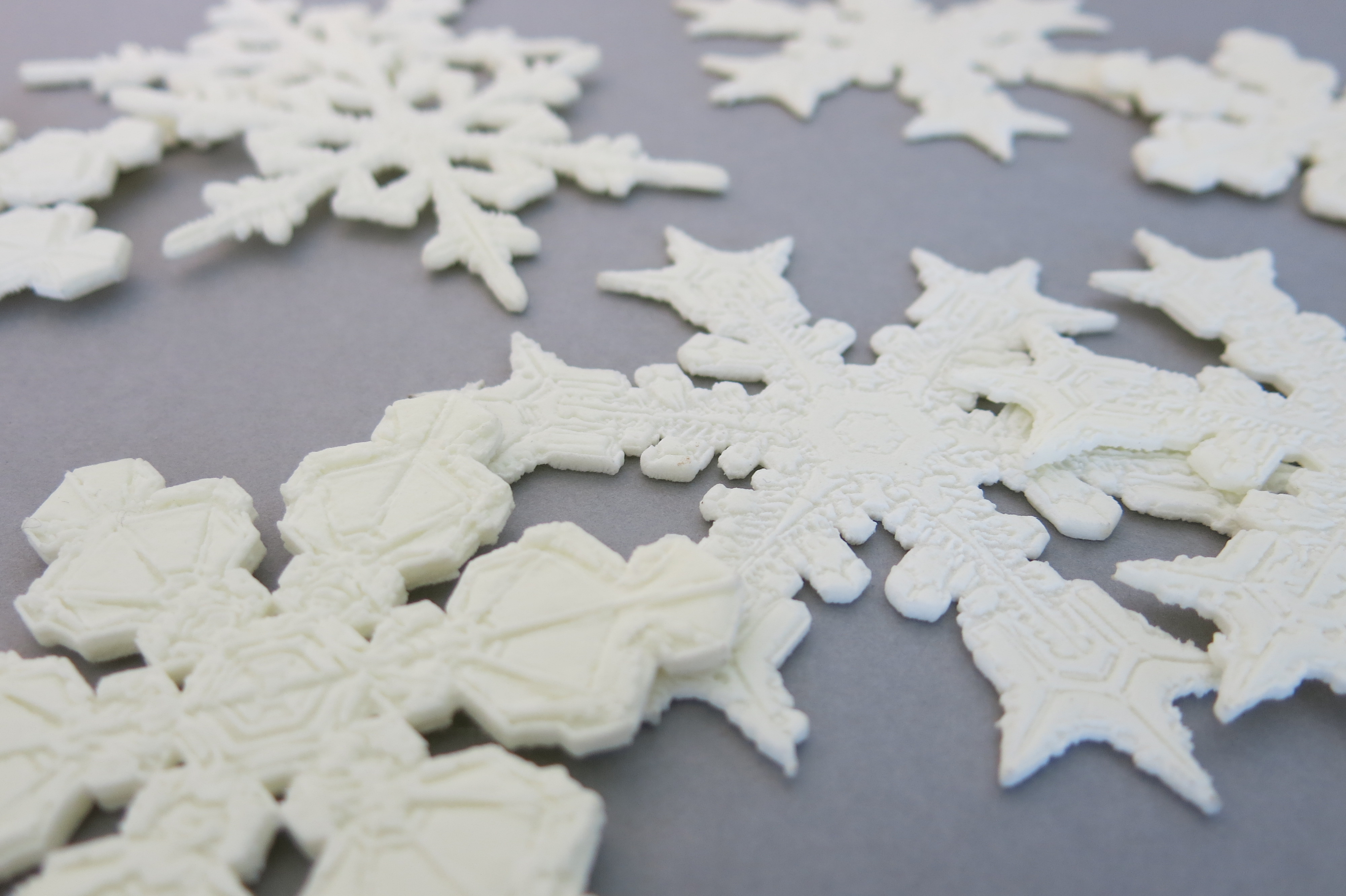 As the water turns to ice in the high layers of the atmosphere, it creates fractal structures commonly known as snowflakes.

Representations from another dimension

Don’t be afraid, no green aliens will appear in your living room. The frightening expression only means that these objects are the “shadow” of 4-dimensional (or more) into our 3-dimensional world. Imagine a 2-dimensional creature that lives in a sheet of paper. This creature could never imagine what a cube could look like, just as we humans cannot imagine what a hypercube could look like. But if we put a cube down on its plane universe, it could see the shadow of the cube and imagine the shape of the cube. The following objects are created on exactly the same principle. They help us to visualize objects we cannot see or touch. 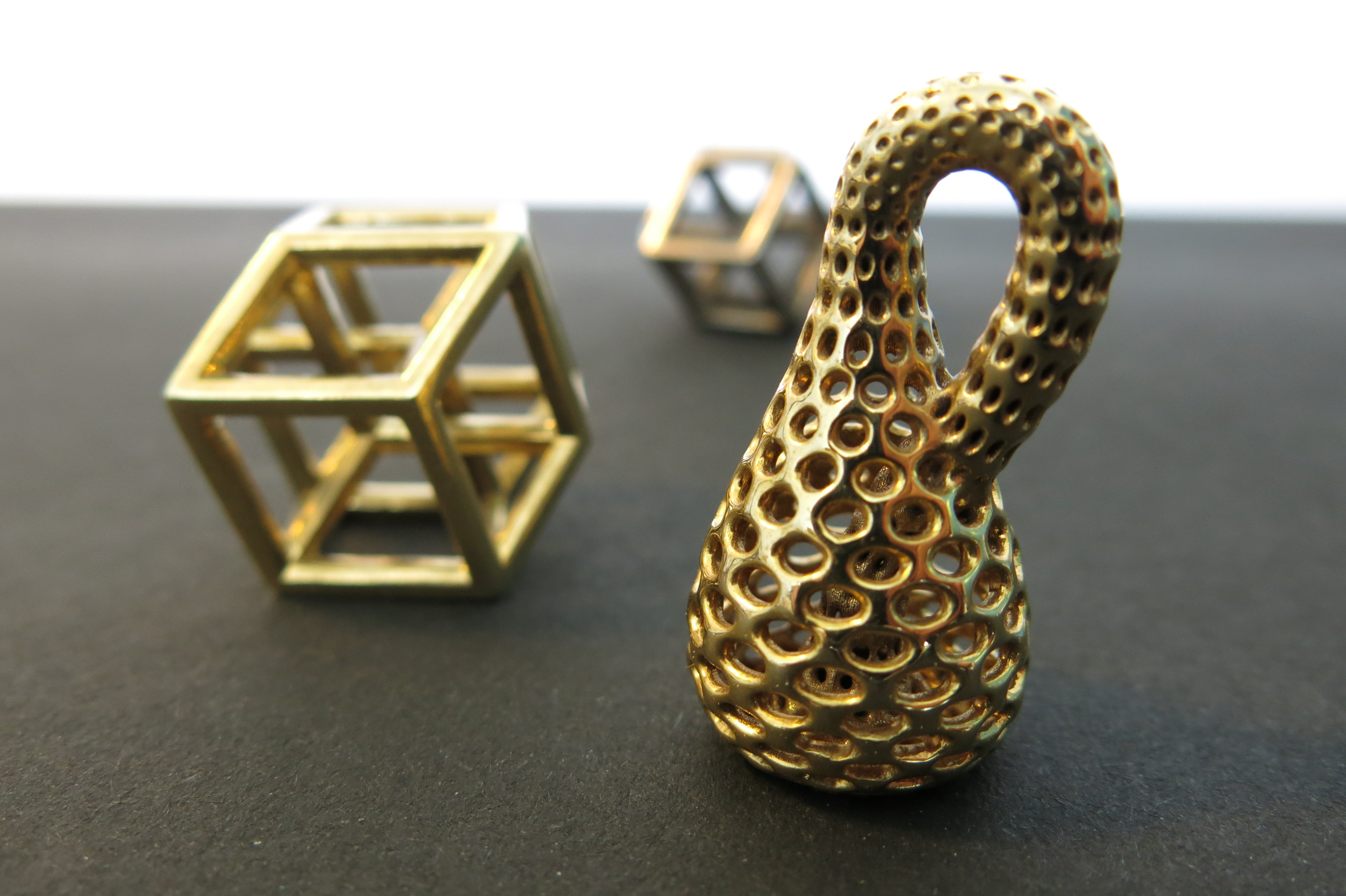 The Klein bottle (foreground) and the hypercubes (background) aren’t 3-dimensional objects : what you see is their “shadow” in our world

The Klein bottle in the foreground is a surface whose inner face is also its outer face. It’s the same type of object as the Möbius strip. As you can see, the bottleneck loops with the bottom and what was the inside of the bottle becomes the entire universe: better avoid stocking something in this bottle!

The two hypercubes you can see in the background are a good representation to help us understand how the hypercube “works”: it is a set of eight perfect 3-dimensional cubes linked together. Each one is surrounded by six cubes, one on each face. Try to create this object with eight dices, you’ll probably become crazy like our 2-dimensional friend trying to build a cube inside its plane world with six squares. Though, if we accept to give up the idea of keeping perfect cubes, we can set together eight hexahedrons and imagine how the 4-dimensional object look like the same way we see a cube when we look at the drawing of a cube in perspective.

Mathematics is also a great tool for physics and engineering. In these two areas, we use math to describe a phenomenon in a restricted area. The speed of each particle in a fluid for example or the stress in a mechanical part. Even if these applications are more concrete and motivated by research or development, they remain fascinating and beautiful. 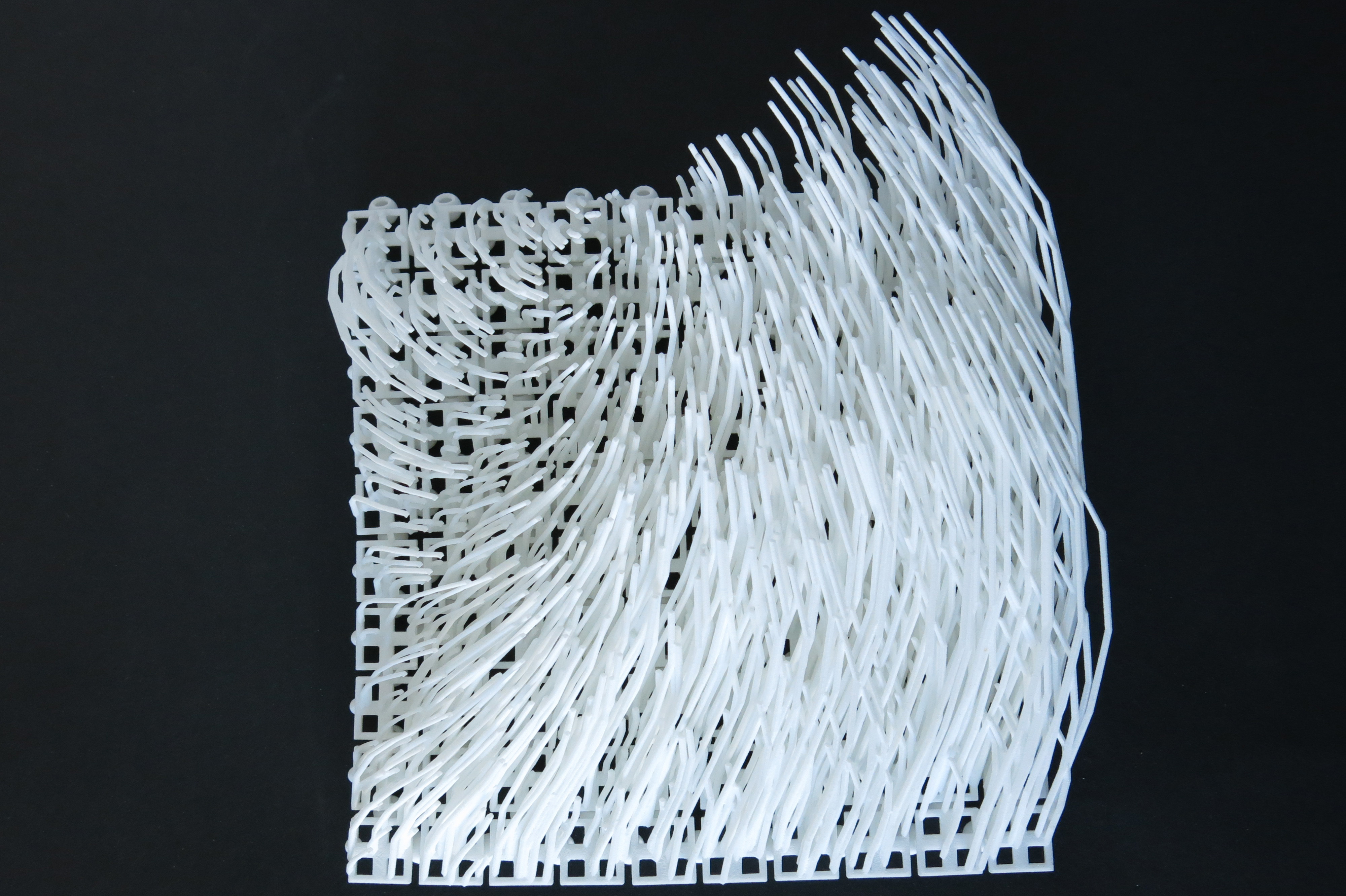 White platic is used in this modelisation

This wonderful object takes advantage of the rigidity of our white plastic to represent the speed of each particle of a fluid on a square. The length of the stem shows the speed. We can visualize a turbulence here. 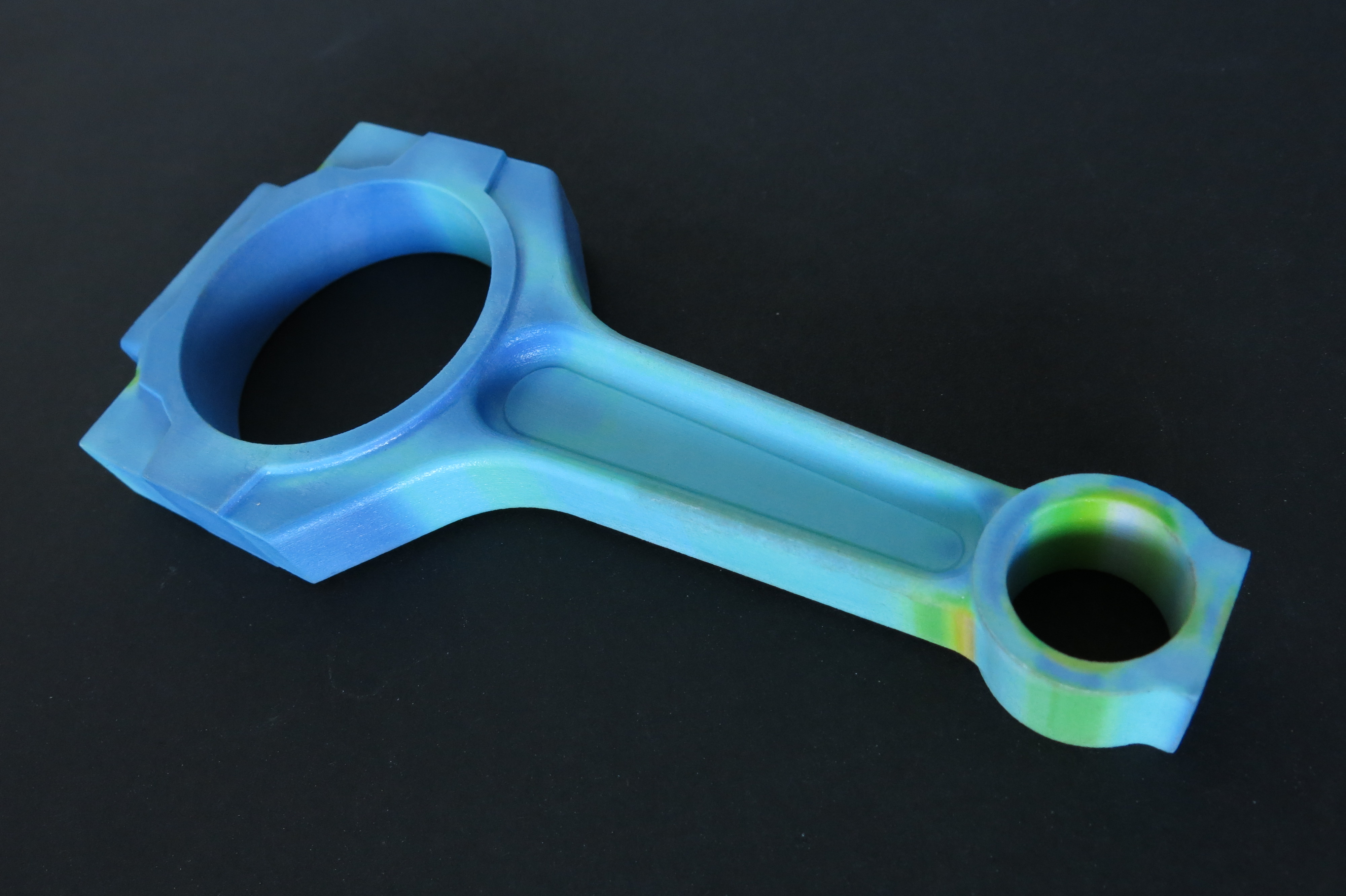 Multicolor material is used in this modelisation

On this part, the color shows the stress. The higher it is, the closer it’ll be to the red. Our multicolor material has been used for this in order to get the texture directly from the software and get the most accurate rendering as possible.

Mathematicians have no limits in their imagination and neither do you. With 3D printing, all virtual object can become real and no geometry is too complex for this technology. Interlocked solids with thousand faces, dodecahedrons, icosahedrons and so on. 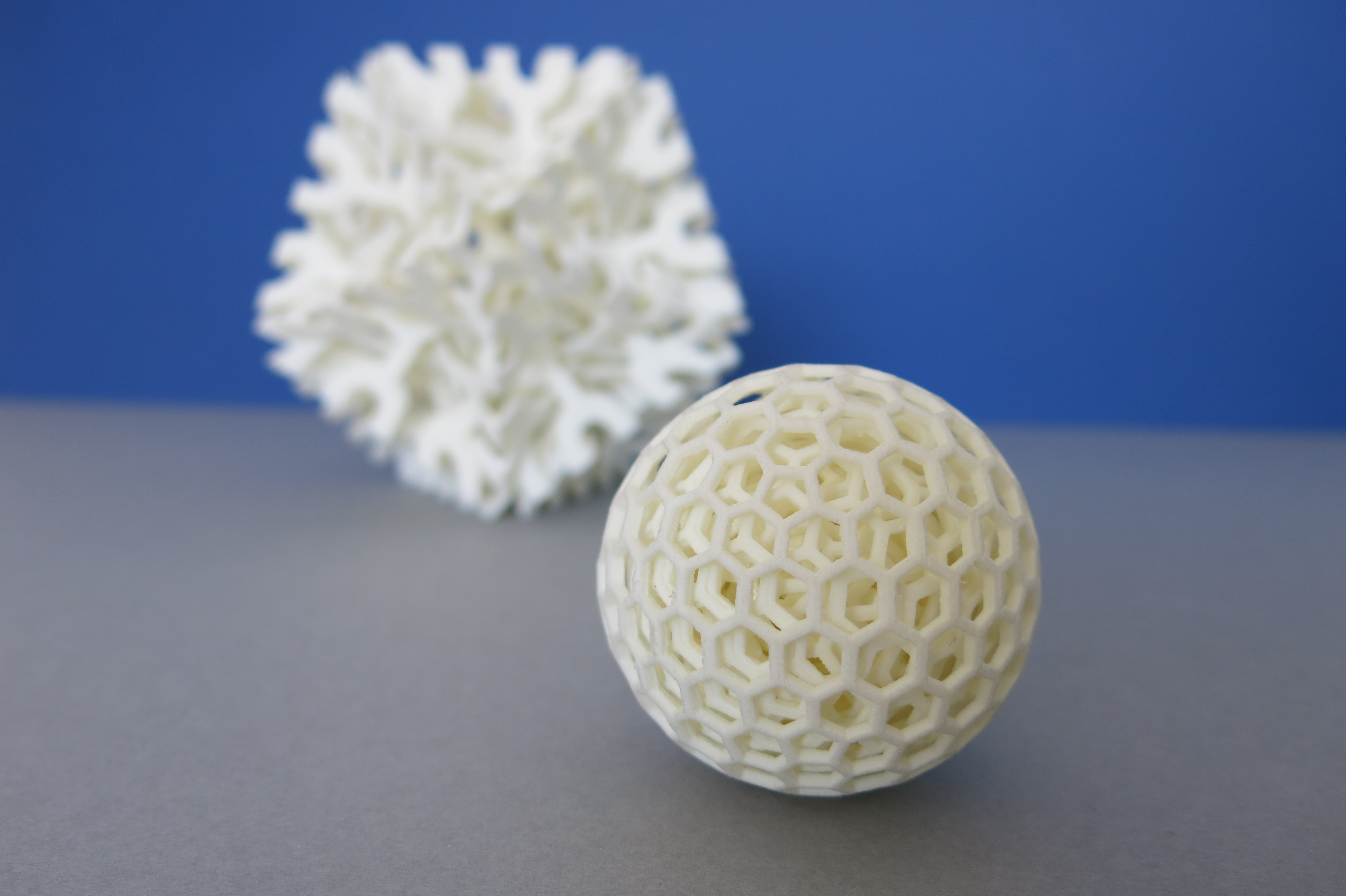 Let your imagination decide what the next 3D-printed mathematical object will be!