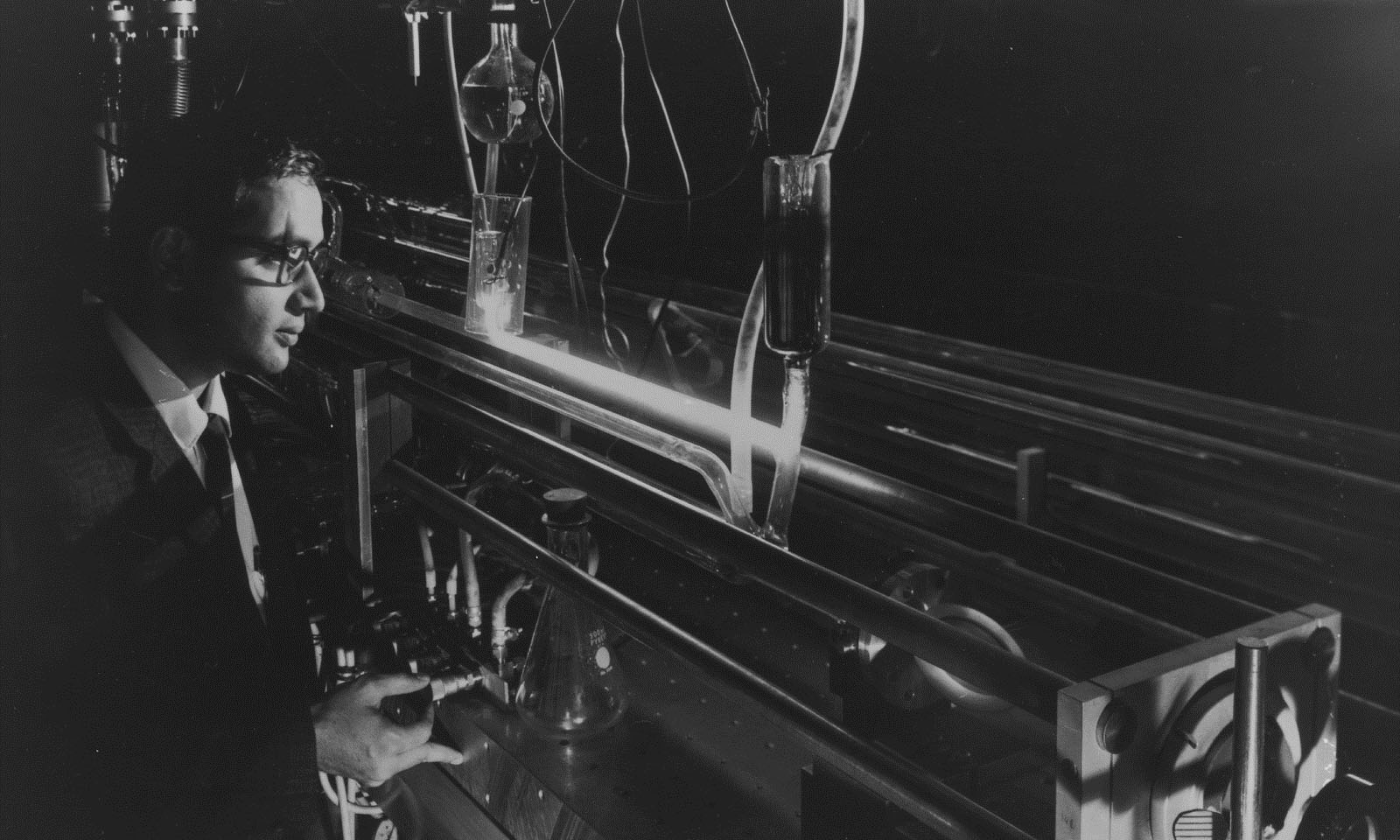 From the first lasers (and their ancestors the MASERs) to today’s laser cutting, there’s quite an interesting history of trials and errors, dismissal and discoveries. To understand a bit better what’s behind our new laser cutting service, take this historical journey with us.

This article is directly inspired from our latest ebook, The Ultimate Laser Cutting Guide. If you want to know more about laser cutting, download it for free!

1. Lasers before laser cutting: How was the first laser invented?

a) From MASERs to LASERs

During World War II, the physicist Charles Townes worked at the Bell Laboratories on the radar assisted bombing systems and microwaves generators. In the 50’s, following an Einstein theory, stimulated emission, where energy is extracted from a transition in an atom or molecule, Townes thought about creating a photon flux, all alike, thanks to the amplification of a magnetic wave. That’s how he created the first device, called Microwaves Amplification by Stimulated Emission of Radiation, i.e. “MASER”. Masers were modestly useful, for scientific research mainly but not so much for military or industrial applications. Only a few scientists thought an infrared maser might be important. 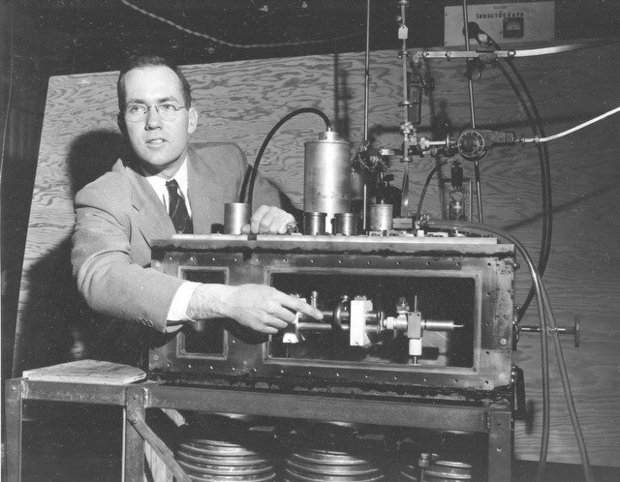 Moreover, infrared rays could not be manipulated like radar, and were hard to manage at all. Yet, Townes thought about this idea intensively. And in 1957, studying the equations for amplifying radiation, he realized that it would be easier to make it happen with very short waves than with far-infrared waves.

He associated Arthur Schwalow, his friend and brother-in-law to his research, and Schawlow brought the solution: put the atoms you wanted to stimulate in a long, narrow cavity with mirrors at each end. The rays would shuttle back and forth inside so that atoms would be likelier to radiate. One of the mirrors would be only partly silvered so that some of the rays could leak out. This optical resonator, which amplifies light, is later improved upon by Gordon Gould, a graduate student at Columbia University. He calls it a LASER for “Light Amplification by Stimulated Emission of Radiation”.

Even though Gould, Schawlow and Townes understood the principles of building a laser, none of them managed to build the first working prototype. In 1960, Thomas Maiman brought to life Townes’ dream and made the first synthetic ruby laser, producing a perfectly straight red laser beam.

2. The development of Laser Cutting

a) More powerful and efficient: Invention of the CO2 laser cutter

Kumar Patel and one of the first CO2 laser cutters

In 1963, Kumar Patel, at the Bell Labs, develops the first Carbon Dioxide (CO2) laser. It is less costly and more efficient than the ruby laser, which has since made it the most popular industrial laser type – and it is the type of laser we use for our online laser cutting service. By 1967, CO2 lasers with power exceeding 1,000 watts were possible.

Watch Kumar Patel talk about the invention of CO2 lasers:

Peter Houldcroft, the Deputy Scientific Director at The Welding Institute, in Cambridge, pushed it further in 1967, when he used a laser cutting nozzle, with an oxygen pressure chamber which provides an assistant gas stream in the region of the laser beam focus, to cut through a sheet of steel 1 mm thick. This was the first commercial application of laser cutting.

‘With the development of higher power lasers it should be possible to cut thicker and different materials including non metals. The narrowness of the cut promises a precision not previously obtained with thermal cutting techniques.’

b) The uses of laser cutting, then and now

The Western Engineering Research Center, in Buffalo, USA, was the very first one to employ a laser as a cutting device. At this time, diamond dies were used to manufacture wire for electrical connections. Thousand of dies were required for this kind of operations, and piercing the dies or resizing them was both a costly and a slow process, up to 24 hours of making.

Instead of metal drill or diamond dust, used so far, engineers used a laser. Many of the conducted tests were safety-testing. The effects of laser beams on eyes and skin, or of the vaporized materials on the worker’s health had not yet been established.

1969: First industrial use in Boeing factories

The American company Boeing is the first one to integrate laser-cutting on its production lines. In August 1969, three employees from the Boeing Company produced a paper on the CO2 laser cutting off “hard” materials – titanium, Hastelloy and ceramic – using the assist gas technique. They concluded that the laser “could be an effective and economical cutting tool, but a great deal of research and development may be required before such a machine could be put on the production line”. In the 1970’s, Boeing patented the multi-beams laser-cutting and was among the pioneering companies cutting titanium with a laser.

Forty years after the first CO2 laser cutter, laser-cutting is everywhere! And it’s not only for metals anymore: acrylic, wood (plywood, MDF,…), paper, cardboard, textile, ceramic. Lasers now have good-quality and high-precision beams which can cut through materials thick up to 20 mm, with a clean and narrow kerf, and no need to resize or polish the material.

Industry stays the biggest buyer. Automobile companies especially, but lasers are also employed to create solar panels by cutting photovoltaic cells in silicon slabs, or to drill holes in the blades of turbines in order to cool aerospace constructions. Engraving objects, for example letters on keyboards, the brand on the side of your phone or your pen, is also a frequent use for lasers. Paired with 3D-print, laser-cut opens up the field of possibilities in industry! 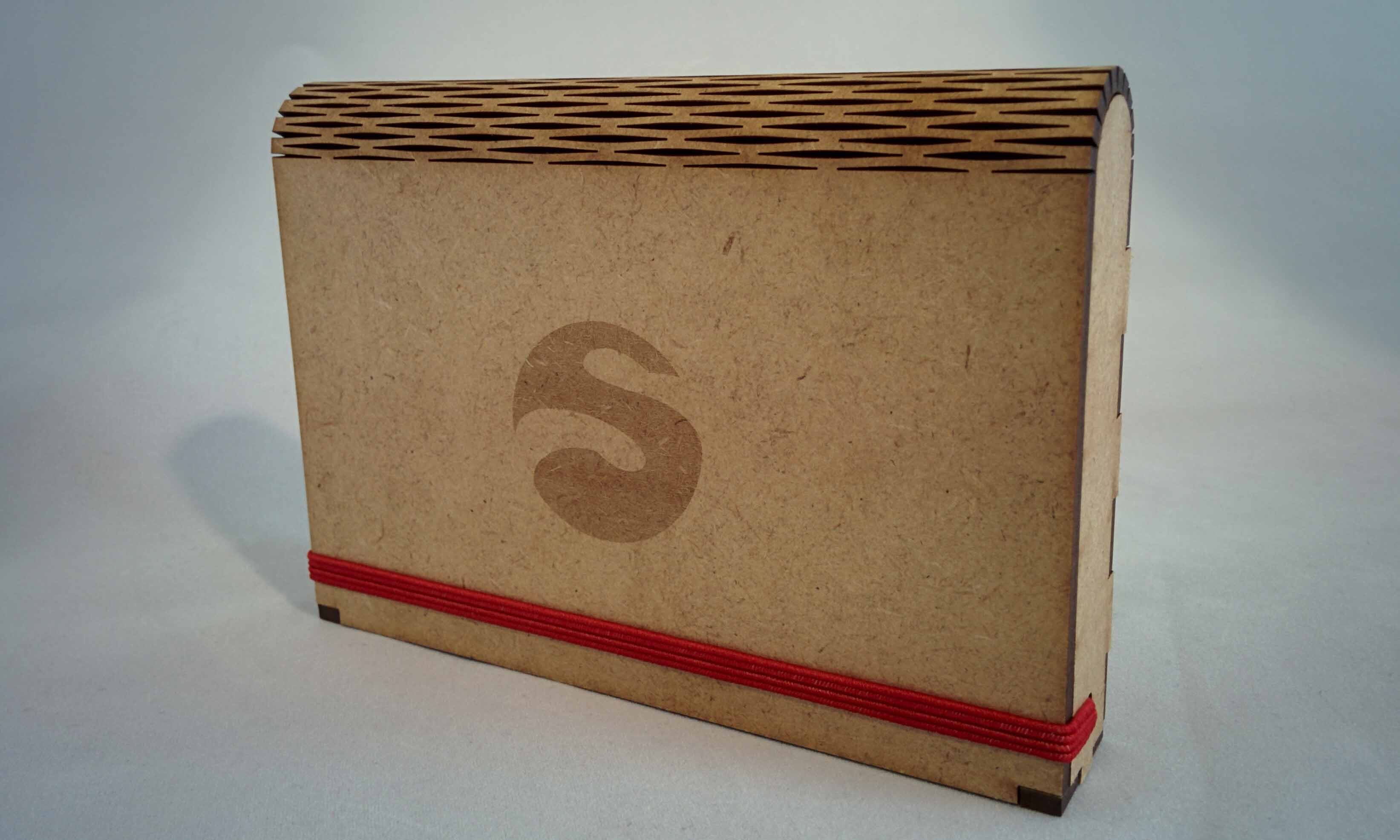 And… laser cutting is available as a service, online, in only a few clicks, anyone with an internet connection can now benefit from this technology.

This article was directly inspired from our latest ebook, The Ultimate Laser Cutting Guide. If you want to know more about laser cutting, download it for free!

If this history of laser cutting has made you curious of what is possible thanks to this technology, you can check out our materials catalogue – for now, we offer 4 main materials (acrylic, plywood, MDF, cardboard) with more than 60 combinations of types, thicknesses, and colors – and upload a 2D file to get a free quote for your laser cutting project!