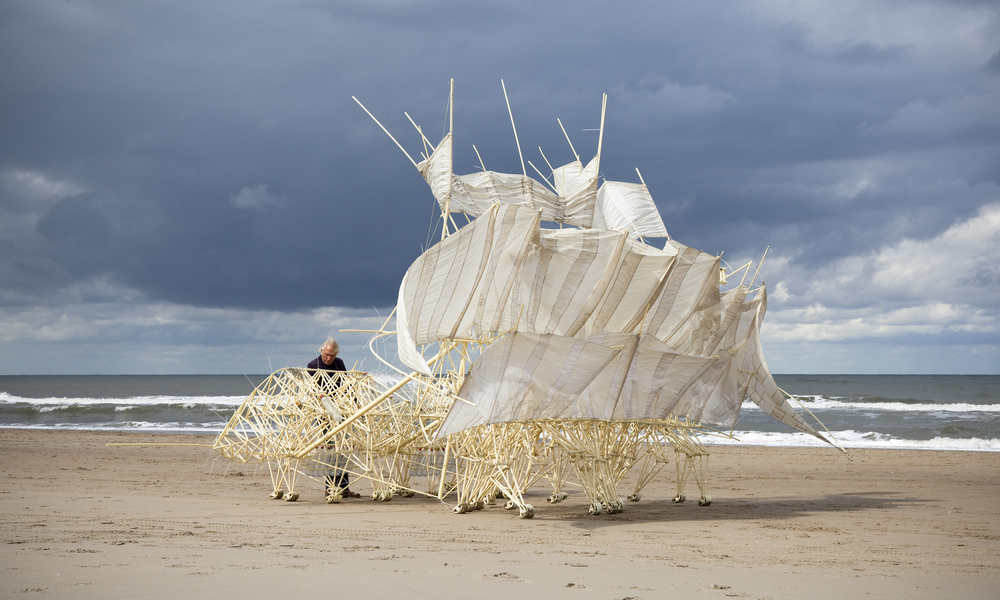 3D printed robot: How to build a Strandbeest

Last week, one of our customers, Nicolas Raynaud, went viral on Reddit, posting a gif of the 3D printed robot he made thanks to Sculpteo. He designed a robot, after Theo Jansen’s Strandbeest mechanism. What is it? How to build a Strandbeest thanks to 3D printing? What are our best tips to succeed in creating your own walking device? Discover it right now!

Nicolas Raynaud, one of Sculpteo’s customers, posted this gif on Twitter last week, which went viral.

Why has it been such a success? The way this 3D printed robot walks is hypnotic due to its amazing smoothness. Nicolas Raynaud based himself on Theo Jansen’s Strandbeest mechanism. He designed the CAD models of this walking device on his own, using Fusion 360. Discover our tutorial to learn more about how to design with Fusion 360. He also uploaded its Strandbeest models on Thingiverse.

But now, discover how he succeeded in creating this smooth walking movement thanks to Theo Jansen’s Strandbeest, which helped him build this amazing 3D printed robot.

Theo Jansen is a Dutch artist and kinetic sculptor. In the early 1990’s, he started creating large mechanisms in PVC which can move on their own due to the wind only, and which seem to walk. These structures are called Strandbeest, which comes from ‘Strand’ meaning ‘beach’ and ‘beest’ meaning ‘beast’. So a Strandbeest could be called a beach animal.

The work of Theo Jansen is a real fusion between art and engineering. Here’s what the Dutch artist says about this:

“The walls between art and engineering exist only in our minds.”

He now even tries to equip his structures with Artificial Intelligence so that they can be fully autonomous and avoid obstacles on their own. For instance, if a Strandbeest enters the water, it can detect it and it moves away from it right away.

This work has been exhibited for instance at the Peabody Essex Museum.

Theo Jansen’s linkage: How does the Strandbeest mechanism work?

To create its Strandbeest, Theo Jansen designed a whole mechanism, known as Jansen’s linkage. It’s made in order to create a smooth walking motion, without the classic sharp movements of usual robots.

To make one of these walking devices, you need to design tubes – the Dutch artist used PVC pipes – which respect the following proportions and to insert a rotation mechanism in the blue part. It took many months of research for the Dutch artist to find these precise ratios, but finally, he succeeded using an algorithm which came out with these numbers. 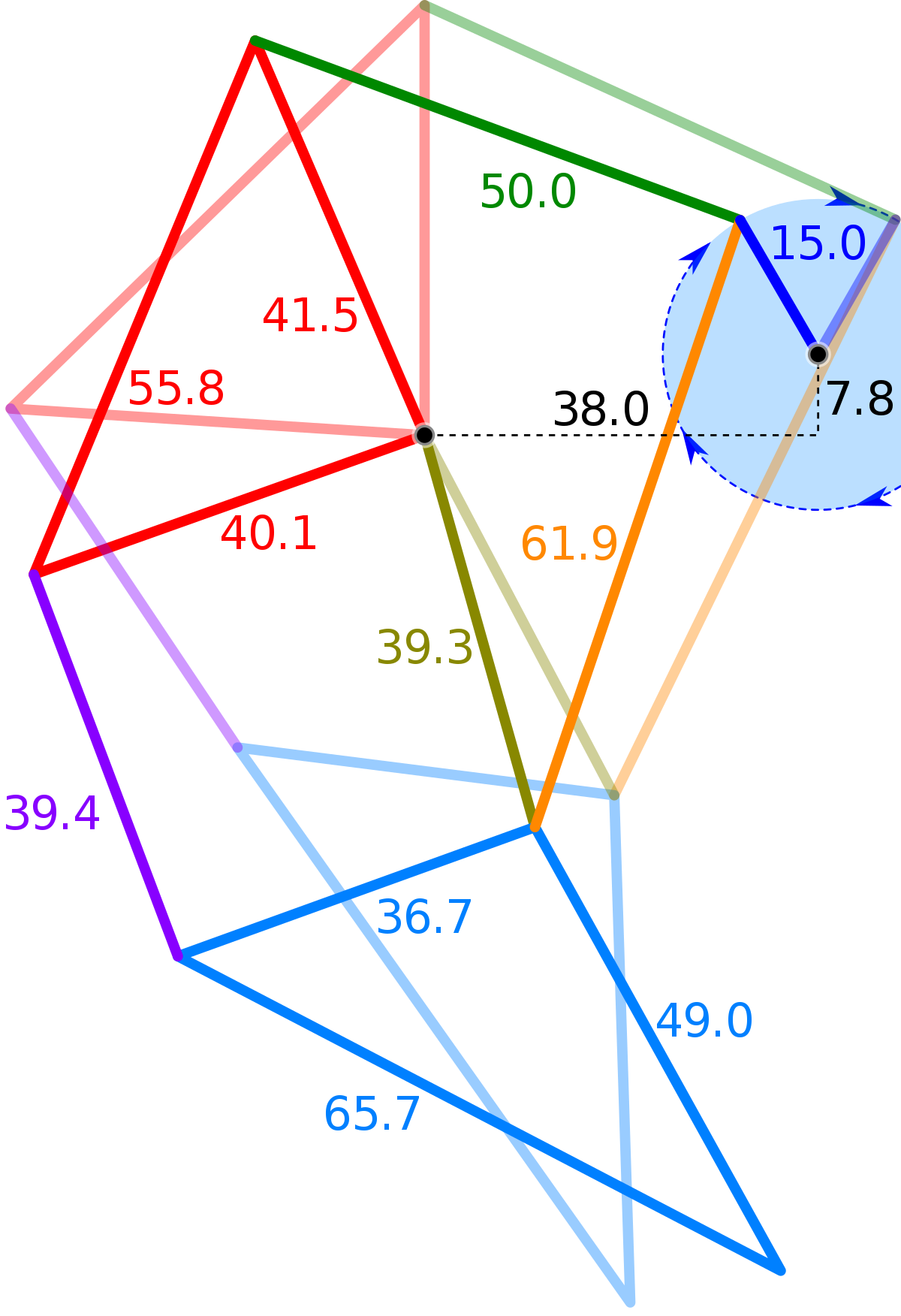 To ensure stability, Theo Jansen started designing wider structures, with a larger number of legs. Moreover, he started inserting tubes parallel to the ground, which are like the spinal cord of the Strandbeest. Thus, you should think of these rules if you want to build your own Strandbeest.

Theo Jansen’s linkage can be used on its own to create structures that will move with the wind, but you can use it for other kinds of uses. Indeed, it’s used a lot in the making of 3D printed robots to create a smooth walking movement instead of the classic robotic movement.

As you already foresaw, it’s totally possible to build a 3D printed robot thanks to this Strandbeest walking mechanism. We already told you where you could find Nicolas Raynaud’s Strandbeest model, but you might want to try to build this 3D printed robot on your own. It can be quite difficult due to the many technical constraints, but here are our best tips on how to build a Strandbeest!

Find the right motor for your Strandbeest

Since there won’t necessarily be wind around you all the time to make your Strandbeest move, we advise you to make it a 3D printing robot. Indeed, Theo Jansen’s linkage can be used to create robots with a smooth walk, as Nicolas Raynaud did. But finding the right motor is not an easy task, due to the fragility of a Strandbeest structure. If it’s not powerful enough, your structure will not move. If it’s too powerful, it will break your creation.

Also, to make sure that your Strandbeest walks, you need to find a way to transmit the movement coming from the motor. We recommend you to use a gear mechanism. You can even design your gears using laser cutting, discover our tutorial now!

The weight of each part of this 3D printed robot is essential. As a result, you need to find the right material for your need. We strongly recommend choosing a light material that will respect these constraints. Indeed, if it’s too heavy, the movement of your 3D printed robot will not be as smooth as expected.

At Sculpteo, we offer a wide range of materials, from plastics to metal. Looking for lightweight options? No problem, discover our PA12 plastic! That’s the material that has been used by Nicolas Raynaud in order to build his Strandbeest 3D printed robot.

It can take many many iterations before getting the right Strandbeest. One of the main challenges you face is finding stability. How many legs should you make? It’s hard to know before trying to assemble your final structure.

Leg linkage is key. The assemblies of each tube should be robust but flexible at the same time to ensure a smooth movement. Also, the camshaft assemblies parts are key. They shall really be well proportioned and properly aligned to equilibrate the whole structure. A good solution to these issues can be to use spacers inside of the leg joints to widen them without adding a lot of weight.

Using Jansen’s mechanism, there are many potential friction areas due to the fragility of the structure and of its ongoing movement. Indeed, each leg has 7 individual joints that are both applying force against each other. If friction is too important, your 3D printed robot could break.

To deal with this issue, you can use ball bearing inside your joints, or substitute them with Teflon washers.

Looking for some CAD design tutorials? Discover our now, either on Fusion 360, or on Inspire, and FreeCAD.