Young’s Modulus and Tensile Strength: All you need to know

When designing a technical piece, you need to know the properties of the material you are going to use in order to know how it will behave, and to prevent any ruptures or breaks. Several physical entities can be used to do so, and the most common ones are Young’s modulus, or modulus of elasticity, and ultimate strength, to understand how the material reacts under tension or compression . These characteristics are often given by raw material providers, however they heavily depend on the production process you are going to use. This is why the Sculpteo team conducted its own tests in order to bring you the most exhaustive results about materials properties.

In this blog post, we are going to focus on Young’s modulus, but keep in mind that there are also other elastic moduli, such as shear modulus, bulk modulus or Poisson’s ratio.

What is Young’s modulus?

Young’s modulus, also known as the tensile modulus, elastic modulus or traction modulus (measured in Pa, which is a pressure unit(N.m^-2; 10MPa is equivalent to 1Kg  force per square millimeter) is a mechanical property of linear elastic materials. It,  evaluates the elasticity of rigid or solid materials, which is the relation between the deformation of a material and the power needed to deform it. For example, a stiff material needs more force to deform compared to a soft material. Rubber has a 1MPa modulus, and iron has a 200GPa modulus (200.000 times more). For the same force applied to a sample with the same thickness, the rubber samples will extend 200.000 times more.
The deformation of a physical object depends first of all on the design geometry. Indeed, it’s easy to understand that a thick piece is harder to deform than a thin one.

The relation between force and deformation is the following :

Where:
-Epsilon is the  elongation (Length / original  Length) no unit
–Sigma is the stress in PA or PSI
– F is the force in N or lbf
– s is the transverse section in m² or in²

What is tensile strength?

Tensile strength is the value of the maximum stress that a material can handle. This is the limit between plasticity zone and rupture zone.
It’s important to notice the difference between resistance and elasticity.
A rubber band is easier to deform that a spaghetti but it’s harder to break.

What is elongation at break ?

There are mainly 3 types of behavior for a material, depending (among other variables) on the strength you use to deform it. Each of these behaviors are separated by yield points on the engineering stress-strain curve: 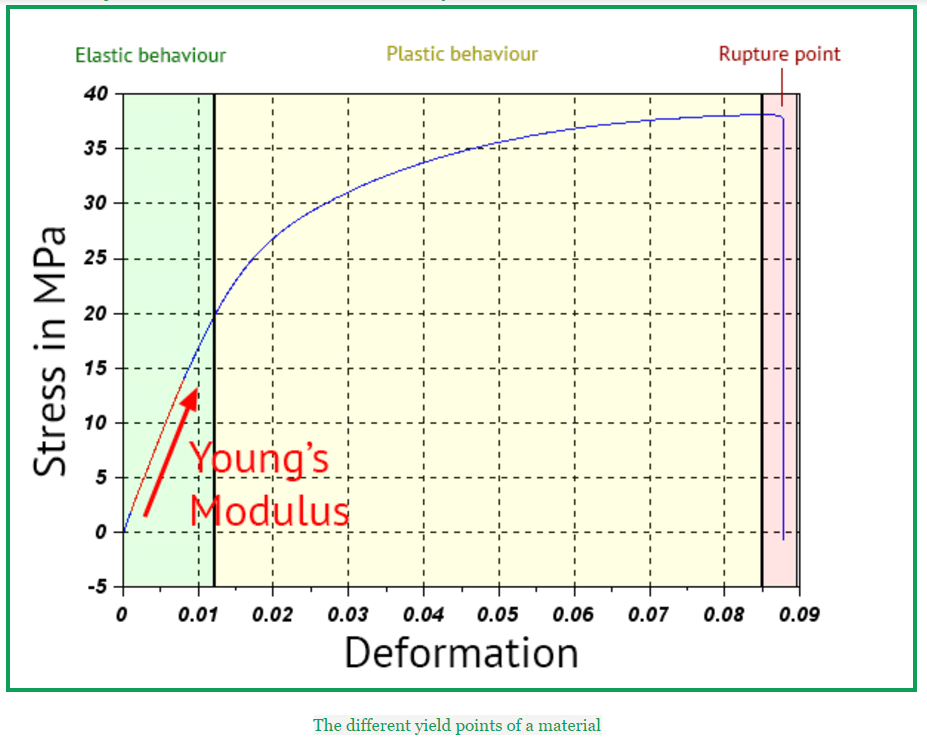 What is a tensile test?

A tensile test is an experimental measure, where you try to elongate an object, while measuring the strength you are using to do so. The elongation process is made with a constant speed, until we reach the breaking point. This gives us everything we need to draw a force curve based on the elongation. Thanks to those values, we are then able to deduce the elasticity modulus of the material, and its elongation at the rupture point.

In order to ensure that our results are pertinent we have been following the recommendations of normatives agencies for plastic injection since 3D printing norms have not been developed yet (ISO 527-2 1BA). Theses specimens have bigger extremities to ensure that the maximal stress and strain will be concentrated in the central part. Each test has been performed on at least 5 specimens. 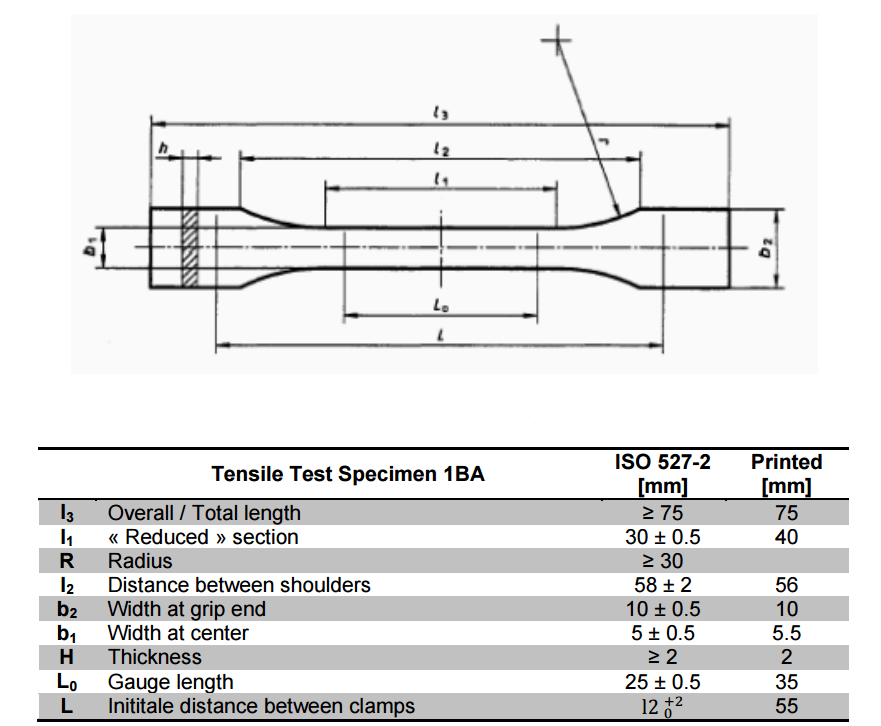 Our white plastic objects are made thanks to Laser Sintering, layer by layer, which means that the properties of our material are not the same in every directions. That is what we call an anisotropic material. Indeed, cohesion between two layers is weaker than between the grains of powder of a same layer. When pulled perpendicularly, the material yields more easily than in the direction of the layers. We get on average: Effects of dyeing Dyeing is a treatment wherein our plastic is dipped in a dyeing bath at an elevated temperature, which may change the properties of the material. However, the changes seem minor if we look at the results, and the data from the white PA can be used as reference. Effects of our Smoothing Beautifier process Smoothing Beautifier is a physicochemical process that modifies the surface properties of the plastic to give it a shiny appearance. It seems reasonable to verify that this treatment does not alter the properties of PA12 too. In practice, we have observed that the treated surface is more brittle, but with thicknesses of more than 2mm, the properties of the white plastic remain unchanged.

Black plastic is produced the same way we create white plastic, but the material is a bit different. Black plastic as a whole is more flexible than white plastic. We should thus get different modulus, depending on the direction of the traction. We get on average:

Flexible plastic is, as its name states it, an extremely flexible material. However, we can realize that the TPU almost doesn’t have any linear behavior, hence why we prefer not to make any statement on its Young’s modulus. Nevertheless, we get in average:

Theses materials are Nylon based composites with reinforcements. They are added in order to make the material more lightweight or stronger.

Alumide is plastic reinforced with aluminium powder. It’s more lightweight and more isotropic. Moreover, it gives a colorful mottled aspect. Alumide has a great elastic domain and a short plastic zone. The rupture mode is brittle.

GF Nylon is a Nylon based material reinforced with microscopic glass balls, it makes the structure stronger in the layer orientation but more breakable in the perpendicular direction. It’s brittle on z direction and plastic in x,y direction.

Carbonmide is a Nylon based composite reinforced with short carbon fibers. The fiber geometry of the reinforcements give it particularly good mechanical properties in the x,y dimensions. Yet, in the other directions the properties are deprecated. These tests gave us good estimations of the properties of the materials produced by Sculpteo. Furthermore, they are coherent with the data you can find in scientific reports. However, these results are only indicative, and it is still better to prototype an object to be sure of its reliability. There are other types of modulus of elasticity such as bulk modulus, shear modulus or Poisson’s ratio, that actually require the use of additional elastic properties.