3D scanning is becoming more and more popular. From the medical industry, historical reconstructions to automotive applications, 3D scanning has many uses. But which software is the best for your project? Did you know that in some cases all you need is a phone? Let’s see which option will suit you best!

How does 3D scanning work?

We already wrote an article about how 3D scanning works, so dig into it if you would like to know all the details! In a nutshell, 3D scanning allows you to produce a 3D model of a physical object. 3D scanning is a technology that’s now available for everyone. Doctors and other professionals use 3D scanners at work, but they are also widely used by commercial companies and amateurs.

3DF Zephyr is one of the leaders on the market thanks to its UI. It is very intuitive and user-friendly. Inexperienced users will be guided through the 3D scanning process, however, 3DF Zephyr is not only for amateurs. Professionals from different fields will use a lot of helpful tools, such as the ability to transform the model into CAD software. There are also plenty of options to tweak the 3D model and adjust it.

This professional 3D scanning software is popular for GIS applications (Geographic Information System), but also for visual effects production, historical documentation and game development. The software is capable of working with both close-range and aerial photogrammetry. An interesting feature of Agisoft Metashape is that the user can make 4D models as the software allows to save whole scenes as editable 3D objects 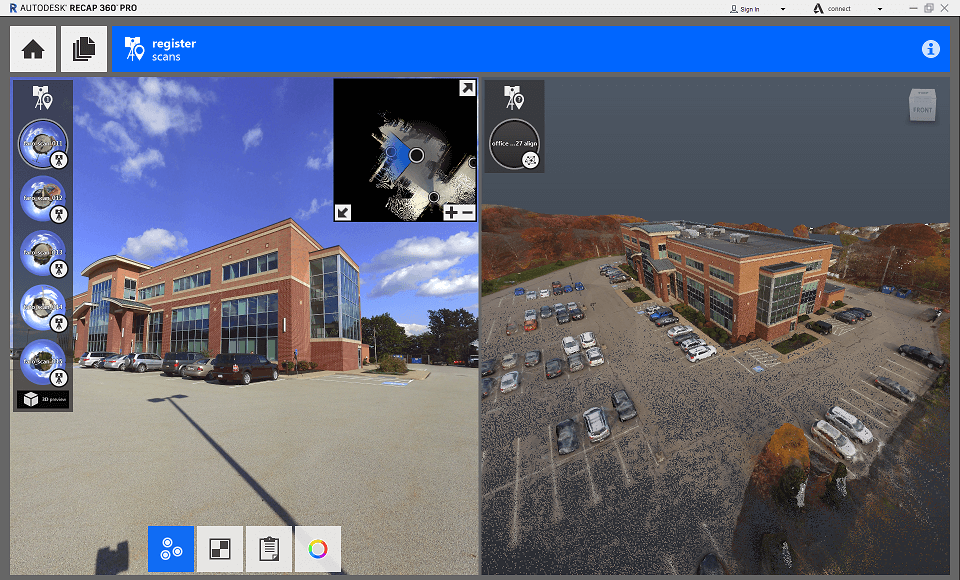 Autodesk ReCap stands for Reality Capture. It uses photos, but can also apply laser scans to produce 3D models. It can be used for aerial scans and close-range. The 3D objects can be used with CAD and BIM software. With this 3D scanning software, you will be able to achieve high-quality models, which can be edited thanks to specialized tools.

This is a very powerful professional photogrammetry software, capable of producing whole infrastructure landscapes. It will give you a lot of advanced tools to organize and edit the 3D models. This software is popular for construction projects, it can create highly detailed street views This software can be with aerial photogrammetry and laser scanning in order to achieve the best 3D models. With Bentley ContextCapture you can even produce 3D animations and fly-throughs.

Colmap allows for the production of 3D mesh from one camera or from a set up of cameras. It is free and easy to use. There are more advanced options available, especially to improve quality. However, you can’t edit the 3D model in this software. It is great for quick and easy 3D scanning.

As the name suggests, this 3D scanning software was designed for drones. It consists of two apps. One controls the path of the drone and will guide it from take-off to landing. A second program gathers the photos and creates a 3D model. It provides you with tools to measure areas, volumes, and distances. Additionally, you can add more personalized features.

IMAGINE is a professional photogrammetry software. It is important for you to consider if you’re planning to work with mapping 3D scans. It is very well known in the industry and used by the department of transportation, commercial mapping companies, and national and regional mapping authorities. It provides users with plenty of professional tools such as different point cloud views, to help transform the photos and manage large data.

Meshroom stands out for an easy learning curve. The 3D scanning process is very intuitive, and based on nodes and creates a 3D model for you. You also have the option to edit the nodes later and adjust the 3D scan according to your needs.

Yet another 3D scanning software for professionals. It is trusted by computer-vision scientists and the Multiple View Geometry (MVG) industry. OpenMVG operates with Structure from Motion (SfM) photogrammetry technology.

Photomodeller allows you to create 3D objects thanks to 3 different methods. You can manually fit common characteristics, automatically produce a 3D model from coded targets or match point clouds from overlapping images. It is an easy to use and affordable 3D scanning software.

This 3D scanning software covers all the tools from flying a drone to generating a 3D model. It will assure your drone path is correct and then allows you to create orthomosaics, index maps, elevation models or point clouds to produce an accurate 3D model. You also have access to different analytic tools so the model can be edited.

Other than producing 3D models from pictures, it is also possible to use laser and structured light projections to generate a model. When it comes to this type of 3D scanning software, it often comes with 3D scanning hardware, such as a 3D laser scanner, as with these technologies you can’t just use your phone to make a 3D model.

Certainly one of the leaders in the 3D scanning software industry. It offers a professional set of tools and innovative algorithms to calculate the gathered 3D data and provide you with the best results. Another great feature of Artec is its user-friendliness and intuitive UI.

Used by ShapeGrabber 3D Scanners and developed by Innovmetric, PolyWorks analyzes the 3D model for quality and accuracy. It is used by professionals in the aerospace, medical, automotive and other industries. It allows you to check the generated model by processing the point cloud.

Widely trusted in the automotive and electronics industries 3D scanning software. It allows you to analyze and visualize 3D data for metrology purposes, quality control, product development, and damage analysis.

This cutting-edge technology of 3D scanning has gone so far that you can even use your phone to both make a 3D scan and then a 3D model. There are dedicated apps that will allow you to turn a real object into a 3D model in just a few clicks. Learn how to 3D scan with a smartphone

This is all-in-one mobile 3D scanning software. Qlone will allow you to 3D scan and produce a 3D model with just your smartphone. It’s easy and fast to use. The 3D model can be exported into several 3D formats and sent for 3D printing.

Trnio can be considered as photogrammetry software but can be used on a smartphone. It turns pictures into 3D objects, but you can also actually 3D scan the object. It offers two quality options: high and low texturing resolution.

If you need to get high resolution models using a 3D scan app on your smartphone, this Sony 3D Creator app could totally fit your needs. This free app is perfectly adapted to beginners, allowing you to render your 3D model in 4K for a better resolution.

Heges is a scanning app for iPhone, targeting professional users. This program has many interesting features: it performs 360° rotation, it includes “Infinity scanning” for large spaces. You can also make the most of its dark mode allowing you to scan in dark environment!

Yet another photogrammetry software. It has a very simple UI and is user-friendly. Take 20-40 pictures in order to generate a 3D model. It can work with small objects as well as bigger objects (such as a tree). You can export your model as an STL file, one of the most popular formats for 3D printing.

This mobile app was developed by Sony and will provide you with high-quality 3D scans, it’s especially popular for portraits. The models can be used within different apps such as messages, but also to 3D print models in full color.

Let’s have a quick recap of all these software. We will list the most important technical parameters which hopefully will let you decide which 3D scanning software is the best for your project.

As you can see the list of Top 3D scanning software is long and for sure one of them will fit your needs. From professional landscape mapping to medical 3D scanning, this technology amazes us. But it can also be used at your home, all you need is a phone.

3D printing can be just as easy. All you need to do is to upload your 3D objects to our online Additive Manufacturing service. 3D printing has never been more simple!