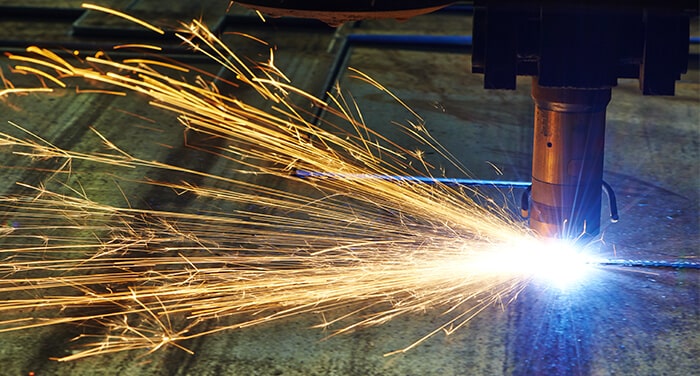 Plasma Cutting is a technology used to cut through conductive materials. It uses gas and electricity to cut through a different number of components, whether it is brass, copper, aluminum or steel.

Plasma is one of the four fundamental states of matter, the others being solid, liquid, and gas. Plasma differs itself from gas through ionized particles, meaning that it is made up of groups of positively and negatively charged particles. Plasma cutters use this state to cut through conductive materials as the heat levels generated can go up to an excess of 20 000°C and the velocity of the plasma emanating from the nozzle can approach the speed of sound.

Plasma, in the process of plasma cutting, is obtained by forcing a compressed gas through a small nozzle orifice inside the torch. The plasma gases typically used are oxygen, air, argon, hydrogen, nitrogen or mixtures. As this high pressured gas flows down the nozzle, it is subjected to an electric arc. That arc jumps from an electrode in the torch to something else which is usually the conductive material being cut. The arc ionizes the gas and a conductive channel of plasma is generated, commonly referred to as a “plasma jet”. The plasma jet immediately reaches temperatures up to 20 000°C and the high velocity plasma and compressed gas blow the hot molten metal away, thereby cutting through the materials.

There are a different number of variations of plasma cutting, which have been designed to improve cut quality and arc stability, reduce the noise and fume or to increase cutting speed. Those variations play on the number of gases used, on the use of water, etc. Plasma cutting can even be combined with waterjet or oxy-fuel cutting.

Plasma cutting has many benefits, which has made it an attractive application in many different industries:

However, plasma cutting does have some drawbacks. The major drawback is that non-conductive materials such as wood or plastic cannot be cut with plasma cutters. Furthermore, plasma cutting is limited on the thickness of the plates to cut, which can go up to 160 mm for dry cutting and 120 mm for cutting under water.  Last but not least, the cutter’s electrode and nozzle require frequent replacement which adds to the cost of operation.

Plasma Cutting is a great tool to use on conductive materials, such as brass, copper, aluminum or steel, which explains why it is often used in fabrication, welding shops, automotive repair and restoration, industrial construction, salvage and scrapping operations.