3D printing makes it to the kitchen 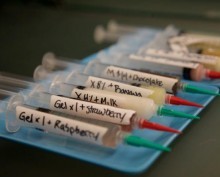 The team at Cornell University’s Computational Synthesis Lab (CCSL) are building a 3D food printer, as part of the bigger Fab@home project.

This new type of printer will perhaps one day sit alongside your blender or microwave oven. Just pop liquid food instead of ink. Load the recipe – or ‘FabApp’ – and the machine will do the rest.

People lacking even basic culinary skills could download the recipe files of master chefs or print out nutrition-packed dishes recommended by their doctors.

And it would have the added benefit of cutting out some of the waste of current food production methods, says Homaro Cantu, chef and owner of the Moto Restaurant in Chicago, Illinois, who has printed sushi using an ink jet printer.

“Imagine being able to essentially ‘grow’, ‘cook’ or prepare foods without the negative industrial impact – everything from fertilizers to saute pans and even packaging,” he says. “The production chain requirements for food would nearly be eliminated.” Local food could really mean local.

The Fab@home team is actively working on creating a syringe-based 3D printer. The current design is basically a series of syringes that deposits liquid food layer by layer.

“In the future there would probably be a kind of ‘ChefCAD’ that will allow people to design their own food constructions,” said Professor Hod Lipson, Director of CCSL. “You’d hit the print button and it would ask you how many copies”.

The raw materials used to print the food are currently limited to anything that can be extruded from a syringe. Commonly they are liquid or melted versions of chocolate, cookie dough, cheese, or cake batter. However, the team are now experimenting with mixing foods with hydrocolloids – substances that form gels with water, generally used to thicken food products – and are also studying the possibility for people to create their own inks,