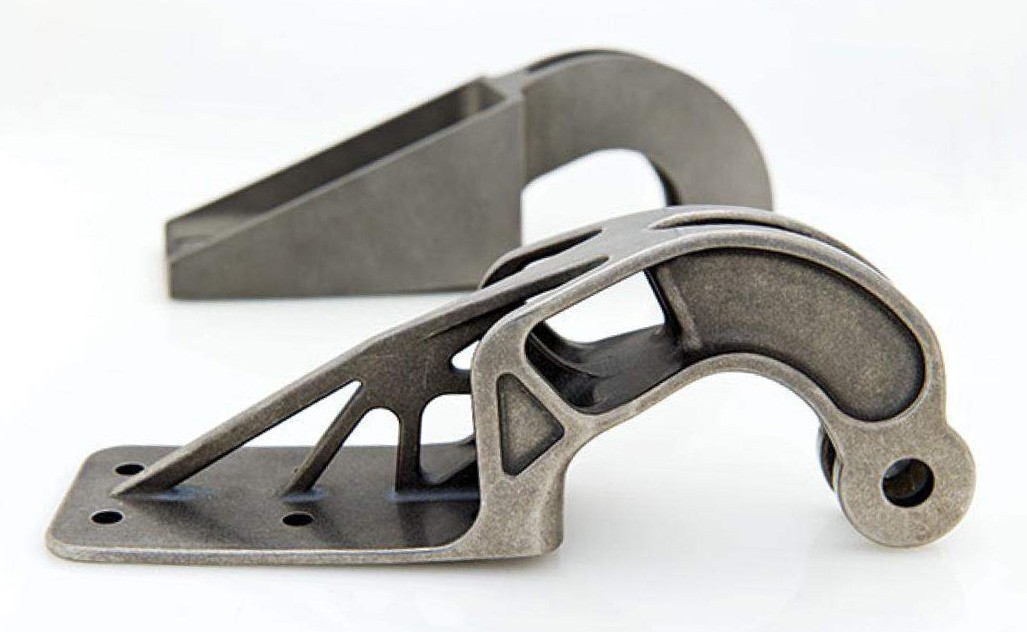 Back with a new delivery from our How 3D Printing will revolutionize your industry series, this week we are going to show you how 3D printing is changing several industries that develop mechanical systems for a wide range of applications, from hi-tech bikes to spacecrafts.

It has been a relatively long time by now since computers took over a large portion of the work necessary to create sophisticated mechanical systems, from the early stages of designing and modelling, to advanced field-specific analysis and numerical simulations of the system being developed. Back in the times of that transition to a digitalized environment, we witnessed a tremendous increase in speed as more and more formerly manual tasks were verted into computer code. Unfortunately, we haven’t had another game-changing technology that offers us a similar speed increase and empowers us with new capabilities again like computers did back then.
Until now… 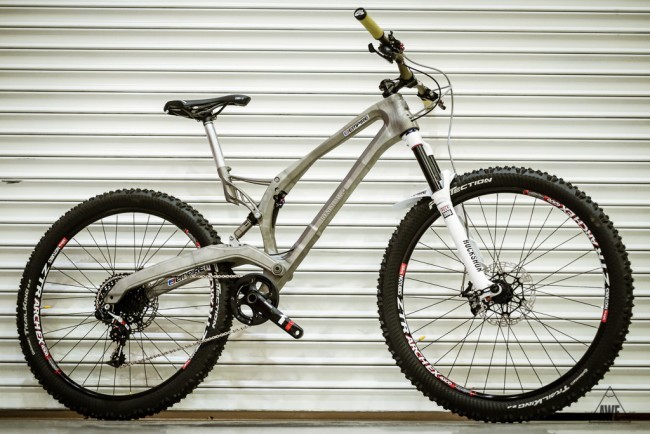 Despite the fact that metal 3D printing technologies have been around for a while, it is fairly safe to say that until recently they were only affordable by a select group of hi-tech and big-budget industries, mostly related with either aeronautics or space. Luckily for everyone else, in recent years a number of [relatively] affordable additive manufacturing systems and services stepped into the picture allowing smaller industries to take advantage of it for all kinds of applications. Just as those big industries do, smaller players seek to profit mostly in four closely related areas:

Both Rapid Prototyping and Final Product purposes are pretty self-explanatory and widespread uses of additive manufacturing technologies but the latter two could be considered more specific to mechanical systems so let’s focus a bit more on them.

Topology optimization is a mathematical approach that optimizes material layout within a given design space, for a given set of loads and boundary conditions. This basically means finding the most material-efficient shape to satisfy the set of requirements for the part being designed. This idea is hardly new, but 3D printing made it a lot more appealing because before additive manufacturing was available, the frequently complex shapes that maximize efficiency were extremely difficult if not virtually impossible to manufacture. Needless to say, less material means lighter parts, more efficient machines, improved performance and material cost savings. 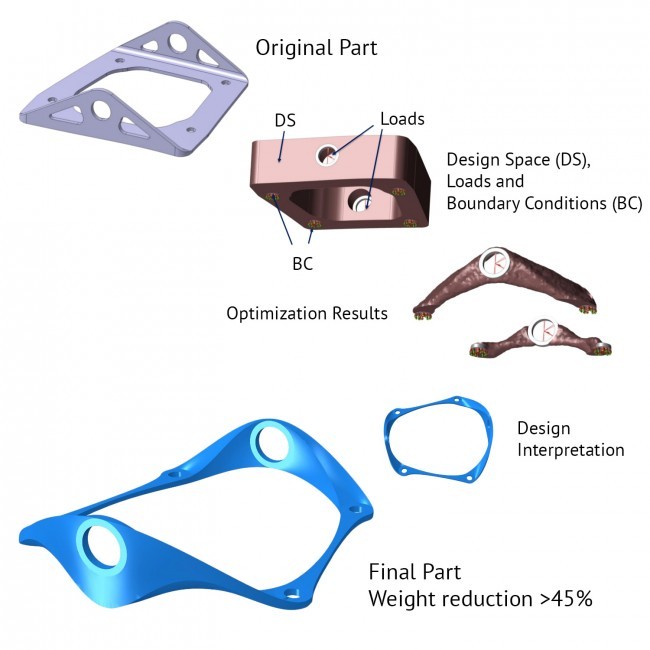 All images courtesy of EADS APWorks 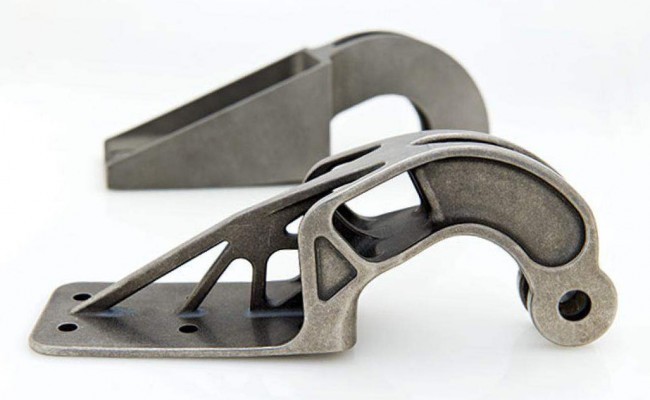 No-Assembly Design means minimizing to the greatest extent possible the number of parts composing an object. The premise is that if two sections of a product can be of the same material they should be combined. This procedure reduces the material otherwise used in junctures and connectors, overall weight, design time and assembly time (ideally down to zero) while simultaneously increasing strength and reducing potential failure points. Just as with Topology Optimization, this concept often leads to shapes too complex to be manufactured with traditional methods and became feasible with additive manufacturing technologies.

Needless to say, there exist some constraints in this approach, like the simple fact that a one-piece object footprint is likely to be bigger than its constitutive parts, potentially exceeding the printer’s capacity and forcing a multi-piece object anyway. 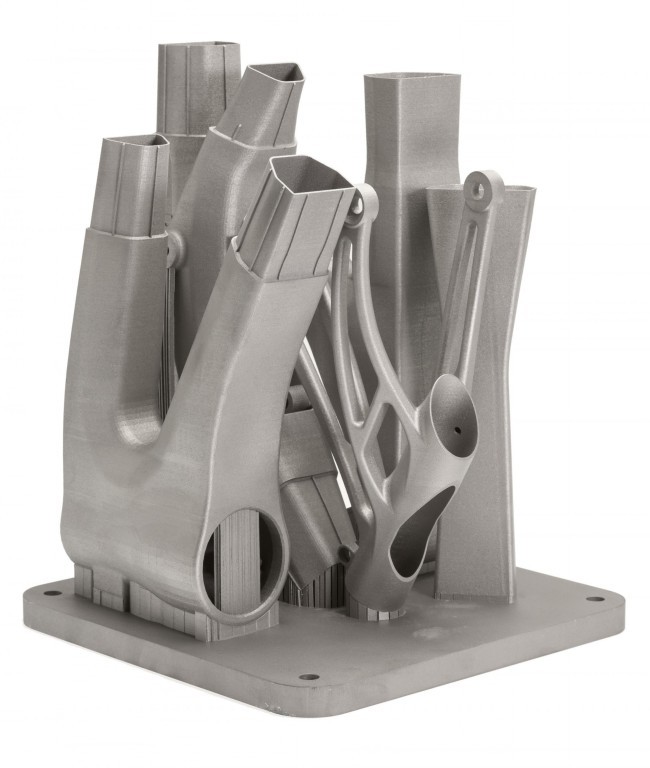 Titanium 3D printed components of the Empire Cycles – Renishaw bike. The entire frame is too big for most metal 3D printers so the components are designed to fit within the 250x250x365mm3 build volume of the Renishaw AM250 printer.

All this also comes with another significant advantage that affects almost every traditional manufacturing technique: Wasted Material. With the adoption of additive manufacturing, the reduction of material used not only encompass the object itself but also the manufacturing processes, with substantial reductions depending on the design and characteristics of the object. Using as an example the hypothetical part in the image below, it would be needed to remove twice the material required for the part itself if it was built by CNC (Computer Numerical Control) machining, meaning not only a waste of money but of time as well. 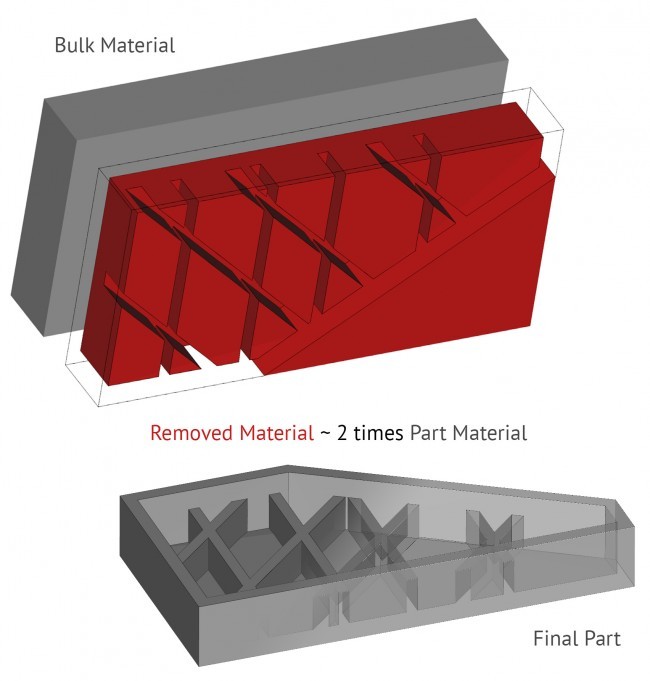 Although technologies like CNC machining or molding are still the best fit or even the only option in some cases, 3D  printing alternatives are catching up fast and are likely to keep gaining momentum as one of the most polyvalent and powerful manufacturing options. As always, it comes to a trade-off between between the different capabilities offered by each technology but when it comes to material efficiency, 3D printing is leading by a good margin. 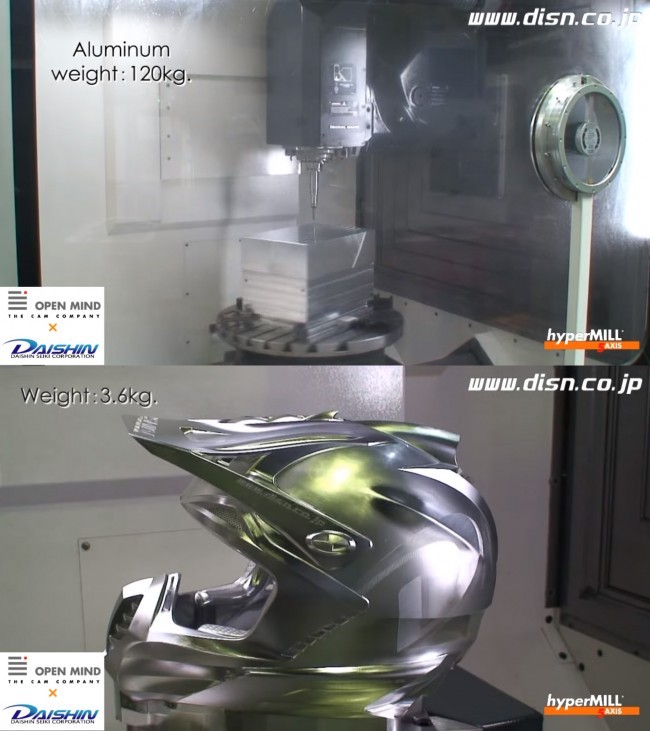 High quality surface finish is one of CNC’s strongest point. Low material waste is not.

As you can guess, all these advantages are going to be giving us a lot more than  extremely cool mountain bikes. In the aeronautical and aerospace industries, certainly the most important drivers of metal 3D printing development, their impact is going to be felt by everyone who boards a plane from time to time, as these wonderful flying machines will be getting lighter and will be powered by more efficient engines, making flying cheaper, one component at the time. If you are following our How 3D Printing will revolutionize your industry series you probably already read about other ongoing uses in the medical and maritime industries, and if you stay tuned you will soon learn more about how exactly those rockets and jet engines are taking advantage of additive manufacturing while simultaneously pushing the boundaries of these technologies to previously undreamed levels.
And hey..! Did I say that topology optimization, no-assembly design and material waste reduction not only applies to metal 3D printing? Boost your plastic mechanical design, make it lighter, cheaper and cooler than even before using the same techniques than the most advanced technological companies are using!

If you’re interested in getting in touch with us for more feedback on your mechanics project, feel free to contact us or consult our dedicated page.