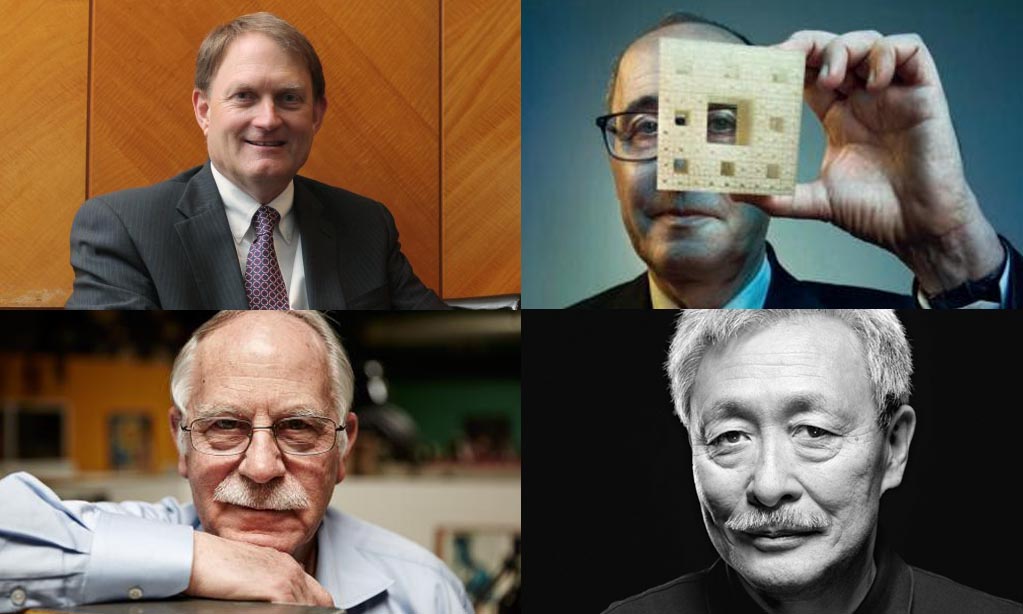 The history of 3d printer: from rapid prototyping to additive fabrication

In 1980, rapid prototyping was born. From 1980 to 1988, many experiments were made and different 3D printing processes were created. But who were the men and women behind this incredible innovation? We can guess they perfectly knew they had created a revolutionary process. But maybe they didn’t know how it was gonna evolve and prompt profound transformation in the whole manufacturing world. Today, we invite you in a trip in the past, to get to know those women and men better and understand what mood and state of mind they were in when they created what we call today additive manufacturing. Discover the history of 3D printer.

In a previous article, we narrated the History of 3D printing. It’s very interesting to see how it evolved from chemical experiments to an industry.

In this article, we’re concentrating in 3D printing processes invented during the 1980’s:

1984: Stereolithography by French then abandoned

1986: Stereolithography taken up by Charles Hull, founder of 3D Systems

1988: Carl Deckard brought a patent for the SLS technology,

He applied for a patent for his rapid prototyping system in Japan, in May 1980. He described his system as follow: a vat of photopolymer material is exposed to a UV light that hardens the part and builds up the model in layers. Unfortunately, because of a funding issue, the full patent specification was not filled within the one-year deadline after application.

Alain le Méhauté, at the time young electrochemical engineer, was carrying out basic research on fractal geometry. His colleagues disagreed with his equations. The idea was clear for him: he had to prove he was right. He had to create a ‘fractal object’ which he explains to be ‘an object with local properties that are equivalent to its global properties.’ Because of the complex shape of such an object, no machine permitted such creation. 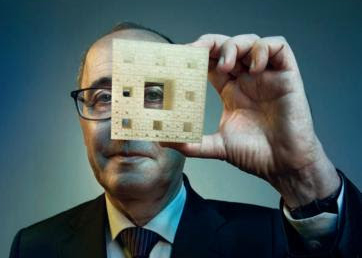 At the canteen, he talked to Olivier de Witt about his idea and the issue he had to invent a machine that could build his ‘fractal object’ with all the complexity it requires. Olivier de Witt was at the time working on lasers for Cilas, subsidiary of Alcatel. And guess what? Olivier told him: when two lasers cross each other, a liquid (monomer) can become a solid (polymer). They had just thought of building a ‘3D printer’! They would use a laser to try and build Alain’s ‘fractal object’.

Their first experiments were not conclusive. They presented their idea to Jean-Claude André who was a researcher at the CNRS. Always very light-hearted, he qualified the idea to be ‘an excellent good bad idea’. He came with the idea to build the object layer by layer, and not from the block. From this moment, the 3 men started working together to build a ‘3D printer’ The first object they created was a spiral staircase!!

They filed a patent for stereolithography process, three weeks before the American Chuck Hull who created 3D Systems (see below)! The French Patent was granted in January 1986. (Stereolithography (SLA) gave its name to the very well known .STL file extension.)

They very sadly had to give up the project. Alain Le Méhauté became a teacher in Kazan, Russia, Jean-Claude André started working in a private company, and Olivier de Witt directed, for a while, 3D System French subsidiary. 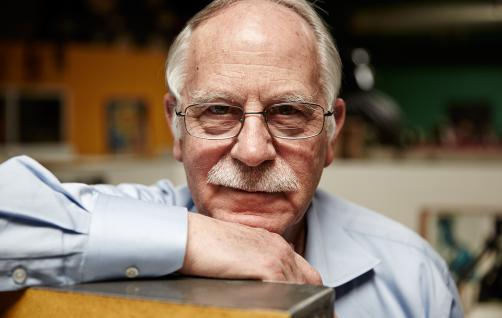 Chuck Hull graduated from Central High School in Grand Junction, Colorado and received a BS in engineering physics from the University of Colorado in 1961. Today, he has 93 patents to his name in the US and 20 in Europe.

In 1983, Hull was working for a company that made tough coatings for tabletops and furniture using ultraviolet lamps. Like others within the industry, he was frustrated that the production of small plastic parts for prototyping new product designs could take up to two months. To go hereafter this frustration (or intuition?) he suggested that they investigate a new way to use the UV technology: placing thousands of thin layers of plastic on top of each other thanks to UV technology. Fortunately, he was given a little lab to experiment his idea, what he did during his evenings and weekends.

One night, after months of experimentations, he could finally ‘print’ something… his excitement was so high that he woke up his wife in a hurry. The only thing she said was ‘This has better be good!’. According to Hull, medical application possibilities and the maker movement made 3D printing take off.

Very quickly after the patent was granted for this new production method, he set up 3D Systems in order to commercialize his new discovery: stereolithography. The first commercial product came out in 1988. Hull had the intuition the technology would take between 25 and 30 years to find its way in production.

In terms of 3D printing materials, he used materials called ‘photopolymers’. Acrylic-based, they are liquid at the beginning of the process. An ultraviolet light hit makes them instantly turn solid. This is how the stereolithography (SLA) process works.

How an undergraduate student changed the face of manufacturing (1988) 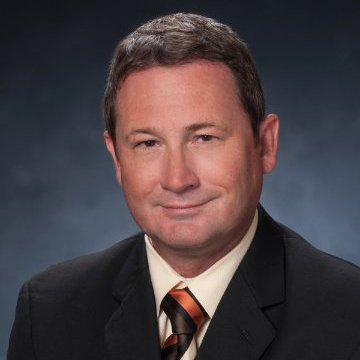 At the age of 8, when visiting the Henry Ford Museum, Carl Deckard decided he wanted to be an inventor…

He was a mechanical engineering undergraduate at the University of Texas when he came up while working at a summer camp, with the idea of an incredible 3D printing technology: selective laser sintering (SLS)!

During this summer camp, he was working on an iron-based machine shop (TRW) in Houston that made parts for oil fields. This TRW machine was on the cutting edge, using CAD in programs that controlled machine tools. But Carl Deckard considered there were still too many castings in the process. He worked for more than two and a half years on developing a technology that would enable a machine to produce parts without any casting: he invented selective laser sintering technology.

Luckily, he was really much supported and the project could be developed. As a Master and PhD student, he continued his revolutionary research, with the help of Dr. Joe Beaman, a professor at UT-Austin.

The ME department, the Regents from The University of Texas at Austin, the Austin Technology Incubator, and National Science Foundation backed the idea from the beginning; SLS technology was born!

Carl Deckard filed a patent for SLS in 1987. This patent was issued in 1989 and SLS was later licensed to DTM Inc, which was later acquired by 3D Systems, in 2001, at a $45 million valuation. 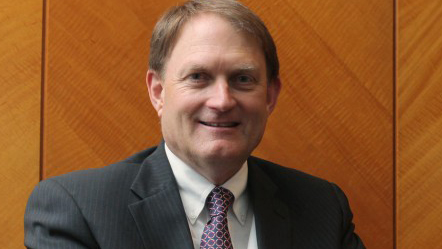 All the story of Fused Deposition Modeling (FDM) started with a personal story of Scott Crump: he wanted to create a toy froggy for his 2-year-old daughter. As a mechanical engineer, he also wanted to experiment a machine that would build automatically 3D objects. In his kitchen, he tried to mix candle wax with plastic (polyethylene). Using a hot glue gun, he realized he could create an object in 3D. The toy froggy was a lot of burnt plastic at first. His wife convinced him to move his project to the garage and continue experiments.  He wanted to automatize the process. He thought that if that glue gun were attached to a robotic XYZ gantry system, the modeling process could be done automatically… Fused Deposition Modelling technology was born! The 3D printing process on which most 50% of the 3D printers rely. He also worked on ABS plastic filaments that are used in FDM machines.

As he was going further into his experiments, his wife highly advised him to turn his passion into a business or give it up. Guess what he did?

He and his wife, Lisa Crump patented FDM technology in 1989.

In 1992, Scott created the first operational FDM 3D printer. Very soon after that, he and his wife, Lisa, co-founded the company Stratasys.

Today, he’s Chairman of Board of Directors of Stratasys, Ltd.

It’s amazing how in less than a decade, the three game-changer 3D printing technologies were born:

These stories are very inspiring for us, and no doubt that our industry will be transformed by new discoveries! What is your biggest expectation for 3D printing? Answer our State of 3D Printing survey to let us know!

You can also find more information about these technologies and how they compare in these articles: