It’s been two weeks since Sculpteo announced its partnership with Sony regarding the integration of an app in the new Sony Xperia XZ1 mobile that will allow the direct 3D Print of the 3D scans captured through the app. The media embraced this collaboration, world widely spreading the news. According to them, partnerships like this are the ones that allow individuals to get access to the full potential of technology and thus, they are much appreciated. That said, Sculpteo is proud to have reached more than 25 media coverages in 5 different languages, and in 8 different countries around the world. Discover some of them below.

How the USA reacted to Sculpteo and Sony new partnership

The american press created big buzz about Sculpteo’s new partnership, as this news appeared on 12 websites. They all agreed on the powerfulness of the new Sony Xperia XZ1, whose potential is strengthened thanks to the 3D printing service that Sculpteo will provide to its features. It comes as a great ease to the mobile users to reach the printing button in just one click and get the opportunity of worldwide shipping of their 3D print in multi color!

“Sony has selected Sculpteo as its partner particularly for the latter’s expertise in 3D printing, especially with multi-colored materials” wrote androidguys.com

“The Sculpteo angle is that the deal enables the 3D Creator app to be hooked up directly with Sculpteo’s extensive 3D print service, enabling someone to literally capture a 3D model and immediately request a 3D print – in color – of the capture”, said Fabbaloo.com 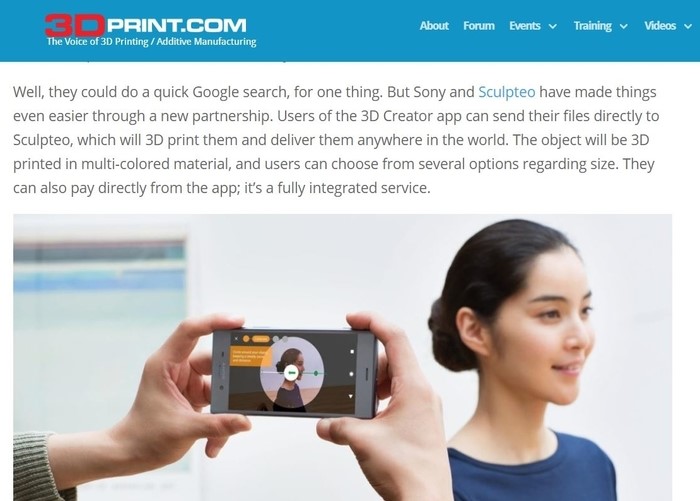 “Now, Sony and Sculpteo have revealed that they’ve teamed up to give people the power to 3D print anything anytime they want to, using only the XZ1”, said pcfiend.com

The french press is talking about Sculpteo and Sony

Since Sculpteo is a french company, french media immediately talked about this news. The media provided its readers with useful information about the technicalities of how the 3D creator application and the 3D printing service are connected, as well as the quality of the prints that Sculpteo provides. 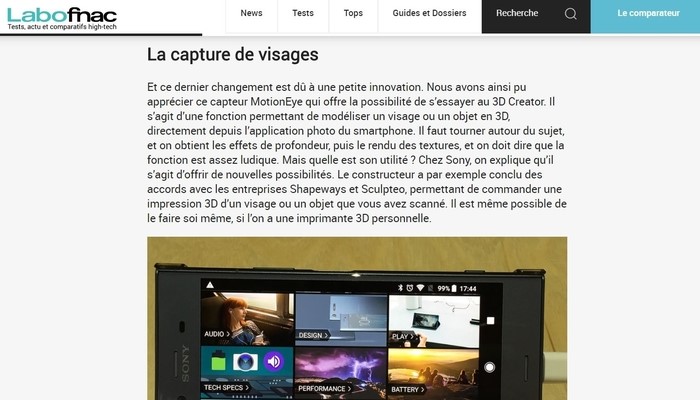 Among the french media coverage (labo.fnac.com, realite-virtuelle.com and kulturegeek.fr) some of the most honoring applauses included comments as the following:

“Note that Sculpteo printers can print an object with several different colors. This fully integrated solution (from 3D scanning to 3D printing and printing payment) is an innovation on a smartphone, and prefigures mobile services that until recently would have been considered totally futuristic (3D scan, AR, etc.)”, was said on kulturegeek.fr

Sculpteo and Sony being mentioned in Spanish press

Spanish press talked a lot about Sculpteo’s service through the new Sony Xperia XZ1 mobile phone. The fact that was mainly pointed out through the media todotech.com and elandroidelibre.elespanol.com, was the ease of the 3D creator application. All the procedure, from the 3D scan of the face or object, to its 3D print and payment, are all managed through the application, without the need of accessing a computer: thing that seems to be very evaluated. 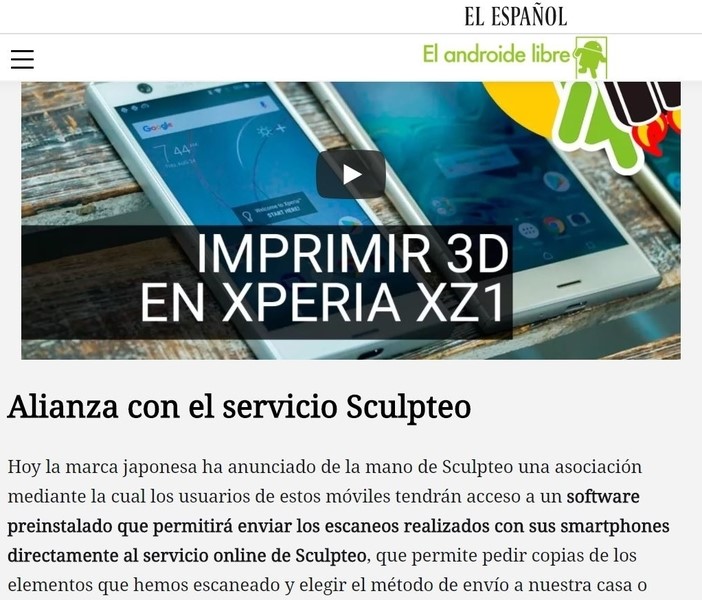 “The software of Xperia XZ1 is capable of allowing the editing of the 3D scans, but it was thought that to print them, you should send the file to a computer. However it will not be necessary, since it will come with a pre-installed program on the mobile and that will send the scan directly to the online service of Sculpteo.”, todotech.com mentioned

From Europe to South America: More media coverage about Sculpteo and Sony

Sculpteo’s name was not heard only in European countries, but also in countries of South America like Brazil and Mexico ( tudocelular.com, colunatech.com.br and adrenaline.uol.com.br).

The dutch and swedish press (numrush.nl, tweakers.net and feber.se) also announced the good news of Sculpteo and Sony’s new partnership. Their main focus was on the ability of Sculpteo to ship worldwide the final products, as well as the ease of the payment method which is moderated through the mobile app.

“The file can then be sent directly to the printers of Sculpteo. Inside the app, you can also pay for the 3D print. Sculpteo’s 3D printers will then start and the final product will be sent to you. You do not even need to live in the US: the company sends 3D-printed products to every country in the world.” was said on the dutch media numrush.nl

If you want to see other articles where Sculpteo is mentioned, you may visit the press room page of our website, and check what the web is talking about us, or the newspapers, or other media.