XtreeE is a cutting edge company, working on revolutionizing the construction and architecture industries, through large-scale 3D Printing of concrete. Philippe Morel, XtreeE president, was kind enough to receive us in their Paris office, in the coworking space Cargo. In this interview, you’ll learn about the company, the stakes of 3D printing in construction, and Philippe Morel’s advice for tech entrepreneurs.

Philippe Morel, XtreeE president, received us in their office.

Sculpteo: What is XtreeE ?

Our partners include ABB, LafargeHolcim and Dassault Systems, who accompany us within the 3DExperienceLab, and give us a privileged access to their software tools.

Why the name XtreeE?

The name comes from a mental association between the “X” which visually represents a recurring pattern in construction (triangulated or braced structures), the idea of tree-like structures, and tridimensionality with the repetition of “e”. As it’s often the case, it stemmed as much from the poesy of the moment as it did from the apparent rationality of my explanation!

Who are your team members?

Personnaly, I am an architect (I practice and teach), I co-founded EZCT Architecture & Design with Felix Agid, also member of XtreeE. Charles Bouyssou, Alban Mallet, Mahriz Zakeri are also architects. Philippe Roux and Romain Duballet are engineers (and architects), etc. All of the founders is definitely linked with the worlds of architecture and construction.

We’re also lucky to have investors and partners who, even though they don’t belong directly to the architecture field, have a great experience of construction, and have helped us immensely. 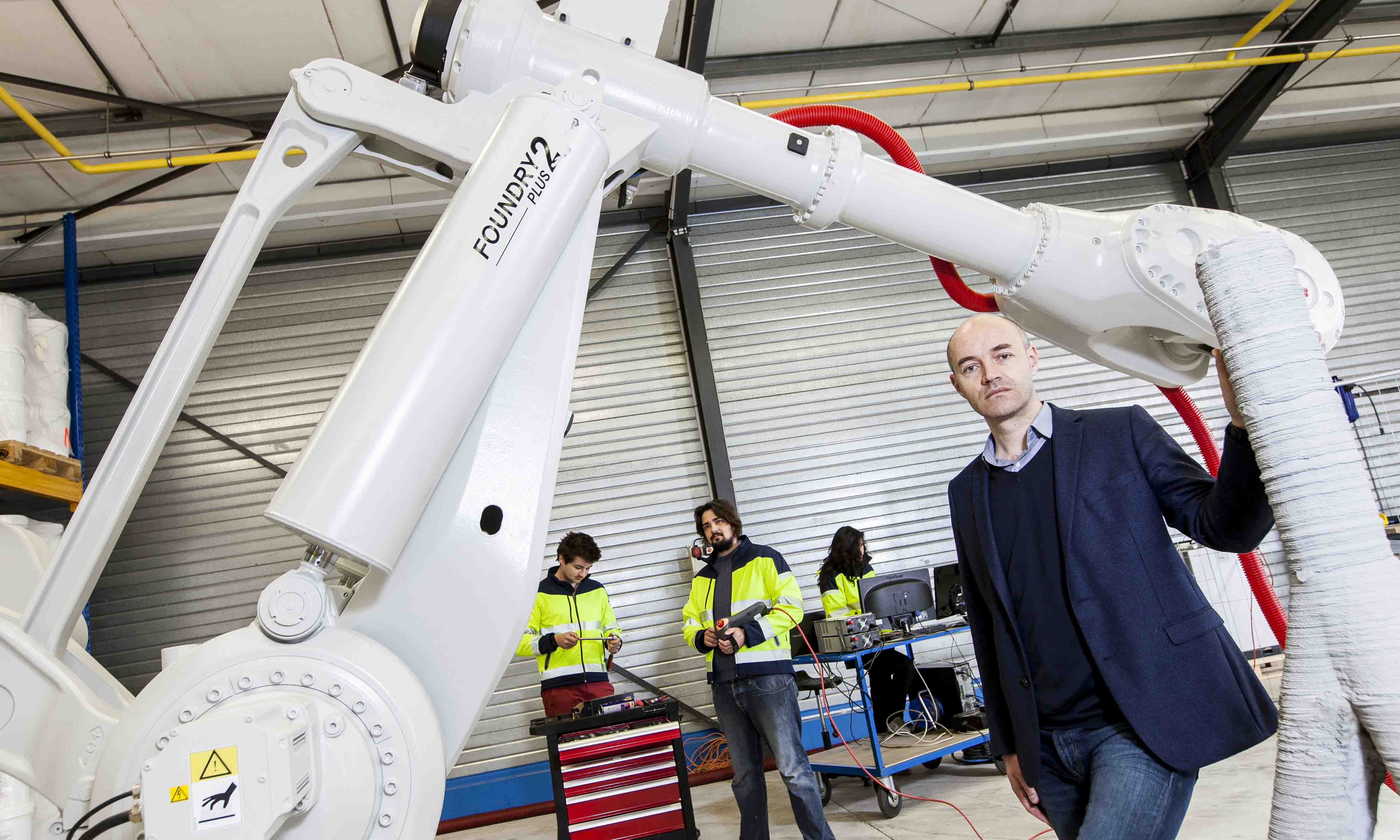 Who are your clients?

We work with some large accounts like Eurovia, Point P Travaux Publics, and Saint-Gobain (for consulting), but also other clients like Zaha Hadid Architecture, or more local actors, mostly for prefabrication.

We managed to be the first in Europe to build a structural pillar using 3D Printing, in a public space, in Aix. It’s a 4m high pillar, in a gym. This was a challenge on several level: of course, the technical one, but also the normative one. 3D printing is very new in the construction field, which means that laws don’t recognise 3D printing as a safe mode of production, which makes it particularly difficult to use 1) as a way to build a structural element, and 2) as a way to build in a public space. What we did was we poured classical concrete within the pillar, so that there was a traditional material to be taken into account in the safety measurements. It still remained a great step forward for additive manufacturing, simply by setting a precedent! 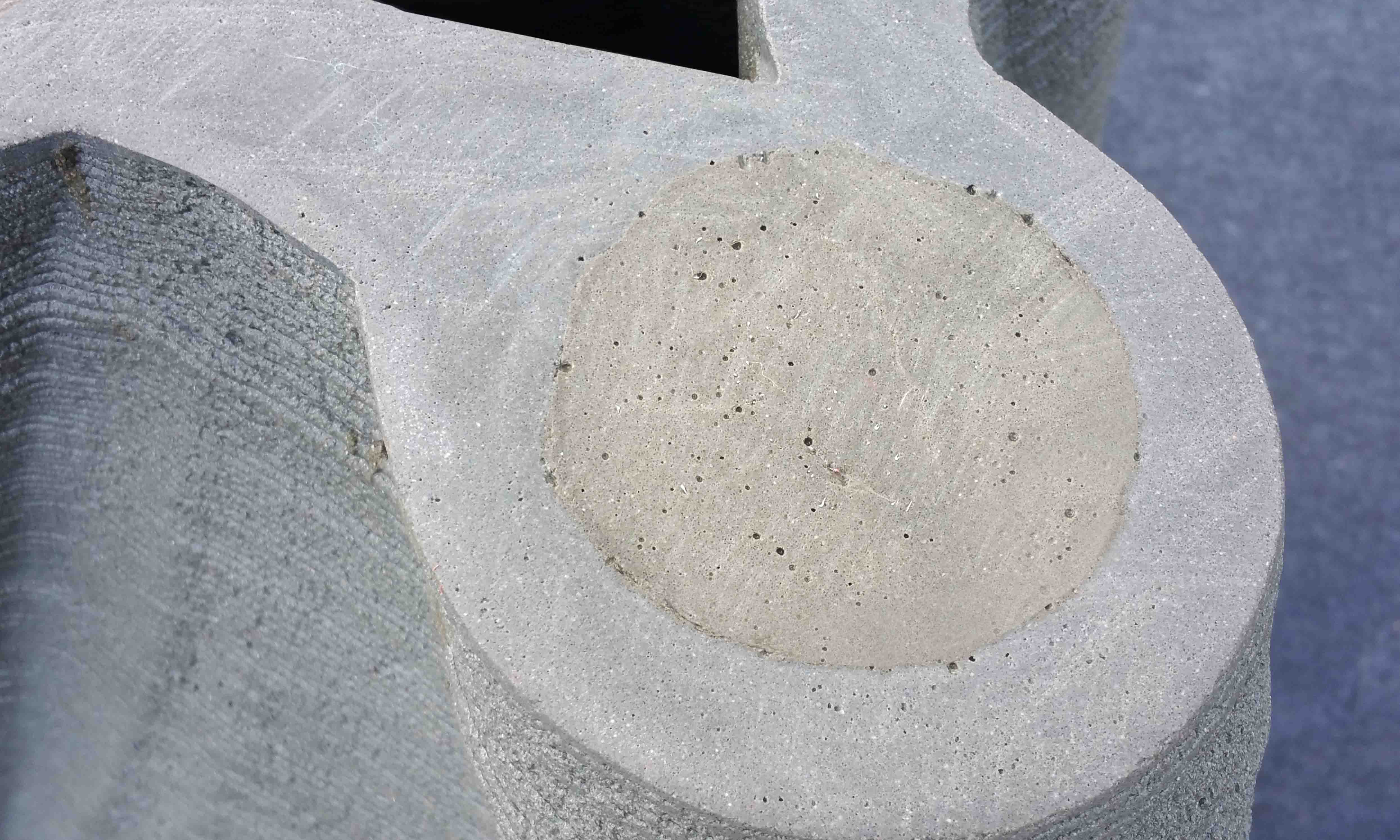 Another considerable realisation was the pavilion we 3D printed in partnership with Dassault Systems, ABB and LafargeHolcim, and presented to the public on Sept. 20th, in Vélizy.

How does your technology work?

We work mostly with concrete (we use it in 90% of cases), but also sometimes with clay, to create waste moulds: we pour concrete into the mould, then we dissolve it in water.

As for our 3D technology, the closest equivalent would be fused deposition modeling (FDM), in which the matter goes through a printing nozzle in its liquid form, and then solidifies. In our case, the change of state is chemical: the concrete goes through our system in a very liquid form, and when it comes out, we add in a product that changes its rheological properties, and increases its viscosity.

What do you develop in-house? The materials? The machines? The software?

In the XtreeE team itself, we develop hardware elements (3D printing systems) and software elements to pilot the 3D printing robots efficiently. The materials are designed by our partner Lafarge Holcim. And we work with industrial robots of the brand ABB (our other partner).

At the moment, we have two robots, that we operate in our 350m2 a bit outside of Paris. We’ll probably move into a bigger workshop in 2017. 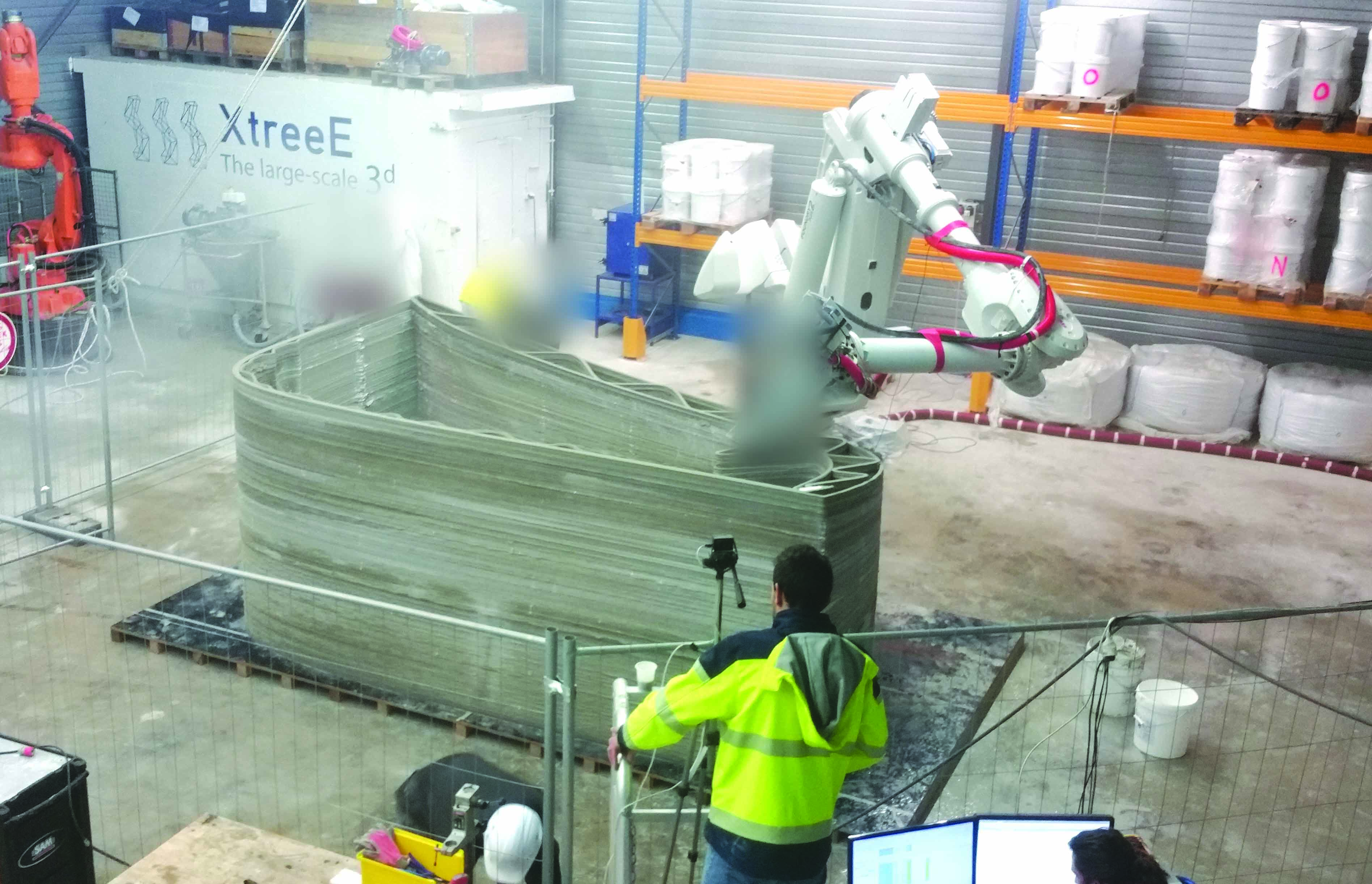 What about mobility? How do you 3D print on site?

We work very hard on making mobility easier: it’s a key question! We work on new robotic approaches, both to allow to move the robots, and to 3D print at a much larger scale: robotic arms and special 3D printing nozzles, in order to overcome traditional construction restrictions, and gain dozens of meters in range.

Part 2: 3D printing and construction: which stakes and which challenges?

Who else is present on the market of 3D printing and construction?

We aren’t the only ones, but we are relatively advanced. The most famous additive manufacturers for construction are Winsun, in China. There are some companies in the US, and more or less one per European country. What’s certain is that it’s a topical issue, that is being taken on everywhere.

Why is it relevant to use 3D printing in construction?

Additive manufacturing grants considerable advantages to construction: it allows to use less concrete, to arrange it better, only use what is really needed, and to develop and use new types of concretes, that contain less cement.

The opportunities introduced by 3D printing are also: the differentiation of parts instead of the current standardisation, fabrication on demand, the absence of stock, lean manufacturing, and flexibility. It’s a flexibility as much on the pace of construction as on its geography: it allows us to build as closely as possible to the demand, at a local scale, in small units of production. And going local is also a necessary transformation for construction today (as it is for many other fields).

You talked about arranging the concrete better. We wrote an article a few weeks ago about Neri Oxman, who conceives alveolar concrete. Is that one of your projects?

No, we don’t work at the same scale: in Neri Oxman’s work, the layers of concrete are 3D printed very finely (more or less at a submillimetric scale), whereas we 3D print with layers that are 3mm-thick. It’s a matter of production speed: in five hours, we can build a 2.5m high wall! Nonetheless, rethinking the granular structure of concrete, as Neri Oxman does, isn’t excluded at all with our technique, it will just be at a larger scale. 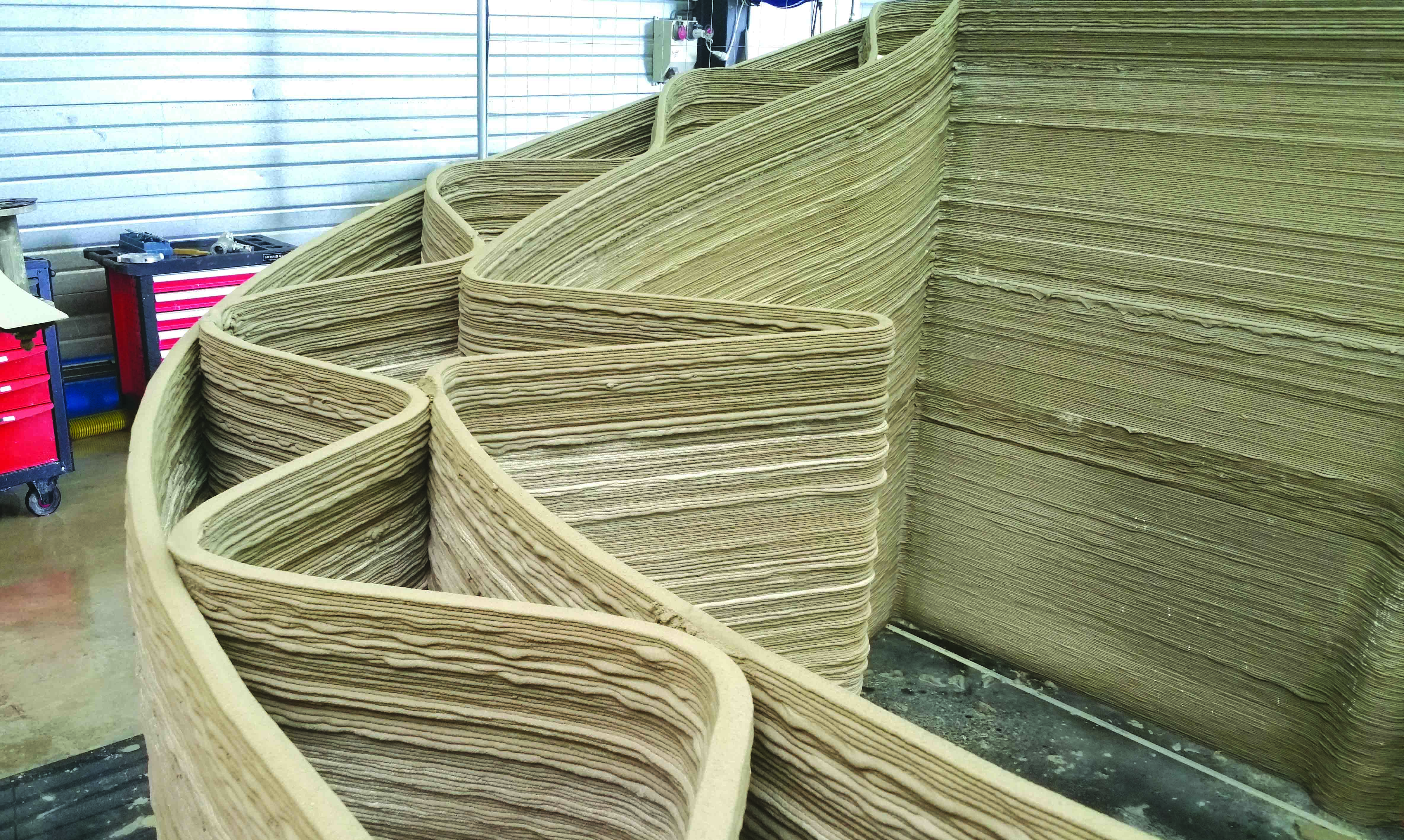 What about the architectural language? What do you think 3D printing will change about the way we think architecture?

I have no doubt that 3D Printing will spark a renewal of the architectural language, and of the way we approach architecture. For too long, architects have conceived buildings without thinking about how they’d be built: we separate conception from construction, especially here in France, in which we have an abstract view of buildings, we draw spaces rather than walls. With 3D printing, this will need to change, from the training that we give architects to the way they later practice. By conceiving specifically for 3D printing, future architects will need to foresee the specific limits of 3D printing. A lot of people believe that 3D printing allows to create anything from nothing, but it’s not the case. 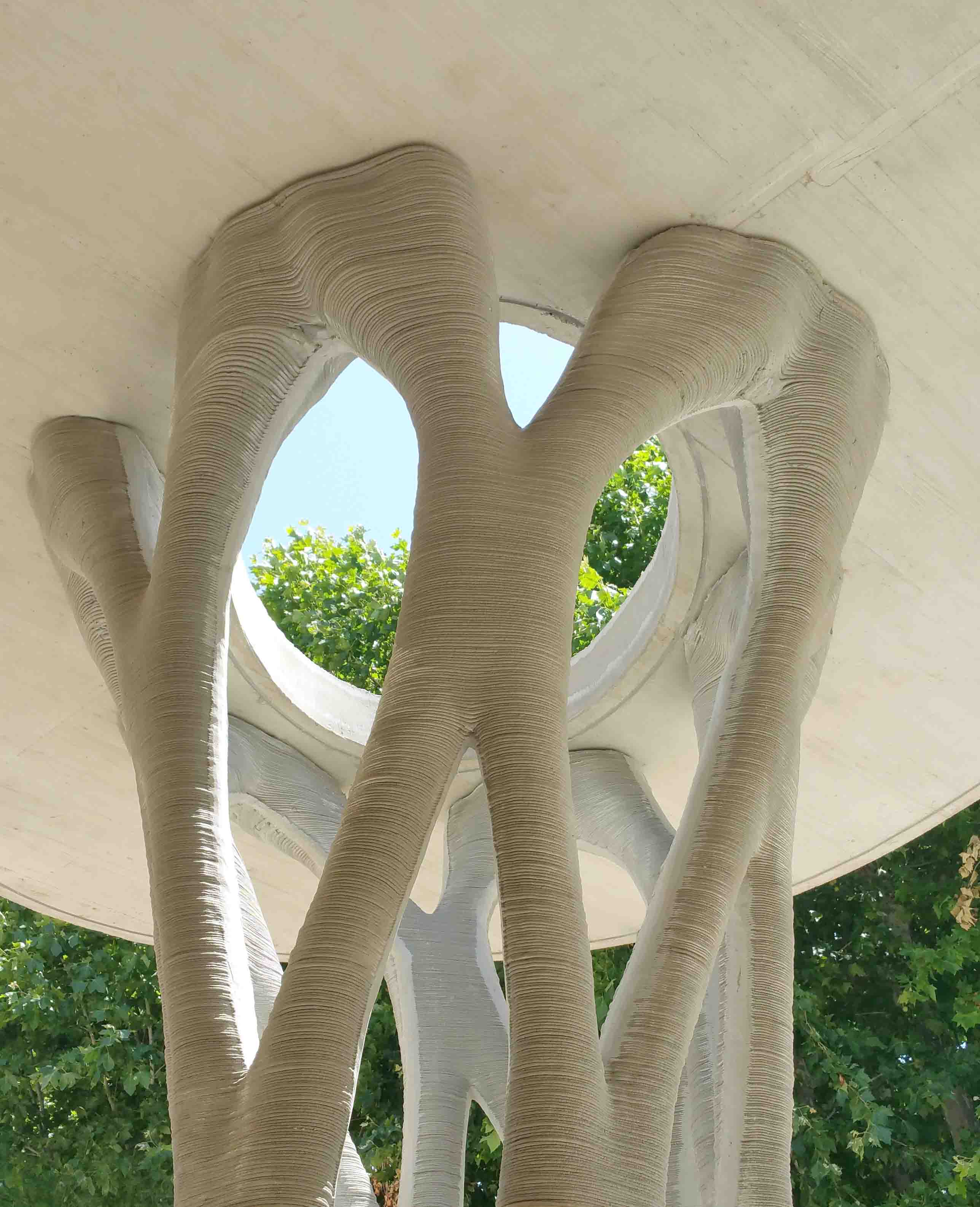 For example, what can’t you do with 3D printing?

A typical example, that a 3D printing service like Sculpteo probably knows very well, is the question of overhangs and supports. We can’t 3D print a part of a building directly above an empty space without supports. We sometimes create cement supports, but it’s a bit of a pity, it means breaking them off later, even though the material is quite expensive. The best solution would be to design the building another way, to avoid the overhangs. Though there will be a reflexion, of course, on how to reuse the supports that are needed, for example crushed under a slab.

We’ve talked about opportunities. What about the challenges faced by 3D printing in construction?

I mentioned one challenge already: legislation. In the field of construction, since 3D printing is very new, everything remains to be done. The materials need to be tested, validated in the lab… and new texts need to be written. There’s also the question of insurances: today, if an individual or a company has a house or a building 3D printed, it will be considered as safe as if they had built it by hand, without any experience or knowledge. This means it won’t be possible to insure it. Some may take the risk, but most won’t. In this way, legislation and insurance slow down the implementation of 3D printing in construction – and it is good in a way, since it’s a very important safety issue.

Part 3 : Tips for entrepreneurs in the digital manufacturing field

Which tips and advice would you give to someone who’s about to start a tech business, in particular someone who’d use digital manufacturing?

First of all, you’ll need to be aware that creating a startup is hard. You’ll need to be careful, to get fully involved, work hard, surround yourself with the right team, and truly believe in your project. Second, entrepreneurship must not only be a way to take advantage of a trend for your own benefit: you’ll need a true desire to innovate, to bring something new to the table. You can’t expect that the problem you’ve identified will be solved with the wave of a magic wand. You’re building with new and refined technologies.  You need to keep in mind that no matter what, you’ll be a part of the experiment, a guinea pig, in a way. How the technology changes you is a part of what you’ll discover. You’ll need to contribute, with your whole person!

For example, what does XtreeE bring to the table?

Well, the 4m high pillar I talked about earlier is an important leap forward: with it, we’ve proven that 3D printing could be used where it wasn’t thought possible before: in the public space, and as a structural element. By showing that it is possible, we’re already encouraging innovation.

The research we’re conducting also take an important part in forwarding practices, mentalities, and knowledge in the construction and architecture fields.

Which challenges have you encountered, that you hadn’t imagined, and what did you learn from them?

We are bringing 3D printing, a technique that needs to be extremely precise and measured, into an environment which, by definition, is often imprecise, sometimes even uncontrollable: the climate, the environment, the outside. For this reason, it is very hard to make sure that a process we’ve done one way today will be replicated exactly tomorrow. When there is matter, not just digital and robotic, there is necessarily some part of unpredicted (temperature, humidity…). This is to be taken into account, even when you’re working with tech!

It was a great pleasure for us to share this interview with you, and we hope you’re as excited by XtreeE’s work as we are. To learn more about 3D printing in the field of architecture and construction, read our application page, and this blog article.

Discover this article in which we explain Neri Oxman’s way of 3D printing concrete.