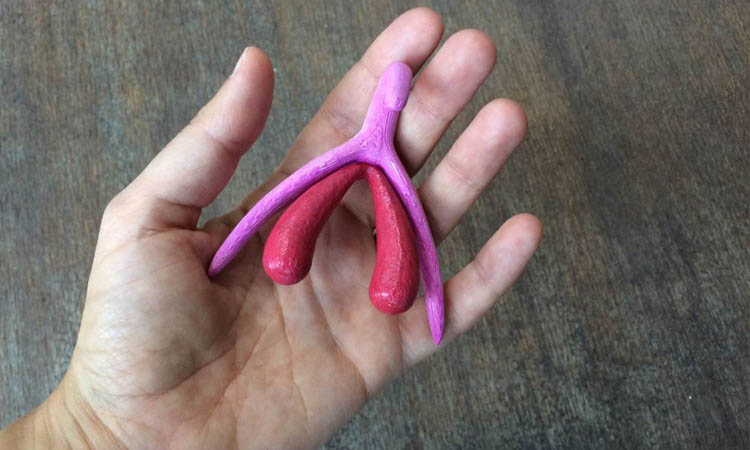 The Clitoris Printed in 3D by Odile Fillod

Odile Fillod, French sociologist studying sciences and scientific vulgarization, recently 3D printed a clitoris, on-scale and anatomically correct. It was largely talked about because of its potential impact on education. Today, we take the opportunity of International Women’s Day (March 8th) to tell you about this object, its importance in building an exact sexual and anatomical education, and about how 3D printing can forward education, on topics that are often ignored.

Part 1: Odile Fillod’s research, and the importance of an anatomically correct sexual education

Sculpteo: Can you introduce yourself and your work?

Odile Fillod: I am a sociologist, I study sciences and scientific vulgarization, with a specialization on sexuality/gender. My research is mostly centered on how scientific literature participates to the naturalization of gender. It is motivated by the will to make mentalities and practices evolve.

In particular, my research led me to notice that school sciences textbooks were full of sexist biases, most of which are not perceived. One of these biases is the absence of a correct representation of the clitoris (and even, in some cases, the absence of a mention of the clitoris) in a large number of textbooks which are supposed to teach what female genital organs actually look like.

S: Why did you choose to 3D print a clitoris in particular, and not another body part? Why was this important to you?

O.F.: Providing a solid base of scientific, correct and complete knowledge regarding the anatomy and functioning of genital organs, as well as sexuality, is extremely important and is one of the duties of our schools. When talking in particular about the clitoris and its bulbs, the stakes are many.

The first of them is to help people understand that the penis and the clitoris-and-bulbs-complex are homolog organs, which work in the same way. This has a wide range of concrete implications. It helps understand that women’s sexual excitation also translates into an erection, that it’s often difficult for them to orgasm without the clitoris being stimulated, and that feminine pleasure is in no way more mysterious or more cerebral than masculine pleasure.  It also leads to understand that excision isn’t a simple feminine “circumcision”, but a grave sexual mutilation: in its most common fom, it would be equivalent to cutting off and removing the whole head of a penis. Furthermore, you come to understand that people who have an ambiguous clitoris/penis are simply intersersex, and can have a perfectly “normal” sexuality if we quit trying to make them fit into a binary norm at all cost.

“We need to end this idea that female desire is an enigma!” 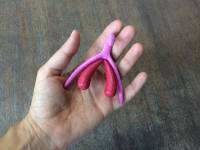 It’s also important on a symbolic level: you grasp that there aren’t two fundamentally different sexes, with men on one side who spontaneously feel desire, and women on the other side who wait to be desired. Knowing the clitoris, how it works, its role in sexual pleasure, its fundamental homology with the penis, and its shape (not reduced to a tiny piece of flesh) helps women constitute themselves as active subjects of their sexual lives, rather than passive objects of the others’ desires. I think it’s a key element to deconstruct asymmetrical representations of desire. Those asymmetrical representations need to be deconstructed because they encourage the sexual harassment and aggressions that women keep enduring massively today in our culture.

Finally, it’s simply important that women be able to understand their body and make it their own, learn what gives them pleasure and why. We need to end this idea that female desire is an enigma!

S: How can 3D printing help forward the teachings you are promoting?

O. F.: 3D Printing the clitoris and its bulbs will help teachers talk about these topics to their students. It is easier to understand how the organ is made when handling it in 3D than when looking at 2D drawings. Especially when, like in this case, the structure is composed of several types of volumes, in several plans and following several axes. 3D Printing allows to better assess the size of the organ. Plus, the fact that it’s both technical kind of fun helps bring the topic up. 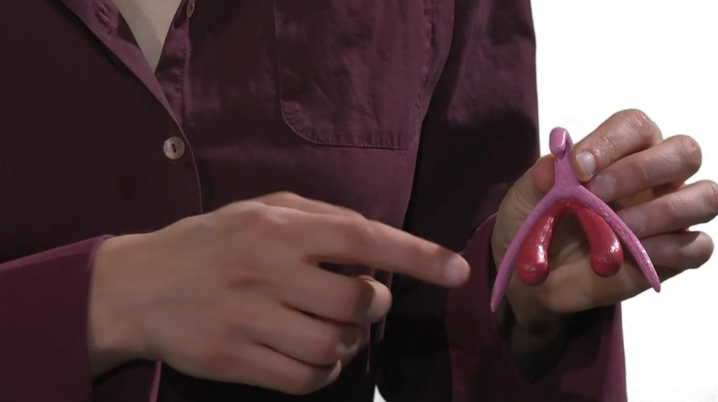 Image taken from one of the videos of the site Matilda

S: Can teachers use 3D printing to point out and compensate some of the shortcomings of the available educational resources?

O. F.: As I said, school textbooks are gravely flawed: not one shows the bulbs of the vestibule, not one shows the whole clitoris. But it’s not only the textbooks. The resources provided by our education system (in France, the Académies and the Ministry of Education) aren’t the best either on that particular point. A 3D model of the human body was provided by the Ministry of Education in 2014, and the clitoris was absent from it, when the penis, of course, was there!

S: How did you come to use 3D printing?

O. F.: Following my work on sexist biases in biology textbooks, I was contacted to take part in the creation of an antisexist educational videos platform. The idea was to talk about sexuality-related topics mentioned in the programs for secondary and high schools, and to compensate the biases I had identified. It’s in that context that I decided to show what the whole clitoris looked like (the clitoris-and-bulbs complex), which is why I created an on-scale 3D printed clitoris. There existed 3D model of the clitoris, so I designed the 3D file with the help of the Fablab of the.

S: How did you design the clitoris in 3D, and what did you do with the 3D file?

O. F.: Mélissa Richard, who works at the FabLab, took on the 3D design of the model, based on sketches and dimensions I had given her.

We then shared the 3D file with a creative commons licence.
This way, school teachers, sexuality educators and sexo-therapists can freely 3D print the clitoris. As for the series of videos in which I show the first 3D printed clitoris (3D printed at the Cité des sciences), they are all available for free on the educational website Matilda (in French).

S: The clitoris was 3D printed using our online service?

O. F.: Quite a lot of people 3D printed it using Sculpteo’s online services, and I made the first models using it too. I was very satisfied with the white polyamide version. However, I wanted to 3D print the model in 2 colors to differentiate the clitoris and the bulbs, since they don’t exactly have the same anatomic and physiologic characteristics, and not the same color either, the clitoris is a bit lighter than the bulbs (reminder: you see them only upon dissection, as the whole complex is almost completely hidden under the inner labia and some muscles). But the 3D printing trial in color didn’t fit my needs: it was too fragile to be handled in class. (Note from Sculpteo: the material used for multicolor 3D printing is a composite material containing plaster. It is very useful for objects like figurines and aspect prototypes, but is more fragile than our usual polyamide. Which makes it, indeed, not the best fit to be handled repeatedly by students).

Ideally, it would be best to 3D print it in a flexible material like latex, in two colors. I hope the technology will be available soon, at a reasonable cost. 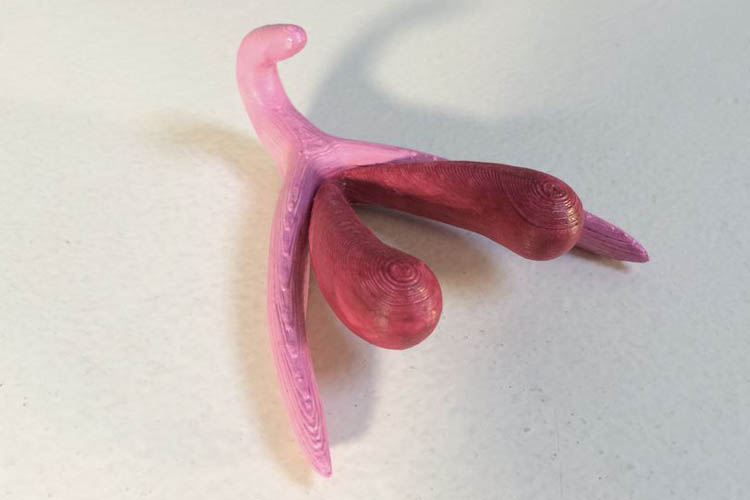 The clitoris 3D printed with FDM and painted

S: Do you have other projects related to 3D printing?

– the neighboring organs, which help to understand how the clitoris is positioned,

– the whole penis: to my knowledge, there is no complete model of it yet. And only the knowledge of its full anatomy will allow to understand its anatomical and functional homology with the clitoris-and-bulbs complex.

We are very happy to have shared with you this customer story. If you wish to know more about 3D printing in education, click here. To learn about other examples of 3D printing applications, click here. The clitoris 3D file has been shared with a creative commons licence, so if you wish to 3D print a clitoris to forward sexual education around you, you simply have to download it here and transfer it to our platform.

To learn more about Odile Fillod’s work, you can visit her blog here (in French).