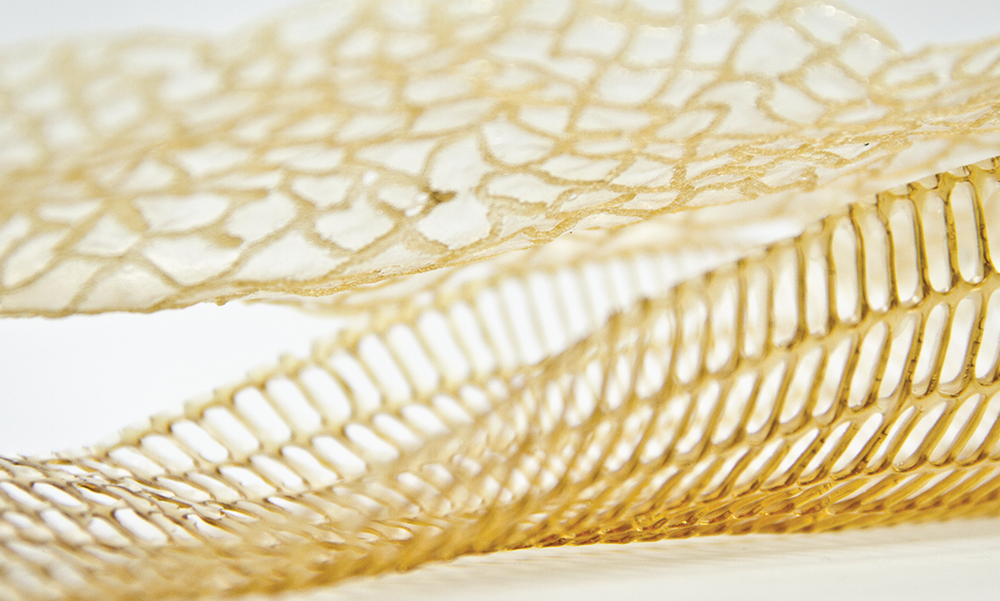 Have you ever heard about “chitin” before? Chitin is one of the polymers that you can find in abundant amounts on the planet. Crustaceans, such as shrimps, crabs, butterflies and scorpions produce millions of tons of it every year. The interesting thing about chitin is that the density of this material can change according to where on the animal’s body it is. It can be either stiff and opaque, or light and transparent. 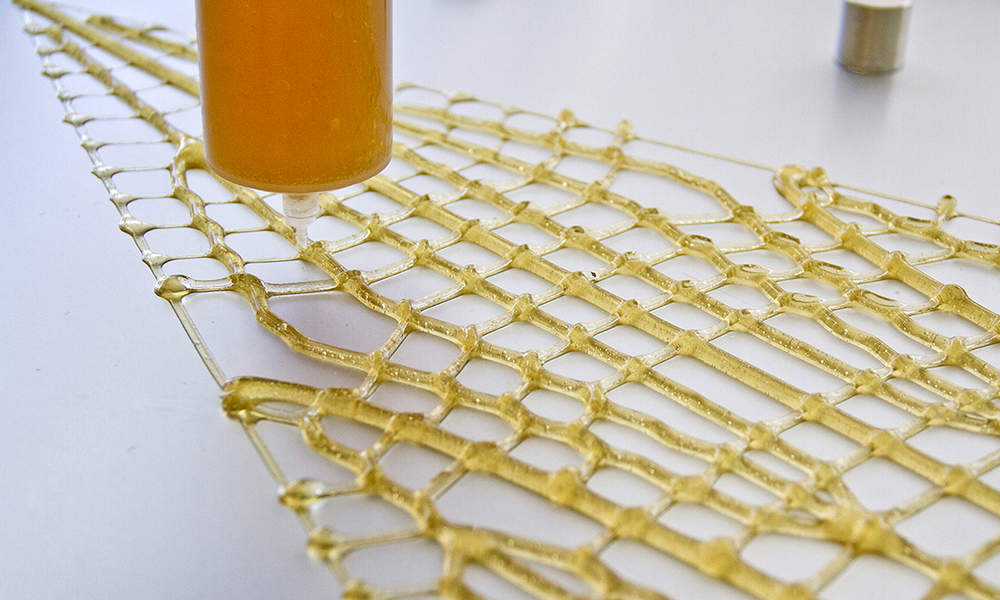 Neri Oxman, a visionary researcher from MIT, got inspired by this material and wanted to adjust its properties to generate structures that are multifunctional out of a single part. So, along with the researchers of her team, they used shrimp shells to produce chitin and they 3D printed it. The result is stunning. They managed to produce a 100% recyclable, environment-friendly 3D printing material. They 3D printed a one-piece 12 feet-long structure that consists of a single material with different densities. The big achievement of their experiment is that they managed to generate structures that allowed the transition from beam to mesh, and if scaled larger, to windows.

The vast potential of this biodegradable 3D printing material is pretty obvious. It is a natural material that can be found in abundance (crustacean waste material), therefore in its raw form it is very cheap. The chemical process to modify it and/or deacytilate is simple. It is recyclable and it has great properties. It can be 3D printed at any scale and it is environmentally friendly!

We invite you to see the full TEDx talk of Neri Oxman to get the full picture around this enviromentally friendly 3D printing material:

The potential of 3D printing with graphene

Graphene is considered to be the wonder substance that will change the future of the 3D printing industry. It is the strongest material on earth, 10 times stronger than diamond and 100 times stronger than steel. Imagine if we could 3D print such a stiff material! But what exactly is graphene?

Graphene is an atomic-scale hexagonal lattice made of carbon atoms. It is due to graphene’s physical properties that it can enable various usages. Since the atoms of graphene are structured in a 2D structure, scientists are experimenting with applying them in the 3D space in order to create lattices and strong structures.

In this experiment, they combined science and engineering to simulate the procedure of 3D printing with graphene. The scientists used a gyroid – an object that could be 3D printed in a common material and in bigger scale than graphene.

So, by mimicking the lattice structure of graphene at this scale, they tested its performance under some compression tests. Check out this blog post about 3D printing with graphene to get to know more about this experiment and its results.

Promising as it sounds, 3D printed graphene could have many applications, in various industries, from electronics industry to the medical industry. Due to its physical properties it could be also possible to create thin and transparent objects like touch screens. Moreover, graphene could help to create smaller, faster and more efficient energy computers as well as more efficient solar cells.

Even if 3D printing with graphene at an industrial scale is still not possible, scientists are working on it. Nevertheless, it is very interesting to explore its potential, as it is sure that it will revolutionize the world of 3D printing materials as we know it today.

It’s been two years since Neri Oxman and her team introduced us to the idea of 3D printing with glass. In 2015, the research team of MIT Media Lab’s Mediated Matter Group introduced a technology to 3D print molten glass. The results that the scientists published were stunning considering that they introduced the first 3D printed glasses of this kind. The products that were 3D printed with glass, were objects with gradated profiles, colors, and opacities that, when internally illuminated, scattered light in complex caustic patterns.

In 2017, at the Lexus Yet exhibition in Milan, the same team revealed the results of their research on 3D printing with glass. They set an installation that demonstrated the technology’s progression. “Glass II” installation consisted of three 3-meter-tall columns, of 3Dprinted glass. Each column had a unique and constantly changing profile. The unique profiles of each 3D printed layer were creating the visual effect of amazing kaleidoscope-like patterns of caustics. The scientists put them on full display using a LED luminaire programmed to travel up and down the inside of each column. This was the first time glass was 3D printed at such a big scale.

The technology of 3D printing with glass evolved significantly over the past two years. The scientists managed to go from tabletop size to architectural scales, and this is just the beginning. Research is still going on around glass as a 3D printing material, in order to reach its full potential, even in production quantities with large 3D printers.

From paper printing to 3D Printing with Cellulose

Cellulose is the most abundant organic polymer in the world. It can be found in plant wood and cotton fibres. It is used in fabrics and for centuries it has been the basis of printed paper. The scientists of MIT explored the potential of integrating this bioinspired material into 3D Printing technology potentially providing an alternative to the polymers currently used as 3D printing materials. 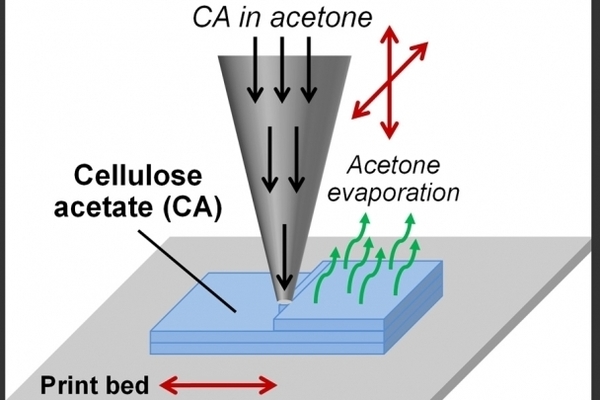 Cellulose is the key component that is giving wood its mechanical properties. And because it’s so inexpensive, it’s renewable, biodegradable, and also very chemically versatile, it’s used in a lot of products. Cellulose and its derivatives are widely used in pharmaceutical products, in food additives, in building materials, in clothes and many more fields. Since all these fields have already embraced the 3D printing technology, we realize that the entry of cellulose acetate in the additive manufacturing industry would significantly broaden its potential.

The research about the discovery of new 3D printing materials inspired by nature will never stop. As the additive manufacturing industry is growing stronger and stronger, needs for new environmentally friendly materials are arising. All the materials we mentioned above: graphene, cellulose, and chitin are renewable and can all be found in nature. Easy or not to 3D print, they hide a big potential that the researchers are trying to bring to the light by combining science and engineering. We hope that scientists will continue to find inspiration in nature and to investigate the possibilities of biocompatible 3D printing.

If you are interested about new 3D printing materials and technologies, have a look at our latest article about 3D printing with graphene and about the rise of 4D printing technology.