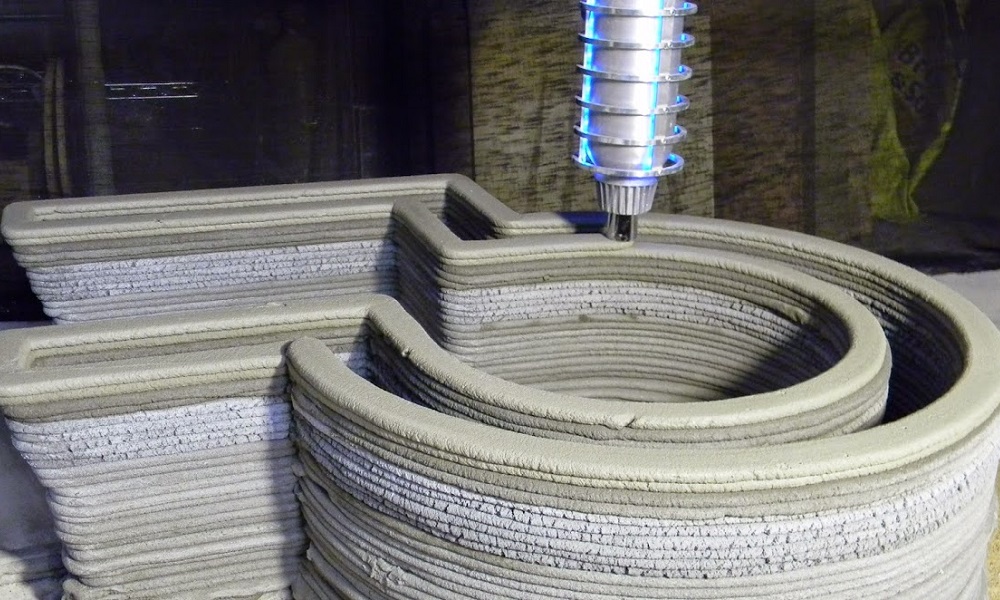 Concrete 3D printer: the new challenge of the construction business

Construction 3D printing is a real challenge, but 3D printing structures at an architectural scale tend to be more and more doable. A lot of new 3D printers are arriving on the market each year, always faster and more powerful. As we saw in our review of 2017, the industry seems to focus on large-scale 3D printers, especially for metal 3D printing. The aim is to 3D print bigger parts and realizes bigger projects. But plastic and metal are not the only materials revolutionizing the 3D printing industry. Indeed, concrete 3D printing is starting to emerge and will change the construction business in the upcoming years. Concrete 3D printers are now sophisticated, and a lot of successful experiments have been led.

How 3D printing concrete can help the construction field?

It is not new, building a concrete structure like a house, a bridge or any architectural feature is time-consuming and expensive. Different tools are developed to get cheaper and faster processes to build concrete structures. Once again, additive manufacturing appears to be a good solution, as it allows to save labor costs and to build faster.

A robotic machine would be a great help, as it could work continuously. 3D printing could facilitate the production of structures and change the construction industry. With 3D printing, time-saving is impressive and unbeatable. If 3D printing can help a lot of sectors like the medical, fashion and automotive industries, it could also be a great asset for architecture. Fortunately, even if large scale 3D printers are still big challenges, they are more and more interesting and sophisticated.

The list of materials that it is possible to 3D print has grown significantly during the last years. Why couldn’t we print concrete?

Tests for automated constructions have been made quite early. It is proof that there is a need to facilitate the building process. This will of creating concrete 3D printers was born around 1950 by testing a robotic bricklaying machine. In the 1960s, an automated machine using isocyanate foam and pumped concrete has also been developed. The technology was not mature enough at this time, and these experiments were not really conclusive.

In the 2000’s, new construction techniques were developed, trying to imitate concrete. For example, the D-Shape technique has been developed, creating stone-like objects. This technique is particularly interesting, and the ESA (European Space Agency) is planning to use it to 3D print a base on the moon. This is the proof that construction 3D printing can be useful for many different applications and projects.

A concrete-like material has also been 3D printed by the researcher Behrokh Khoshnevis. This method is called contour crafting. This researcher plans to build houses quickly in order to help people after natural disasters.

Successful 3D printed projects in concrete for the construction field are recent. The technology was not mature enough before that, and machines were not developed to print large structures, at an architectural scale. Now that there is a growing interest in large scale 3D printing and that the 3D printing field is advanced and taken more seriously, those construction projects are worth considering. These large scale 3D printers are using the same printing process as technologies such as FDM or FFF, using X, Y and Z axis. Just like FDM 3D printers, they are controlled by G-code, guiding the print head during the printing process. But concrete 3D printers are using concrete based materials instead of plastic filaments. These printers are using concrete, or a concrete mix, optimizing the buildability of the material. Contour Crafting is the most promising concrete printing method, but other techniques can be used. The idea is the same, but the way the reinforcement is installed can be different. Other differences can be noticed like the thickness and geometries of 3D printed walls during the construction. Indeed, concrete 3D printing is becoming a big advantage, but 3D printed homes are not created with only four concrete walls. That is why concrete mixes have to be made, to ensure thermal insulation, to keep good energy efficiency.

The Loughborough University, in England, started to explore the possibilities of concrete printing in 2008. If 3D printing is not a new manufacturing method, it is new to deal with concrete material inside of an automated robot. Indeed, they developed a manufacturing process, using robotic arms to deposit the material in order to get the desired shape. They are working on modern architecture, playing with lines, curves and forms. Here is the result of one of their additive manufacturing experiments:

Now, different 3D printer manufacturers developed their concrete printer, in order to revolutionize the manufacturing process and to build impressive houses. For example, Total Kustom, or XtreeE, are manufacturers working on professional concrete 3D printing. We will see later in this blogpost all the 3D construction printers available and what it is possible to achieve with them.

What are concrete 3D printers able to do today?

Now that we know that large-scale additive manufacturing systems exist, what is it possible to do exactly with them? Are the printed structures strong enough?

Concrete 3D printing is mainly used for tests for the moment, to see how this amazing technology could be used. We already see that it will soon be a real asset for architecture. Indeed, everything is 3D printable: concrete walls, concrete blocks, etc. Let’s see what impressive and revolutionary projects are now doable thanks to these new processes.

You certainly already read popular stories about entire houses or entire buildings, built thanks to 3D printing. That is impressive and it is now totally possible. For example, there are now some fully printed houses, built in just 24 hours. The 3D printing process is quite fast, and offering new opportunities, completely revolutionizing housing construction. 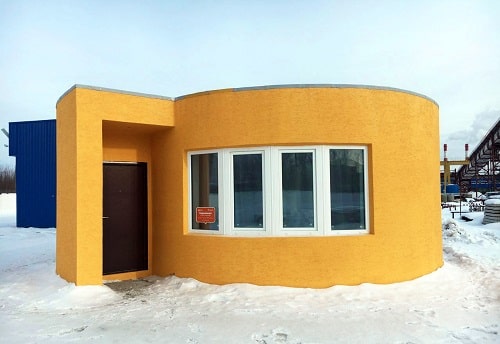 3D printing doesn’t mean that the construction field doesn’t need workers anymore. Indeed, now, operators are needed to control the concrete 3D printers like any other construction systems, and these structures can’t build additively without a flat surface and solid foundations. This technology can only be used by professionals.

Additive manufacturing is offering new advantages for the construction sectors. Some 3D printed bridges are already visible all around the world, from stainless steel bridges to concrete bridges.  Concrete 3D printers are also offering a good time-saving option for urban construction. It is now a great solution to build pedestrian bridges. Here is a picture of the world’s first 3D printed bridge in concrete, in Netherland: 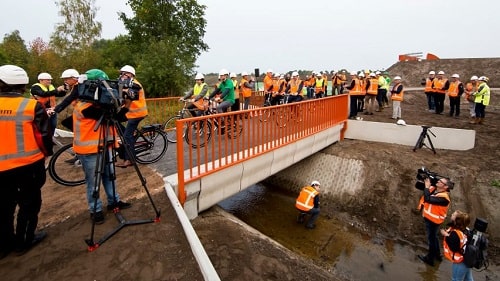 Concrete printers allow to create many different structures, architectural trials, like this 3D printed castle built in a garden. It has been developed by Andrey Rudenko. 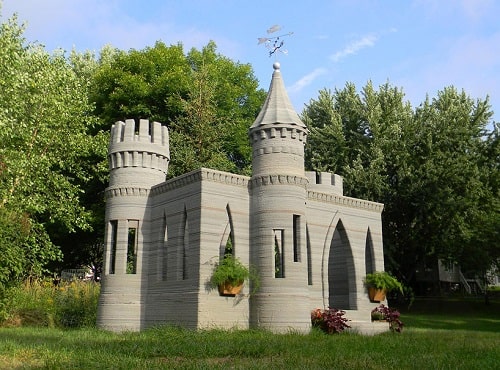 These printing tools could also be useful to build architectural designs. These projects are smaller than a house or a bridge, but 3D printing allows them to create any features of the urban space, like this column developed by Amalgamma. 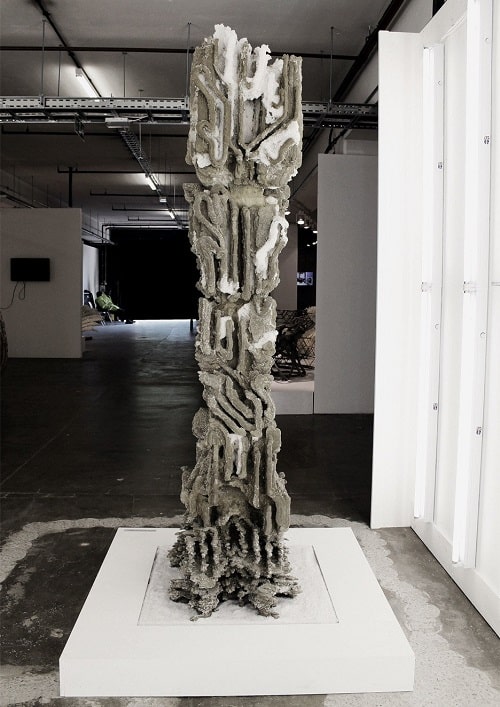 ZHA Code used the concrete 3D printers of the company XtreeE to create concrete pieces of art like this vase. Additive manufacturing is also a new construction technology, allowing freeform construction. Indeed, it can help to build 3D printed houses, bridges or structures with any form. 3D concrete printing is a way to challenge all the limits of construction.

It is just an insight of all the possibilities that you have with a concrete 3D printer. It is obviously becoming a new asset for urban development.

Some 3D printers are building very big structures, but with no particular accuracy. Some other machines are able to 3D print smaller and accurate structures. It really depends of the project. Let’s see what are the 3D printers developed to print concrete.

What are the concrete 3D printers on the market?

To print entire houses in just one part, a 3D printer has to be larger than the expected building. But we can notice that there are different kinds of 3D printers. Most of the machines listed here are mobile 3D printers that can print directly on the spot. They are made with cranes and have a robotic arm, able to deposit the concrete layer by layer where it is needed. Some other manufacturers are also printing large concrete parts that they are sending to the construction site afterwards.

Here are some examples of advanced concrete 3D printers. This list is not exhaustive, but it will give you good insights on what is already existing and what the most promising technologies are. 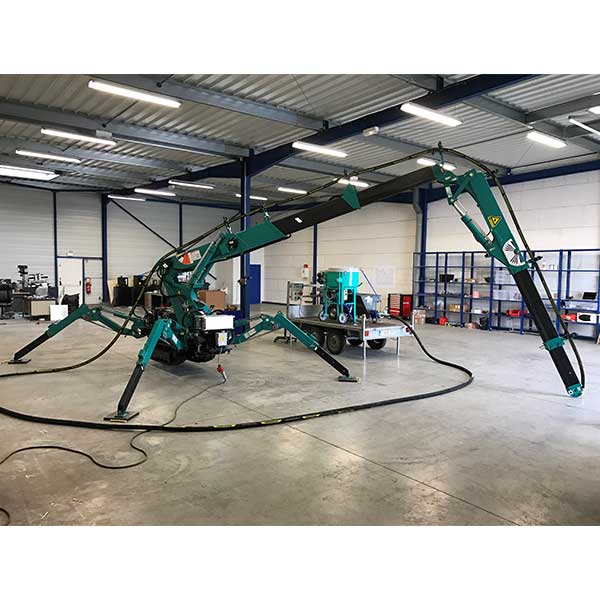 The benefits of concrete 3D printers

Printing at an architectural scale is difficult, but concrete 3D printers have some real game-changing benefits. Here are the major advantages of this technology:

All of these advantages are real, and as the technology is improving, these benefits will be even more numerous.

The future of the concrete 3D printer: Some challenges left

Some aspects have to be improved, like the accuracy of some printers. Moreover, the future printers have to be totally movable if the manufacturers want them to be used everywhere.

To develop construction 3D printing, laws and authorisation have to be modified, because it is not possible for the moment to 3D print a house anywhere you want. That is why most of the 3D printed projects to build houses are located in China or Philippines, etc. But not in Europe!

We are certain that this technology will evolve fast, now that some first successful and impressive constructions have been made. Who knows, maybe you will have the opportunity to live in a 3D concrete house in the future. At Sculpteo, we will give you all the updates about the future 3D printed projects made with concrete 3D printers. Don’t forget to subscribe to our weekly newsletter!

If you want more information about architecture and additive manufacturing, check out our article about construction 3D printing.

If you are working in architecture and interested about 3D printing, you can read our previous article about 3D modeling software for architecture!