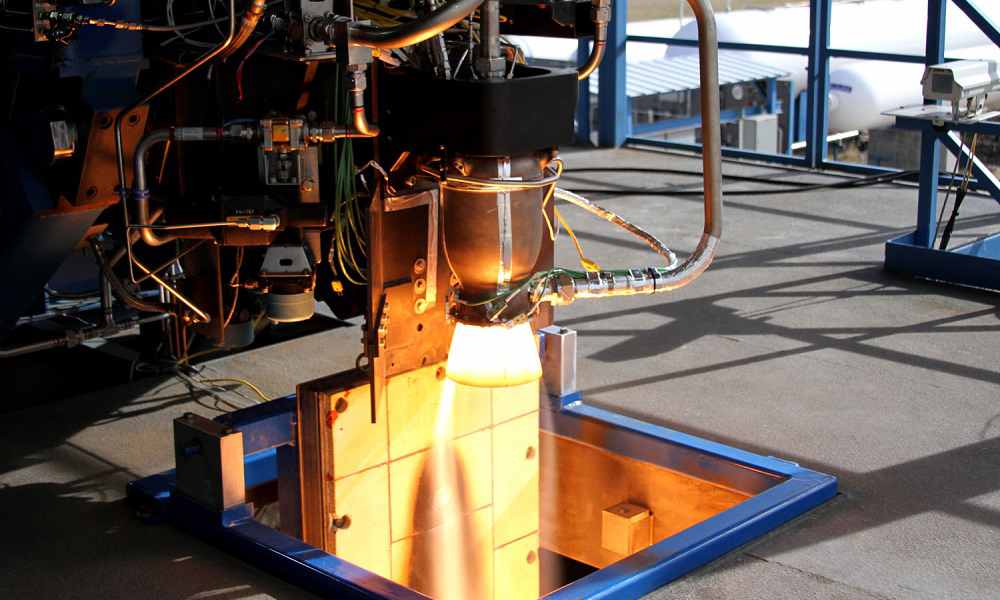 3D printing is offering a lot of possibilities for many industries, and aeronautics and aerospatial are some of them. These industries are actually making the most of this technology, both for prototyping and production. Many mechanical items can be created thanks to additive manufacturing. In this blogpost, we will discuss 3D printed motors.
First, we will see how 3D printing is helping to create mechanical parts, and how it is now possible to produce a 3D printed rocket engine. But is it possible to create an entirely 3D printed rocket? We will also show you many examples of 3D printed motors and full rockets, that will give you a great overview of what it is possible to do. Let’s see how rocket production could be improved thanks to this technology and get ready for space exploration!

Why 3D printing a motor could be a great advantage?

This advanced manufacturing process can really be a great asset for engines production. Using 3D printers for prototyping and for production has many advantages and could help you to improve your product development.

Additive manufacturing is known to be a good prototyping method. It is allowing the manufacturers to make many iterations at a lower cost and quite quickly. Moreover, as you have to work on a CAD software to create your parts, you only have to make modifications on your 3D file if you need to change something. It is really allowing to work way faster than with other processes.

Indeed, the 3D printing technology is evolving really fast and many resistant materials are now entering the market. When it comes to aerospace and aeronautics, it is important to have heat resistant parts, especially if you want to produce rocket engine components.

In aerospace, additive manufacturing is often used to create lightweight components. It depends of the 3D printing material that is used, but 3D printed structures can be way lighter if the design is well optimized, and if the right material is used.

3D printed motor projects are mostly developed in the aerospace industry for the moment. But this manufacturing process could spread to the automotive sector quite soon. 3D printed spacecrafts are now a reality. We saw in a previous blogpost that space and 3D printing are linked and that it is already possible to print in space, or to send in space 3D printed parts.

The NASA and the ESA are really interested by this fabrication process, they see all the benefits of this technology and how they could use it for the prototyping and for the production of mechanical parts. Indeed, this technology is allowing to work on designs, and to create complex geometries really easily. That is why this technology is beginning to be interesting for some projects, as for example, to manufacture motor parts. A lot of recent NASA tests are including the 3D printing technology. We will talk about the RS25 later in this blogpost!

But you can also use software such as CATIA that are professional software that could help you with complex geometries.

The goal of Relativity Space is to rethink the way we manufacture rockets and use 3D printing technology to build the whole rocket. This aerospace startup based in Los Angeles believes that the future of humanity is interplanetary, that is why they want to start building the future of humanity in space. All of this is developed in the spaceport of Cape Canaveral, in Florida. Indeed, thanks to a deal with the US Air Force, the company can use a site at Cape Canaveral Air Force Station, called LC-16.

The company is sure that the traditional manufacturing process of rockets can be improved and simplified. Instead of complex assembly lines, lots of people working on the same vehicle, rocket’s parts can be 3D printed by large 3D printers. To rethink this production line Relativity Space had to develop its machine, called Stargate, and create its rocket factory. The company owns the largest metal 3D printer, able to create parts that are 20 feet tall and 10 feet wide, going from raw material to flight in less than 60 days, claims the startup.

Thanks to additive manufacturing, their Terran 1 rocket is the most cost-effective launcher in the world.

Orbex is a UK startup that launched the largest rocket made using metal additive manufacturing. The entire rocket, including the engine, is 56 feet tall.

The company worked with aerospace engineers to manufacture this impressive Stage 2 rocket. This 3D printed rocket is printed in a single part, without joins, making it lighter and more efficient than traditional launchers. Indeed this rocket should be more resistant to pressure and extreme temperatures due to its absence of joins and welds. It has been printed using SLM solutions, with carbon fiber and aluminum composite.

Orbex is aiming to pull off its first orbital launch from Scotland, but we will have to wait for 2021 to see it. 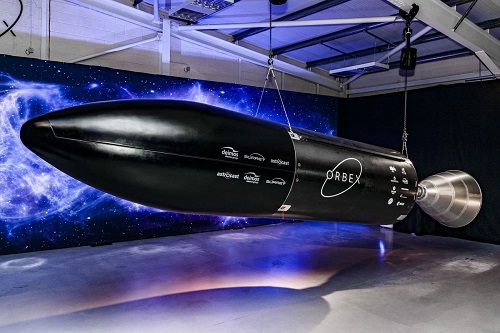 This project is the proof that new 3D printing materials now have impressive properties. A group of students, the MIT Rocket Team, tested a fully 3D printed motor project. Most of the time, rocket engines are made with metal materials, but this rocket engine has been manufactured with plastic. It seems risky, but the results of the experiments are here: the rocket has been tested twice, and it was a real success.

Watch the video below to see the experiment:

This motor has been 3D printed in only 24 hours. This rocket engine has been developed by a US company called RocketLab. Details about the materials and the manufacturing process are not available, but we know that additive manufacturing allowed them to create important engine components really quickly. This process allows to get  lighter parts, thanks to an optimized design. Here is how the 3D printed engine made by RocketLab looks: 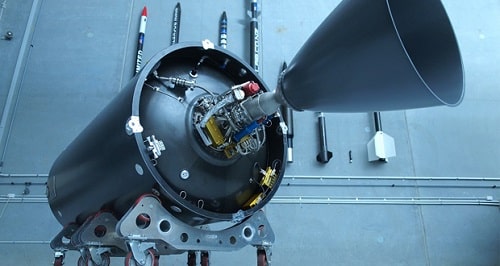 Here is another 3D printed engine created by engineers in the Australia’s Monash University. 3D printing allowed to create a rocket with a different shape, to improve the propulsion of the rocket. The goal of this experiment was to work on a new design to make the rocket even more efficient, and 3D printing is the best method to improve this aspect really easily.

This manufacturing process definitely allows to work faster: this project went from project to testing in only four months. At the end, this engine and its aerospike design succeeded the hotfire tests! 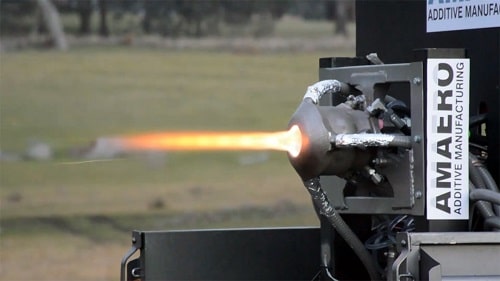 Engineers working for the NASA prototyping a rocket engine

SuperDraco, an engine made thanks to additive manufacturing

3D printing: A way to reduce costs for the NASA

Creating motor parts using 3D printing is actually helping the NASA to reduce engine costs. Indeed, it is allowing them to get more affordable parts. 3D printing complex shapes in just one part allows to avoid welds. Indeed, optimizing the design helps reducing the number of welds, and it can obviously reduce costs and production time. That is why this manufacturing process will be more and more used in the future to build rocket engines for the NASA tests.

3D printing is really seen as a serious technology. It has even been part of the recent RS25 tests. The RS25 engine is the most powerful rocket engine ever created. This Space Launch System has a 3D printed component called pogo accumulator, a shock absorber placed inside of the rocket engine. 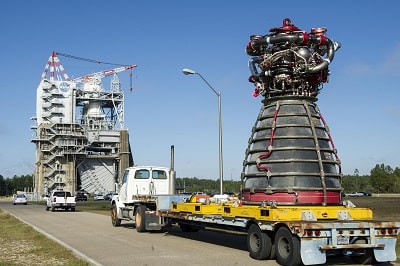 We already talked about Christopher Laimer in a previous blogpost about 3D printed watches. He also created a 3D printed mechanism to build a 3D printed brushless DC electric motor. This 3D printed motor is made with magnets in the rotor that are arranged as Halbach array. 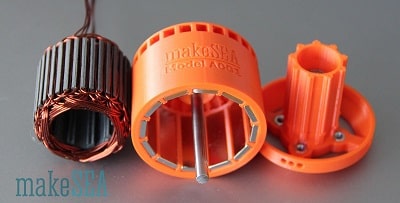 The future of 3D printing for rocket engines

New 3D printers and new 3D printing materials are now appearing on the market, allowing to manufacture impressive projects. For example, metal 3D printing is becoming more and more accurate, which is a real game-changer for many industries.

Printer manufacturers are also developing large-scale 3D printers. Instead of components, it will be possible to print larger parts more easily. Last but not least, more and more impressive 3D printing materials are developed each year, which makes the future of 3D printing really promising! Thanks to Relativity Space and Orbex, we can see now that 3D printing an entire rocket is becoming a reality, but these companies are ready to go further

It will be more and more common to send 3D printed engines and 3D printed space shuttles for deep space missions. 3D printed mechanical parts are now a reality. Once again, with 3D printed rocket engines, this additive process is showing that it is possible to improve the product development and the product itself very easily.

You need to 3D print a project, for prototyping or production? Upload your 3D file on our online 3D printing service right now. Don’t forget to subscribe to our weekly newsletter if you want to receive directly all the news about 3D printing applications