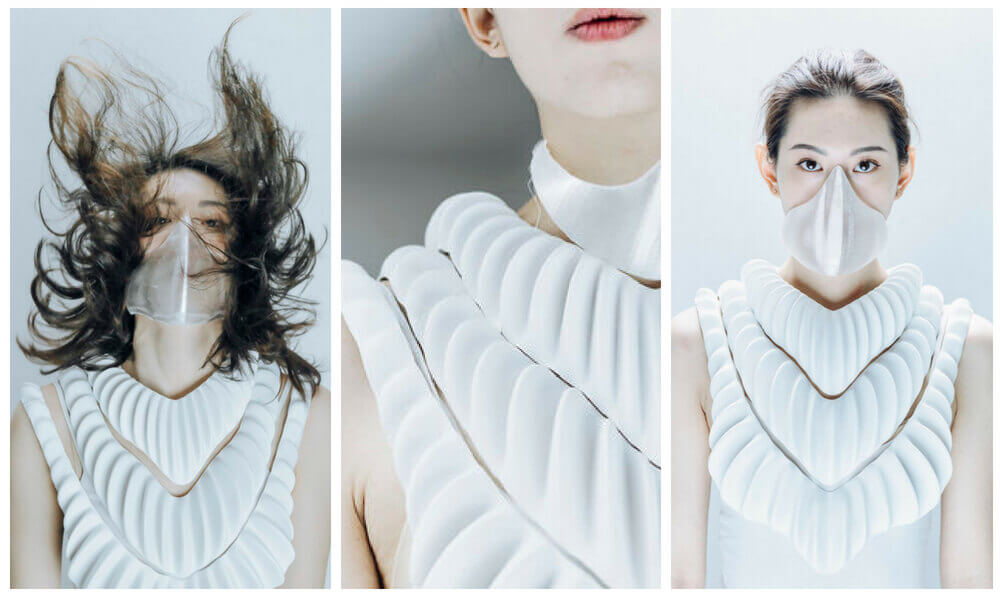 How a designer used 3D printing for human gills

Have you heard of Biomimicry? It’s a way to get inspiration from nature and find solutions to our problems in it. It’s also especially useful for designers, as nature very often provides them with perfect ideas to resolve design or patterns issues. One of the concepts of Biomimicry is to reproduce animals’ features, for instance, fish gills. In this blog post, you will find one of the most interesting nature-inspired project we could find: 3D printed gills for humans.

Global warming is very worrying and we need to think of solutions to survive it. How to do it? What changes are to come? Jun Kamei, Biomimicry designer, and Material Scientist asked himself those questions and joined the forces of Tokyo University Institute of Industrial Science and London’s Royal College of Art (RCA). Kamei identified a major problem: he predicts that by 2100 the water will rise so high we will have to adjust our lives accordingly.

The answer came with his 3D printed organ: Amphibio, the gills for humans. The idea occurred to Kamei out of his concern for humanity’s future due to the global warming. Whilst working on his project, he gathered the inspiration from nature: the concept of human gills is for them to have a breathable form. That form wouldn’t be achievable without 3D printing. Additive Manufacturing also allowed for the use of a special material to print the gills with. Without those two aspects: the form of the gills and the material, the human gills would only stay as a concept. Thanks to 3D printing the project came to life. Let’s see exactly how they work in the next paragraph.

How do the 3D printed gills work?

The 3D printed gills are made out of 3 parts in a circular shape. They are worn around the neck like a bib. Thanks to 3D printing Kamei was able to achieve nature inspired complex shape of his device as well as a breathing material. Amphibio is 3D printed with a special porous hydrophobic material. The material replenishes oxygen from the water and dissipates carbon dioxide that humans breach out.

Kamei presented the prototypes and performed a test in a tank. He connected the gills to two tubes. The left tube is filled with 70% CO2 gas to imitate the level of CO2 when we exhale. The second tube was acting as a sensor to monitor the Oxygen level inside the gill.

The designer explains the process in detail: “The system is enclosed with airtight one way valve, thus the only way oxygen could be replenished in the gill is through the membrane from the surrounding water, the surrounding water has oxygen dissolved into it, and because the percentage of oxygen is low inside of the gill, these oxygen molecules in the water travel through the membrane inside of the gill to compensate the concentration difference.”

The project is now a prototype but has a great potential. After all, airplanes didn’t fly on the first try, many tests had to be done first. Kimei explains that to use Amphibio “enough surface area [of the gills] needs to be secured around the body.” and “Secondly, a safety measure needs to be in place which monitors the oxygen level and could switch to a smaller emergency gas tank in case the gill does not provide enough oxygen.” And finally, it would need to be tested in “a controlled aquarium with human oxygen consumption simulation.”

Biomimicry allows for us, humans, to get inspired by nature and learn how to use its solutions to solve our problems. It came as an answer to designers and scientists for many issues, from 3D printed skin to heal severe burns to tree-like structures for lightweight airplane parts made only thanks to Additive Manufacturing. Nature can truly change our lives.

Have you heard about other amazing projects inspired by biomimicry? Let us know in the comments!
Stay up to date with the best 3D printing news by signing up for our newsletter and follow us on Facebook!